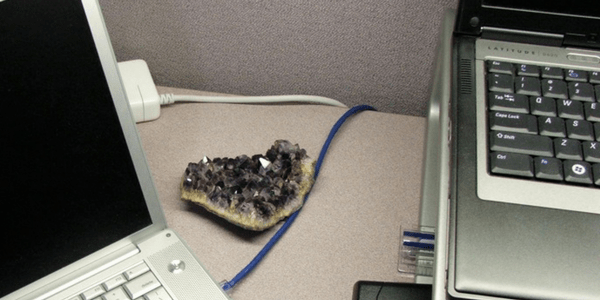 The witchcraft of the 21st century is changing rapidly. Today’s craft is characterized by a certain spiritual laissez faire, DIY aesthetic that is less concerned with following complicated spells or rituals laid out 50 years ago by our elders, and more resembles a philosophy that infuses day-to-day life. The contemporary witchcraft ethos is about manifesting whatever it is that the witch is working to bring into the world, be it peace, love, power, health, equity, feminism, or anything else.

Contemporary witchcraft looks similar to chaos magick in many ways. As the craft has evolved over the past 50 years, it’s gone from a religion that initiated one person at a time to a wonderfully rich and diverse path that can be taken up by literally anyone at any time. Digital tools, such as social media, have allowed witchcraft to flourish, and the many solitary witches who have taken up their own learning have infused the tradition with endless variations. At its core, witchcraft today is a Pagan tradition that combines elements of ceremonial magick with traditional and folk magick. And, since the 1980s, where there is ceremonial magick, there is chaos magick –witchcraft is no different in this regard. 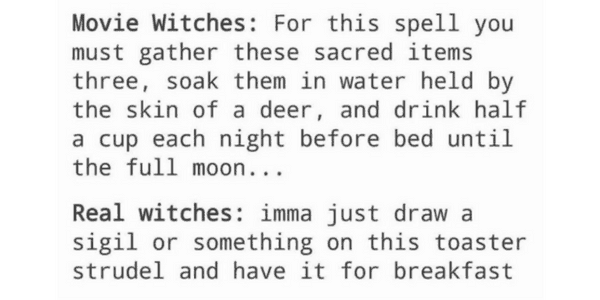 I love this meme! It’s funny, sure, but it speaks to the resourcefulness of witches who practice the craft every day. Contemporary witches have endless “witch hacks” that help make the mundane day-to-day more magical. Social media can be a huge source of inspiration for witches, but also something of a ritual laboratory.

The creation of spells via social media isn’t just easier, the spells also have a greater reach in terms of who can see and interact with them. Of course, lots of witches aren’t keen on short cuts, but one of the amazing things about witchcraft is how adaptable and individualized it can be—it’s flexible and accessible for anyone interested in it.

The art of emoji spell casting isn’t new — an article on the subject published in Broadly in 2015 went viral in online occult circles.1 So it’s not surprising that witches have found lots of other ways to cast spells and do ritual work online. The work makes clever use of social media platform features, and is simple to learn and use. Emojis look a little like sigils, and actually function like sigils too. Emojis are also symbols, and carry embedded and contextual meanings. They are graphic representations of ideas and desires, and they function as a quick, throwaway short hand — perfect for creating an intention, setting it loose, and forgetting about it, as one does with traditional sigils.

Speaking of sigils—there’s also an app for that.

Related: Sigil magick: Down and dirty, by Donyae Coles

So, beyond emoji spells and sigil apps, how can social media aid you in your ritual craft?

Each social media platform has a unique and elegant place in the digital witch’s online spell kit. On platforms like Facebook, Twitter, and Tumblr, “likes” or “loves” can charge up a spell cast in a post or a tweet. A share, retweet, or reblog can recast the original spell. So, looking at the major platforms:

Facebook: Posting and reposting memes means that the images and embedded ideas get more attention each time your friends or followers see them. You can post an emoji spell or an image of a sigil, releasing it from your conscious awareness to do its bidding in the world. Likes will charge it up, as noted above, and shares will continually recast your intentions into the world.

Twitter: The brevity required by Twitter (RIP the 140 character format!) means that each tweet has to be distilled to its essence. It’s also perfect for emoji spells, which are usually a string of no more than a dozen characters. Each time you tweet, you’re sending out a direct message to the universe that followers can interact with at will, even if only to glance at it. In keeping with Austin Osman Spare’s technique, you tweet and move on — magical intentions disseminated via twitter aren’t the ones you check and recheck for likes and retweets!

Snapchat: This is excellent for images or messages that you want to be seen before they disappear. In a way, it’s perfect for the classic sigil technique that Spare created, where a created sigil is to be made and then forgotten –Snapchat eliminates images after they are viewed. There are also fun filters that can allow users to try on personas — whether filtering for beauty and allure, or humour and irreverence.

Pinterest: Allows users to save (or “pin”) images or videos to virtual bulletin boards. There is a huge repository of witch-related content here — from complete rituals for any full moon (Wolf moon, Snow moon, Super moon, Blood moon… you get the idea), spells you can use or tweak to your preference, altar and book of shadows inspirations, and lots of divination ideas including an endless variety of unique tarot spreads, not to mention occult jewellery and fashion. You can “love,” and repost here, similar to other social media, but I think the main benefit Pinterest brings to witches is the ability to keep ideas in one place — to collect images, spells, rituals etc. in an online repository where you can rearrange, adjust and categorize the content at will.

YouTube: YouTube for witches functions the same as YouTube for any DIY enthusiast—witches can learn pretty much anything here, from yoga to the Lesser Banishing Ritual of the Pentagram; candle making, ritual construction, and documentaries like Häxan and The Burning Times — it’s all here.

There are also options for divination online. Some of my favourites are the Salem Tarot (a free three card reading), the Deja Deck (“Suffering is hip”), and I should probably be more embarrassed by how often I’ve consulted the Yes/No Oracle in the past. Paige, aka The Fat Feminist Witch (She has a great podcast about activist witchcraft!) does regular tarot card pulls on her Instagram page for followers.

Related: How to use technology for better magick, by Donyae Coles

Related: Necromancy in the digital age, by Lary Love Dolley 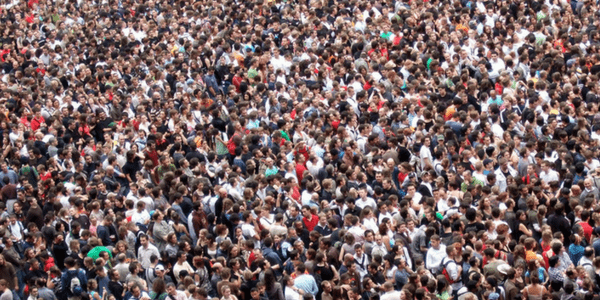 Social media allows modern witches to innovate in the ways they practice their craft, expand their magical reach, and connect with one another online. Each platform has distinct advantages that creative witches will continue to refine to perform their individual and collective rites. These digital spaces also allow witches to work together on projects of international scale.

Witch activism has become especially active in the last couple of years, as Christian conservatism has increasingly infused world politics. One awesome example is the notorious anti-Trump witch activist movement #bindtrump, with its Facebook group, app, and active Twitter presence. Online witch activism has flourished in other places too, using digital means to do magical work — both the Yerba Mala Collective and W.I.T.C.H.pdx distribute their zines digitally.

Related: Some thoughts on the mass ritual binding of US president Donald Trump, by Aaron Leitch

Related: #HavamalWitches: We are the witches the Havamal warns you about, by Jade Pichette

Digital spaces in general, and social media specifically, offers witches so may exciting new ways to seek out information, disseminate their work, perform magick, and connect to other witches. It’s wonderful how the craft has evolved online, allowing more witches access to the information, tools, and community that we need.

The conveniences of technology have also informed the types of spells that modern witches work with, giving us new tools like memes, trending hashtags, and emojis to mobilize and maximize magical impact. It’s an exciting time to be a witch, and to appreciate how far the craft has evolved and continues to grow.