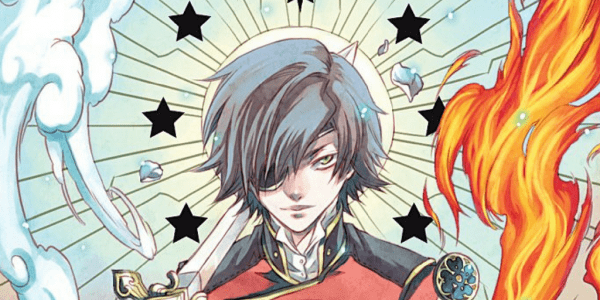 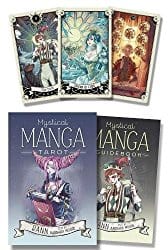 I love manga and anime so I was excited to get my hands on the Mystical Manga Tarot illustrated by Rann with text by Barbara Moore. What I found was a densely illustrated, sweet deck that was perfect for beginners and quick readings.

The Mystical Manga Tarot comes in a large box that closes with a magnetic clasp. The box cover features the High Priestess card against an attractive grey and light blue background. Despite the cards being illustrated in the style of manga, the deck felt like a serious one, not something made “just for kids.” Inside, the book is a full size colour paperback. Underneath that were the cards.

No additional bag was given, so if you are looking to use these cards as your carry deck, you will need to purchase or make another pouch. It would have been nice if something had been included with deck, because the large case is not meant for carry, but this is a small issue, and I mention it only so that folx are aware of it.

The book, as mentioned before, is paperback and full colour. I was surprised when reading the book to find that the text is really dedicated to the beginner. I haven’t seen very many decks aimed at beginners lately. The book opens with common learning questions that people brand new to tarot have. There is also a glossary of common terms to help newbies get used to the lingo of tarot.

It’s clear that this deck is aimed at beginners, but it goes a little above and beyond, in that it includes sample readings with the spreads. Each sample spread, of which there are a few, includes an actual reading were you can clearly see how the cards can be interpreted by the reader using the book. I have never seen this done in a deck before. I had only seen sample readings of this nature online and in some older, standalone tarot books. I loved this touch! For people who are brand new to the cards, providing this part in the book creates a sort of one stop reference guide for really getting started. It also talked about different ways that new readers could practice and suggested reading for television shows, which I thought was so fun and innovative (and something I had been thinking of doing myself!).

The cards’ meanings written in the book are standard to the Rider-Waite-Smith (RWS) meanings, and reversals are included. In this part of the book, there is nothing really shocking or new. Each card is reprinted in full colour in the book for easy viewing.

One final, small surprise from the book, there is an interesting take on the Fool’s Journey in the back that has been written, card by card, as a sort of narrative. For people who are new to tarot or just those that like a fun story, this is a nice and unique touch.

The cards themselves are standard tarot cards. The backs are fully reversible. The cardstock is a bit weak, but they shuffled well. The colours are vibrant and it’s easy to read the images. The naming and numbering of the cards is standard. This is, for all intents and purposes, a RWS clone, so people familiar with that deck will have no problem working with this one. 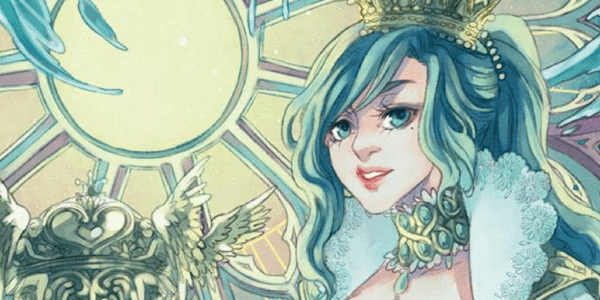 The art is manga style with nod to high fantasy. The artist clearly knows the genre, and the aesthetics match what we would see in the comics themselves. More than just the eyes, the way the figures hold their bodies, the ornaments on their clothing, speaks back to the source material.

Of course, there is a downside to that. There is little to no diversity in this deck. It is as racially and physically homogeneous as manga is. Although there are some people of colour scattered throughout the deck, they are few and far between. Everyone has the same body type. Regardless of that issue, the art is attractive and well done.

Reading with this deck was simple and clear. My own readings matched with what was stated in the books. Because it’s based so solidly on RWS, if you’ve learned the keys of that tradition, then you can jump right in. That said, even if this is your first deck, it is very approachable.

Despite the art being based on manga, which is a popular comic style from Japan, this deck could easily work as someone’s main deck, even for doing client readings. The art is very bright and open, this is not a dark deck, and I think it offers a good neutral field for readings.

All in all, the Mystical Manga Tarot doesn’t add anything new and exciting to the world of tarot, but it is a great beginner deck for those looking to get stated, especially those who like the anime or manga style of art. Experienced readers may like to have it as RWS clone to do readings for younger people or at lighter parties. It’s a really strong, basic deck.