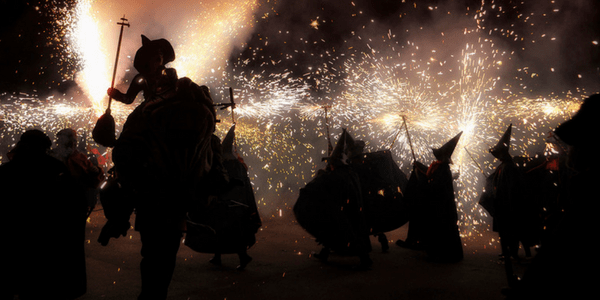 The current US presidency and political climate has mobilized citizen activists in unprecedented numbers. The rise of witch activism certainly has historical precedent, although today’s iteration, with its emphasis on social media as a means of disseminating and enacting magick, has interesting implications for enacting and mobilizing activism. That many self-identified witches are anti-fascist isn’t surprising, given their history as a persecuted group. As such, it’s logical that witches would be resistant to oppressive regimes. Many spiritual communities have traditionally mobilized against fascism, oppression, and inequality. For example, parishes offering sanctuary to draft dodgers in the 1960s and Syrian refuges in recent years, or providing shelter to the homeless in winter months.

Related: “Canadian Pagans taking a stand against bigotry and intolerance,” by Jade Pichette

Witches themselves are political, concerned with balance, ethics, equality, ecology, and living in harmony with nature. The Wiccan Reclaiming tradition expressly links spirituality to politics, making the connection between Reclaiming practitioners and activists clear. Witches also commonly share anti-oppressive ideologies with leftist activists: anti-fascist, feminist, anti-oppression, anti-racist, anti-capitalist and anti-censorship. If social media is any indication, millennials in particular are embracing not only Pagan spirituality, but also political messages. It probably doesn’t hurt that the aesthetics of witchcraft — from fashion to the accouterments of Pagan spiritual practice — translate well to visual expression as in social media.

Related: “The Girdle of Ishtar: Magick for activists,” by Nicole Rain Sellers

Feminist activism has found a natural home in the modern iteration of witchcraft, especially as practiced by a generation with sophisticated social media skills. Social media has contributed to the rise of witch activism, who is a fixture on Tumblr, Instagram and even Facebook. Each platform is used differently and lends itself to a different mechanism for activism. Tumblr works well for spells, manifestos, and information sharing — posts are generally image-heavy or short text meant to be prolifically re-blogged (or “tumbled”) through user’s personal sites.

This profligate sharing is ideal for magical purposes, as the reach of individual posts is practically limitless and the site is well-used by millennial witches. Tumblr, Instagram, and snapchat are all ideal for sharing images of political actions, but also spells, grimoires, virtual books of shadow, and of course images — witches evidently love to share their altars with one another and the world! Facebook is the standby for organizing groups and events, and is valuable for the cross-generational witch community, as its users skew older than on the newer platforms (like Instagram and Snapchat). Notably, posts on snapchat disappear after a period of time, which has implications for the sharing of secret messages or images for occultists and witches. The sharing of images and ideas makes witches’ political beliefs much more visible.

Today, the most prominent examples of modern witch activism are probably W.I.T.C.H.pdx (which references a previous W.I.T.C.H. movement from the 1960s), the Yerba Mala Collective, and the mass hexings in recent months since the US election in the fall of 2016. The hexings are particularly interesting; although print media reported on the events, the dissemination of the event, including directions for carrying out a binding spell, were propagated through social media.

Related: “Some thoughts on the mass ritual binding of US president Donald Trump,” by Aaron Leitch

As neoliberal ideologies spread across the globe, people are feeling more anxious and helpless in the face of fascism. Witchcraft can be a wonderful antidote to those feelings. As witch collective Yerba Mala points out, “‘witch’ is a non-consumer category, which makes witches entities that can transcend the capitalist hetero-patriarchy in unique ways.” Witches are historically persecuted and maligned, and often anonymous in public spaces. Why is witch activism so appealing to occultists? As noted, spiritual communities have a long tradition of activism; from sheltering Vietnam draft dodgers to providing shelter for the homeless, feeding the hungry… and of course, using occult strategies for dismantling systems of oppression. 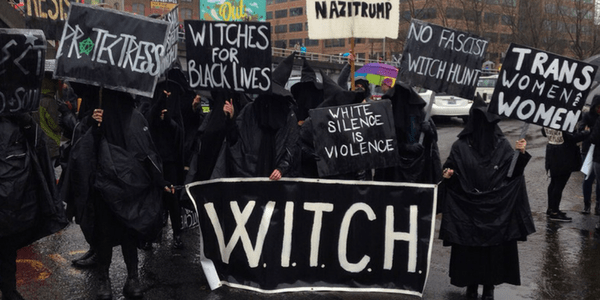 Historically, the most famous North American witch activism collective was W.I.T.C.H., the wonderfully named “Women’s International Terrorist Conspiracy from Hell”, which gained notoriety in the late 1960s. The group comprised feminist activists who felt that radical feminist ideology, with its emphasis on patriarchy, had settled on too narrow of a focus. They were anti-capitalist and felt the concerns of the working class were at least as important as the feminism of the second wave.

The original W.I.T.C.H. collective added an element of theatre to activism, using costumes and surrealist public protests in their political work. The modern iteration, W.I.T.C.H.pdx, makes manifest its debt to the earlier collective. W.I.T.C.H.pdx is an activist group from Portland whose mandate is starkly antifascist, anti-Trump and anti-oppressive. Still, their public face incorporates ironic and playful elements: using costumes to maintain anonymity, a tongue-in-check use of the stereotype of the witch as a black-clad woman with a tall pointy hat and broom. In addition to their mandate and history, their website includes resources on how to start your own local W.I.T.C.H. group that centres the voices of people of colour and transgender witches. There is even a zine to download!

The figure of the witch is a powerful symbol. Though most iconic in the popular imagination as a dramatic silhouette with a pointed hat and black garments, a witch can be anyone. Witches are not just from Europe, and don’t just practice Wicca. We exist in a broad range of cultures and traditions (and in fact, black and indigenous witches have historically been persecuted by witch hunts more than anyone else.)

We are everywhere. We are your sisters, your neighbors, your teachers, your bartenders, your mechanics, your check-out clerks, your drivers and your nurses.

Yerba Mala Collective is another active witch activist group with an online presence that preserves anonymity. Their members speak to press outlets about queerness and feminist politics, in addition to providing resources for other individuals or groups to hex the US president they call only “DT.” Their vision is expressed in a zine linked via Google Docs, which they encourage witches to disseminate for revolutionary purpose.

It’s hard to deny that “DT” has been a remarkable catalyst for increased metaphysical and occult activism. There have been multiple mass binding spells, informal calls to action for witches to deploy their energies to prevent further harm — harm in the form of restrictive and punitive immigration laws, sanctions on safe legal abortions, antipathy towards Black Lives Matter, and the present and terrifying rise of extreme right ideology. This type of activist work has only become more necessary as we witness a modern resurgence of white supremacy and Nazism.

The binding spells and hexes against Trump and his supporters challenge the traditional witches Rede — both to do no harm but also to avoid enacting magick that affects other people. Many activist witches believe that the magical work against Trump is a justifiable breach of the Rede: The Yerba Mala Collective explains that fascist ideology “rides a current” of malevolent intent and action, and to disrupt the current, witches must enact the opposite energetic response. Yerba Mala’s Tumblr page has some fascinating resources for activist witches, from a poetic manifesto (Concisely titled, “Our Vendetta: Witches vs. Fascists.”) to an antifascist spell book, to a colouring book featuring mantras that can mobilize antifascist energies and sentiment.

The recent mass hexings of Trump are great examples of how witch activism can be mobilized to effect political change. Singer Lana Del Rey has been public and vocal about her antipathy towards Trump, declaring her use of magick to combat the rise of alt right sentiment globally. Del Rey tweeted to her followers about dates for optimal binding spell deployment against Trump “At the stroke of midnight Feb 24, March 26, April 24, May 23. Ingredients can b found online.”

Witches and activism go together extraordinarily well, and there are parallels between antifa activistm and witch activism. (Thinking about nonviolent protest? What could be more appropriate than mass hexings of Trump?) Antifa refers to anti-fascist activists, loosely connected and associated, with a shared agenda of dismantling fascism. Antifa rhetoric endorses nonviolence, but makes exception for property crimes (which are seen as essentially anti-capitalist), and also endeavours to avert atrocities such as the holocaust or slavery. Antifa first mobilized in the 1930s against Nazi Germany, and are again active against the rise of white supremacy and anti-black and anti-Jewish sentiment and violence.

Antifa don’t believe in the police, and instead take matters into their own hands with demonstrations, political rallies, and direct actions. Again, although generally non-violent, they assume a “by any means necessary” approach in the face of right-wing extremism to dismantle oppressive forces.

There are parallels here to witch activists, who are willing to break the first rule of witchcraft, the Rede — usually a variation of “And harm none, do what ye will.” The binding spells performed on Trump are controversial among some witches, but are generally seen as being in service of the greater good for the greatest number of people. The antifascist spell book by Yerba Mala offers an edited version of the Wiccan Rede that reflects the moral relativism necessitated by the current threat of fascism: witches should “do what thou wilt” as long as it doesn’t harm anyone else — with the exception of fascists.

Related: “The Rede: Not all witches,” by Donyae Coles

We are living in strange times, leading people to participate in movements (like the current anti-fascist struggle) that they thought were long redundant. Citizens must remain engaged and vigilant against oppressive forces not only from the far-right, but also within their own communities. Spiritual communities tend to be uniquely comprised of people concerned with balance, spiritual wellness, ethics and equality. It’s logical that these communities create and foster activists, and also help sustain activists. Witch collectives and online communities can be wonderfully sustaining and validating for occult activists.

The spiritual work of the witch can be isolating. At the same time, spiritual work is personal, and allows people to engage meaningfully with political issues that might otherwise foster feelings of despair and helplessness. The ideology of witchcraft empowers the individual, not only to manifest their own will, but to believe that our collective will can change things in the world. These ideas are important in a time when it’s so easy for people to feel isolated and impotent against forces of evil.