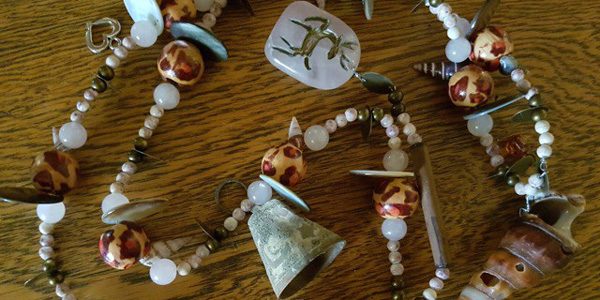 A witch’s ladder is a traditional talisman made by tying knots into a cord while speaking words of power. When used as an aid for meditation or prayer, it functions much like a string of mala beads in Hinduism or Buddhism, or a rosary in Catholicism. Making a witch’s ladder is also a form of spell casting, where the physical sensation of objects moving through the fingertips anchors the mind and grounds the charm.

Around 15 years ago I designed a ladder called the Girdle of Ishtar as a form of magical activism. I wanted to harness Ishtar’s passion and wisdom in order to overcome conflicts originating in the Middle East, her ancient home. I wanted to invoke Ishtar as a common ancestral deity, to awaken a desire for unity and healing among those suffering in the conflicts. My first Girdle of Ishtar was a practical way to frame distressing political events, deepen compassion for the human struggle, call up personal empowerment, and establish energetic protection. Unfortunately similar conflicts continue today, and petitioning Ishtar for guidance on matters of war and love remains as relevant as ever.

Ishtar was a powerful Akkadian goddess worshipped by the ancient Mesopotamians (including the Assyrians and Babylonians) from around 2000 BCE to 400 CE.1 Thousands of temples to her were erected in areas of the Middle East that are now lying within Iraq, Syria, Iran, Turkey, Jordan, Lebanon and Egypt.

Her worship predated Islam, Judaism and Christianity and was a forerunner of them all. Ishtar was a fierce fertility goddess whose symbols were the lion and the evening star, Venus. It was said she made war by day and made love by night.2

Ishtar shared her origins with Inanna in Sumer and Astarte in Phoenicia, and over time she absorbed the attributes of many lesser-known tribal deities of her region. Her mythos later influenced the rise of both Isis in Egypt and Aphrodite in Greece.3

At a time in history when constellations in the night sky would have appeared even brighter and more impressive than they are today, Ishtar was known as Queen of Heaven or Queen of the Night,4 wearing the sparkling wheel of the zodiac as her girdle.5 The circular girdle image probably symbolized Ishtar’s omnipotence, and was doubly evocative given her fame as a goddess of sexuality.

The Girdle of the Zodiac

So in Ishtar’s honour, incorporating the traditions of mala, rosary, and the witch’s ladder, I fashioned the Girdle of Ishtar as a circular beaded belt to be passed through the hands while speaking the following verse. The phrases are attuned to the energies of the 12  constellations and signs of the zodiac. After repeating each line aloud or silently, the fingers move on to the next bead.

Taurus: The apple of love is mine to share.

Gemini: I fly freely to my soul mates.

Cancer: I protect my kin in the shade of the moon.

Leo: I hunt my passion in the warmth of the sun.

Virgo: Body and breath are the rites of my temple.

Libra: I dance in the wind, in perfect balance.

Scorpio: I descend into darkness like a shooting star.

Sagittarius: I emerge shining, on a barge of wisdom.

Capricorn: Fauns in the corn carry my spirit.

Aquarius: Loving everyone, I cultivate paradise.

Pisces: My cup brims into the ocean.

The last line blends into the first in the same way that the sun progresses from the constellation of Pisces to Aries and back again, so that numerous repetitions of the verse and passes of the ladder are made in one sitting. The whole process produces a feeling of calmness and strength.

In karmic astrology the signs of the zodiac represent spiritual passage through stages of evolution and successive incarnations. Likewise, the use of Ishtar’s Girdle invites deep contemplation of the soul’s journey through this lifetime and beyond. Although the astrology of the ancient world observed fewer planets and took a different sequence, I have used the modern, familiar progression of signs. Of course, your ladder and your words may be different!

Remembering Ishtar’s historical metamorphosis into multiple goddess forms, you can also call on other deities if you wish. I recently made a blue-green Girdle of Ishtar for Isis and another in copper tones dedicated to Aphrodite (pictured), and I regularly invoke other deities I seek to work with at the time. 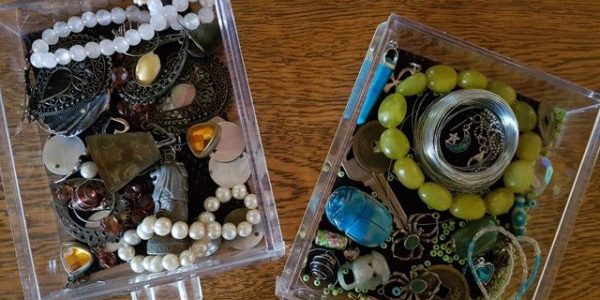 Below are suggested guidelines for enjoying the creation and use of your Girdle, but always follow your own inner promptings when making a magical piece. In Ishtar’s name, blessed be.

If you make a witch’s ladder of your own based on this tutorial, we’d love to see it if you’re willing to share your magick with us. Let us know in the comments what you come up with!