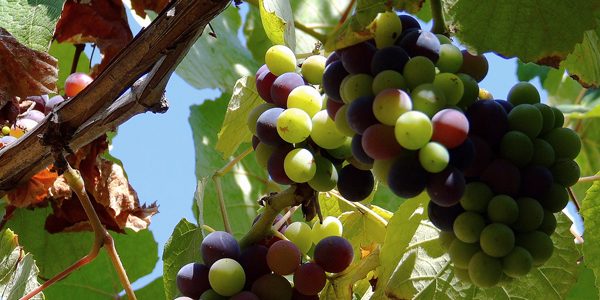 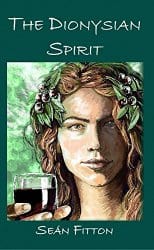 Sean Fitton’s first book, The Dionysian Spirit,  is divided into seven parts, detailing the progression of Dionysian worship through ancient times, until present day. The striking cover art by Janice Duke depicts a lithe and flower-crowned youth, wryly smiling and lifting a glass of wine, enticing you to read further. Indeed, I ended up drinking a few more glasses of wine than I anticipated while reading this book.

Inside the slim volume, you are met with a lovely devotional to Dionysus. Evocative and sweeping, I enjoyed this passage more than any other in the book — even if it gave the whole book away in the first two pages. Fitton’s style is, generally, easy to read and understand, especially for a first-time author.  Written for a Pagan audience, readers should glide easily into the visualization in the first few chapters. They provide historical context to the world in which Dionysus came to power. The rigid, male-centric culture of ancient Greek city-states demonstrates why Dionysian rites were so different from the mainstream practices of ancient Greek religion.

The most important difference in Dionysus’ practice seem to be the Otherness of the demographics involved.  While most of Greek culture was open only to free men of influence, Dionysus accepted all into his worship. Women, enslaved persons, the poor, and foreigners were welcome to drink of Dionysus’ cup.1 Fitton describes Dionysus as he was understood by the Greeks — effeminate, wild, and perhaps a little dangerous. As a deity gestated in a human mother, yet born from the thigh of his father, Zeus, Dionysus holds a strange and intermediary space in the Olympian pantheon. His grandmother, Rhea, taught him her rites, which he passed on to mortals, resulting in an altogether feminine and Titan form of worship.

When Zeus grants the demi-god Olympian status, Dionysus is simultaneously relegated to live among mortals and suffer with them. That is, as Fitton states, why Dionysus’ rites of intoxication and out-of-body experiences are considered to bridge humans to the divine.2 Dionysus serves as his own priest to his followers, and in turn his followers can access his divinity through his rites.  It is the two concepts of entheos and ekstasis that Dionysian ritual imparts to the practitioner. Respectively these translate to “bringing god into oneself” and “standing outside oneself,” reflected today in the words enthusiasm and ecstasy.3 Ecstatic dance, performance, mind-altering substances, and ascetic practices can all lead to altered states of consciousness; such Dionysian activities induce creativity, release, and an understanding of oneself and the world around you. This is what Dionysus offers: a freedom from the suffering of mortal life.

Fitton goes on to write that Dionysus’ rites are similar to West Sumatran and Chinese practices,4 but provides no citation for further research, introducing a worrisome trend that continues into later chapters. I found the chapters “Dionysian Heroes,” “Dionysus Around the World,” and “Dionysus through the Millennium” poorly structured and even confusing.  First off, separating the timeline of Dionysian heroes and modern Dionysians was discordant. Furthermore, failing to include certain historical figures — Shakespeare and Michelangelo, for example — left me stumped. The use of art or theatre to change the moods, attitudes and perceptions of whole societies strikes me as Dionysian on a grand scale. Instead, Fitton seems very interested in the Dionysian spirit that collapses in on its own grandeur, rather than the spirit that uplifts.

My biggest critique is of the chapter “Dionysos Around the World.”  Fitton admits that the practices he discusses technically have nothing to do with the Greek deity, but still goes onto describe Hindu deities, Chinese philosophies and religions of the African diaspora as Dionysian. In what reads as cultural appropriation, he lays attributes of a Greek god over these wholly unique and unrelated cultures. Most offensively, Fitton uses the phrase “Dark Continent” to describe Africa, while neglecting to discuss indigenous African spiritual traditions, but rather the religions of Vodun, and the African diaspora.  While the transatlantic slave trade is mentioned, Fitton neglects to discuss the British Empire’s colonization of Africa and its negative influence on traditional African spiritual practices. I would not have noticed if Fitton had not included any mention of these practices, and their inclusion did not add to my understanding of the Dionysian spirit. Instead, I was confused as to why they were relevant at all.

The biggest take-away from the book is the opposing forces of Apollo and Dionysus. Apolline worship is authoritarian, orderly and compartmentalizing, while Dionysus embodies the intuitive, sensual side of free-form expression. Much of the book is devoted to how the two must live in balance in individuals, as much as in society. This balance is necessary to sustain the creative forces in a practice, community, or individual, and results in fulfillment without inciting the burnout and self-destruction demonstrated by many of the Dionysian heroes Fitton discusses.  The Dionysian Spirit does not offer ritual or academic discourse. Rather it focuses on syncretic practices and theory, and even verges towards chaos magick once in while, citing Robert Anton Wilson and Discordianism.

It is clear that Fitton is passionately devoted to his patron deity, but in his final two chapters I detected a shift from easy reading to a fragmented style that included some confusing language describing non-binary individuals. It left me wondering if Fitton fully understands the spectrum he writes about, or if he is uncomfortable writing on such topics.  As with “Dionysos Around the World,” I wonder why this information is included. I accept that Dionysus embraces and can be embodied by gender variant people; however, Fitton’s examples did not show how this acceptance is uniquely Dionysian, rather than counter-cultural.

Sean Fitton’s opening devotional remains inspiring, leading me to suspect that the Apolline nature of writing, editing, and fact checking got the better of him in The Dionysian Spirit. If Fitton releases a book or audio collection of devotional poetry and song to Dionysus, I would probably enjoy that much more.