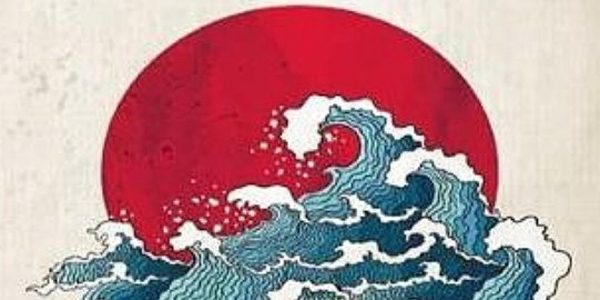 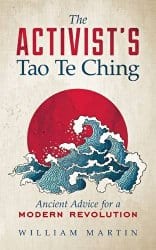 The Tao Te Ching is a small wisdom text, written more than 2,500 years ago by Lao Tzu. It is comprised of 81 very short poems, usually ambiguous when translated and tending to offer things that seem, at first, to make no sense, and take a bit of sitting with. It connected to the Taoist tradition which predates Confucianism in China, and is considered to be a classic Chinese text. Although its date of origin is debatable, there’s reason to think (as William Martin does, and talks about in his introduction) that it comes out of a period of consolidation of power into the hands of the few. It’s easy to see why the author finds this is so relevant for a modern audience. There are many versions of the Tao Te Ching out there, and William Martin’s Activist’s Tao Te Ching is an interesting and, I think, really valuable addition to the writings inspired by Lao Tzu.

Martin’s is the third version of The Tao Te Ching I’ve read, so it’s from a perspective of familiarity with several other versions that I approach this one. It’s worth pausing briefly to talk about translation and interpretation around this text. The first translation I read used really patriarchal language — it was focused mostly on what the prince, the king and the sage get up to, and seemed to have a politics I didn’t like, but also in that version I noticed a huge tension between some of the ideas and the feudal language being deployed. Then I read Ursula Le Guinn’s poetic re-interpretation, which uses inclusive language, and creates a Tao Te Ching that anyone can interact with. All of a sudden the gentle, subversive elements appeared to me in whole new ways.

When an author translates a book, they are making choices about words and subtext — there are seldom direct correlations between languages (king, ruler, and leader might all be used to translate the same term, for example); thus, the beliefs, values and agenda of a translator will inevitably impact a text. Early English translations of The Tao Te Ching inevitably have patriarchal overtones to a modern reader, because that was the world view of the people translating it. However, this does not have to be a handbook for guiding princes — it can be read, and I think reads more effectively — as a guide for the ordinary person (male or female) who wants to live their own ordinary, yet extraordinary, life. In his introduction, William Martin points out that Taoism is about working with a gentle flow, not dominating others, which makes patriarchal interpretations more than a bit suspect.

In terms of translation, one of the interesting things William Martin has done, is to translate the Tao into really modern language. He’s done this by translating concepts, so where one version may talk about the distractions of the world, William will talk about media, television, and shopping. This is a deliberate translation into a modern language of anti-capitalism, and anti-consumerism. It works really well, and from what I know of Taoism (I am no expert, but I’ve read a bit!) his emphasis on simplicity, on being rather than doing, and going with the deeper flows rather than the surface babble, is very much in line with Taoist thinking.

The Activist’s Tao Te Ching reads beautifully. The author has managed to catch something of the cadence of the text from other versions and it felt familiar, even though I was encountering a very different take on the original. I found the philosophy expressed in the book to be glorious — an uplifting, inspiring sort of read. If you see yourself as a quiet revolutionary, as someone who wants to gently throw off the shackles of oppression and compassionately live in a kinder way, this book is for you. It’s clearly written to help gentle activists keep going, and not be ground down by the misery and injustice that surrounds us.

What inspired me, specifically, was the affirmation of values I already hold. That may sound odd, but bear with me. We live in a human thought-bubble that is all about wealth, status, possessions, consumption and so forth. To be green, seeking sustainable, peaceful ways of living is to be swimming against the current right now. It can be lonely. The scale of what we’re up against to make human life sustainable can be overwhelming. William Martin has faith that by quietly doing what needs to be done, we can move our culture towards something kinder and more functional. That reminder is a valuable one, and I will turn to this book when politics gets me down.

There are passages and lines that I recognized as being very similar to other versions, while other poems are radically different. I can generally see what aspects of the original he’s been inspired by. So on different pages this book varies between being a translation and being a reinterpretation. One of the things the author has done is to deliberately reduce the ambiguity. This means some of his poems are longer than in other versions as he does more to explain whatever he’s talking about, and the language is more direct. On the plus side, this means the book is accessible and readable. If however, you like more ambiguous writing and more room to feel about for your own meanings, you might not enjoy this version quite so much.

To give you a flavour, here’s a fairly standard translation of the opening to poem 3, as translated by A. S. Kline:1

Don’t give honours to the worthy,
Protect people from ambition.
Don’t value scarce things,
Protect the people from envy.
Don’t show what’s desired,
Keep people from temptation.
So, in governing, the wise
Empty the mind

In William Martin’s version, the same poem opens as follows:

When a nation values wealth
Its citizens are easily controlled
By their desires and their fears.
When we learn to value simple things
And are not enticed by power
We can open the hearts of the people
To the joy of ordinary life.

It’s discernibly working with the same ideas, but saying them in very different ways, and to radically different effect.

If your primary interest is in exploring the Tao Te Ching, I wouldn’t necessarily suggest starting here, but I would suggest getting a copy. It’s a really interesting take that will help inform your view of other versions. If your primary interest is in activism and quiet, compassionate revolution, The Activist’s Tao Te Ching: Ancient Advice for a Modern Revolution is a book that will help you hold heart and mind together as you walk what is often a challenging path. I thought it was both beautiful and inspiring, and I can recommend it wholeheartedly.