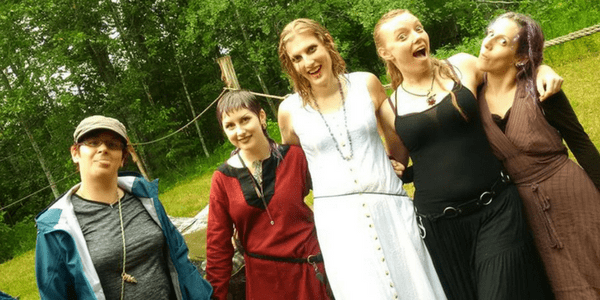 I didn’t mean to start an international movement against sexism in my religious community. I didn’t mean to stir the pot that deep. But, I did and I’m happy about it. I am one of the witches that the Havamal warns you about.

So, what is the Havamal?

“The Havamal” is a 165 stanza poem that was written down in the late 1200s as part of the Codex Regius, an Icelandic text of Old Norse poems. More commonly the Havamal is considered as part of the Poetic Edda, and although far from only text quoted in Heathenry it is certainly the most common. Not surprisingly, material from that period is laced with sexism, having been written mostly by literate classes who often were Christian monks. We can both thank these monks for writing down these poems and stories, but also be wary of them, as well as be wary of the sexism inherent in the time period in which they were writing.

Within the Havamal itself, it warns you about witches,and that:

83. The speech of a maiden should no man trust

nor the words which a woman says;

for their hearts were shaped on a whirling wheel

and falsehood fixed in their breasts.1

Yet, #HavamalWitches is actually not about witches or the Havamal, it is about sexism in the contemporary Heathen community. 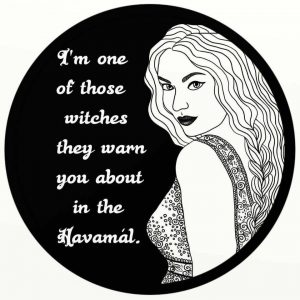 Many people refer to Heathens as having “the religion of the Vikings,” and think that we wear horned helmets, get in fights, are really macho, and drink lots of mead. Although, the last one is somewhat true for many of us, that stereotype of Heathens does far from capture the rich and diverse ways that Heathens express our religion, folkway, worldview, or spirituality. This can include deep ancestor veneration, honouring of landvaettir, building of community, adherence to virtues, and of course also dedication to deities of the Germanic and Norse peoples. These are the reasons I’m a Heathen and a Gythia.

The Heathen community beyond quoting from old texts and that stereotype has a bigger problem that goes through both: sexism. But, we have a solution the #HavamalWitches.

When I created the #HavamalWitches it was mostly based on a joke. My friend Gythia Brynja Eirdis Chleirich had made a Facebook post about the statistics of men speaking over women, and her post cited the research of Dr. Dale Spender, a well-known Australian researcher. My friend commented on the data, reflecting that it represented how Brynja felt within the heathen community. I got a bit worked up, as increasingly I was seeing how women were being pushed out of Heathen communities and pushed down within them. As a result of Brynja’s post and some private conversations, I made a post that stated: “When Heathen women and femmes are pissed, you best get out of our way or join our shieldwall. #ValkyriesComing #HavamalWitches,” referencing a meme on the Internet of “I am the witch the Havamal warns you about,” and with plenty of Lagertha GIFs to round out the comment thread underneath. That night Brynja created a cover photo with the #HavamalWitches in it, and it was then that I knew we were on to something. 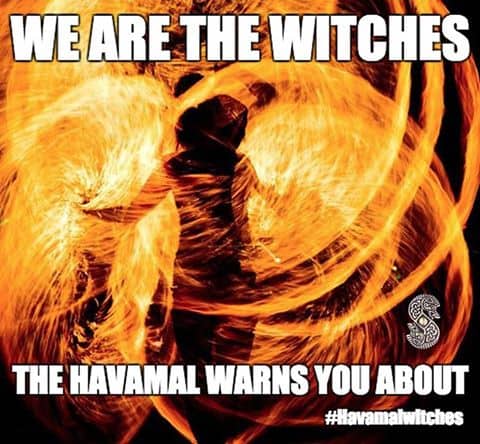 I had been busy packing and getting ready for Hail and Horn Gathering, the largest Heathen gathering in Canada, held at Raven’s Knoll in Eganville, Ontario, but I decided to start making posts. At first, it was somewhat an innocent piece to provoke discussion within my own local Heathen community, so I made a few posts based on real issues I had seen in the community:

When women are talked about as valkyries, but it is really just an objectified sex joke #HavamalWitches

When Goddesses are dismissed as less important deities to honour #HavamalWitches

The ripples had started before I knew it. Brynja started to make posts, then another friend, and another, and another. Within a few hours I found over a dozen women making posts from my local community, but also women who I had on my friends list from other places started to post. Heather O’Brien, founder of the Heathen Underground, talked about the sexism she experienced as the founder of a Heathen website. Men I knew started to share our posts, many shocked, others in solidarity, and some because they saw themselves and wanted to do better. The moment I knew that this was bigger than us truly though, was the first post I saw that was made public by someone not on my friend’s list:

“When they claim “shame culture” in order to maintain ambient and directly abusive environments in order to silence different voices. #Havamalwitches,” by Dominique Smith

I knew something was brewing, but my focus as always is actually on my local community. I was responsible for the main blót at Hail and Horn Gathering with my fellow women of Vindisir Kindred, in particular Gythia Jessica Kelly and Gythia Luna Story. As a result, I closed my laptop, got in our Kindred van that four of us, a baby, and a really well behaved German shepherd and turned off my phone. 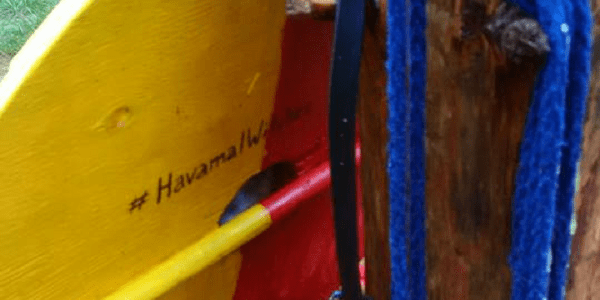 From local discussion to international movement

As the weekend went on I focused on the blót to Heimdall and Syn, and the later esoteric rite that was being done by White Dog Hearth that I had a role in. Fellow Gythia Luna Story painted #HavamalWitches on the back of the shield we were offering to Syn, but for the most part, my focus on the community around and seeing old friends and meeting new ones from Kindreds, Hearths, Groves, and groups from across Canada and a few from the US.

Yet, people started to come up to me saying things like “You really started something eh?” and “You even pissed off the AFA! Good job.” People then started to bring me their phones ,and what I saw amazed me. People from all over the world participating in the discussion. People relating to their own experiences in their local community, what they’ve experienced online, statements of solidarity and support, as well as of course the backlash.

I found women posting from across Canada, the US, Italy, Norway, Sweden, Denmark, New Zealand, and more. Conversations were raging in Facebook groups of some of the largest Heathen organizations in the world, and some of those conversations still continue. #HavamalWitches is now something that is owned by all of us who have felt the sting of sexism and misogyny in Heathen communities from experiences of objectification, to consistent dismal of our knowledge, to being talked over, to even experiences of violence where the community will side with the abuser.

As a result, I asked what some women about why #HavamalWitches was important to them, and this is what they said:

#HavamalWitches is important, because it’s bringing to light a problem.  We as a community need to look at where we are and where we’re going, and we can’t do that if we devalue the experiences of half our members.

#havamalwitches Because you are tired of being told that you can’t lead a kindred as a female. You have spent years studying and practicing, and have more knowledge than most men, but get dismissed since your “woman folk,” so you can’t know what you’re talking about. You should just stay out of “man business” anyway. 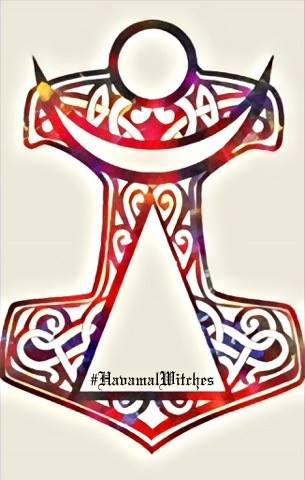 Here is the issue. I will worry about both of my children for my entire life and probably into the next, but I’ll worry about different things because of their gender. My boy walks home a 3 am, and I worry that he will be mugged; my girl walks anywhere at anytime on her own, and I worry about sexual violence and harassment. I worry about how she will feel the first time some dirty old man leers at her. I know how I felt… I felt sick. I felt like there was something wrong with me, like I needed to make myself small to hide and protect myself. I don’t want that for her, or any of the women in my life. I want to wrap my arms around all women and protect them, but I can’t, so I will do my best to instill worth. You matter. I love you. Don’t make yourself small, like I did. xoxo #havamalwitches

It is my highest hope that women will have an equal voice in all matters of pursuit and dialogue within Heathenry. It is a gift to be standing beside the #HavamalWitches, as many of them too are paving ways and holding space for what is real and important. These are Heathen women; may their voices continue to be heard.

It warms my heart also to hear though, that not all Heathen women have experienced these forms of sexism in our communities. Sunniva Elvastad, from Norwegian Asatrufellowship Bifrost, the largest Heathen organization in Norway that has been government recognized since 1996, said:

I was saddened and surprised to read the #HavamalWitches stories. I did not recognise the experiences told my foreign Heathen sisters. I am used to being treated as an equal and with respect amongst Norwegian Heathens. The only disrespect I have experienced as a Heathen woman has happened online, from people abroad. In Bifrost, both the membership and leading position ration is pretty much 50/50 female/male. I think awareness is very important, for us it is important to show solidarity. My #HavamalWitches’ tale is that sexism is not intrinsically Heathen. Sexism is simply not compatible with Asatru. 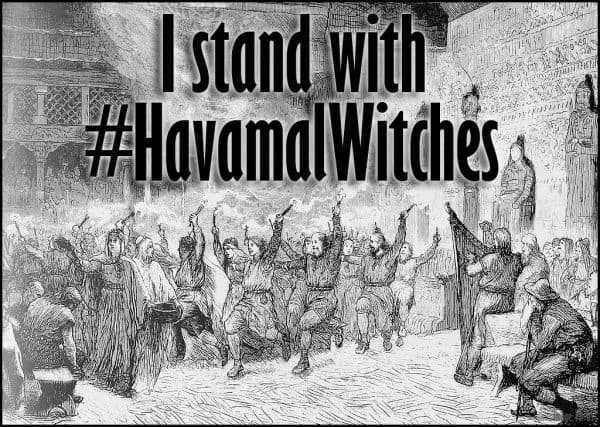 Sexism, although not intrinsically Heathen, is something that Heathen women have to survive within many of our communities. Recently Gythia Brynja Eirdis Chleirich, who helped found #HavamalWitches, was the survivor of a violent attack and attempted murder. This came from a man who catcalled her on the street who she previously didn’t know. He was not a Heathen, but is emblematic of the violence that women have to contend with. I think her voice in this story is important.

When I asked Brynja why #HavamalWitches was important to her, she said:

To me, #HavamalWitches is so very much more than a “look at me” opportunity. No, it is an opportunity for the men with whom I share ritual space, feast and frivolity to see what and how their behaviours have impacted me within my own Heathen journey. It is an incredible opportunity for these brethren to be afforded the time to process, adapt and modify their perspectives towards the women with whom they have previously considered “equals” but have not been able to effect said beliefs through actions and deeds. This will ultimately carry forward to our next generation of sons and daughters and their future Heathen communities and experiences.

In solidarity with what she went through many have changed their profile photos with the image of a purple dragon and with the hashtag #StrongLikeBrynja. When it comes down to being a Havamal Witch, or being a woman survivor, it is less about strength, and more about perseverance and the beauty that comes from when we find our ways to survive both within the Heathen community and outside of it.

Kvasir, Odin, and the Mead of Poetry