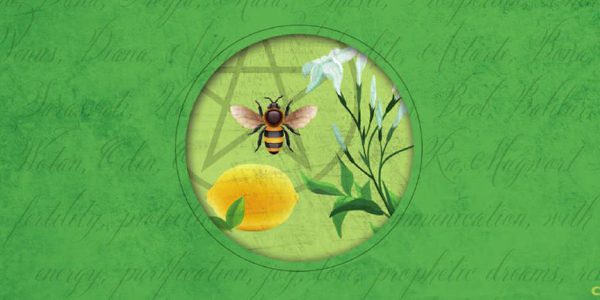 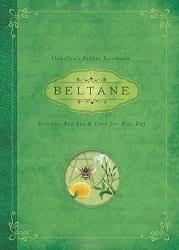 Beltane: Rituals, Recipes & Lore for May Day by Melanie Marquis is the second in the popular Sabbat Essentials series, consisting of the standard handy sections of: Old Ways, New Ways, Spells and Divination, Recipes and Crafts, Prayers and Invocations, Rituals of Celebration, and Correspondences for Beltane. As with the other books in the series, Beltane is a quick and informative read, as well as a useful guide to be referred to over and over again.

After winter’s thaw, and the beginning of blossoms and buds, the arrival of bees, and return of spring song birds following Ostara, the Wheel of the Year turns to the (unofficial) start of the summer season — Beltane. Beltane brings to mind fire, festivities, and a bit of frivolity. In agricultural societies, the holiday marks the start of summer.1

As a cross-quarter day in between Ostara and Midsummer, Beltane signals a time for growth, abundance, fertility, and carefully tending to those seeds of dreams, goals, and visions planted at Imbolc. Just as the days grow longer, so too does the sun’s strength grow in intensity. Activity bursts all around us: flowers flash their colourful blooms, birds sing, and animals scurry to life, happy that the chill of winter is a memory. As we speed towards the longest day of the year at Litha, Beltane festivities, which run from sundown on 30 April to sundown on 1 May, are the time in which to concentrate on, connect with, and celebrate strength, protection, and growth.

Melanie Marquis writes, “Beltane… has its roots in the ancient Roman festival of Floralia as well as in the early pre-Christian Celtic festival of Beltaine and other European May Day celebrations.”2 Exploring the roots of any holiday, and its connection to other similar holidays, is fascinating, as it provides a foundation on which to expand one’s understanding of a celebration. Beltane is no exception.

Both Celtic names for Beltane — Bealtaine (Irish) and Bealltainn in Scottish Gaelic — stem from a common Celtic word that means “bright fire,”3 with the festival of Beltane connected to the worship of Celtic god Belenus.4 Known by many names, Belenus is “closely related to the Roman Apollo, a god of light and the sun,”5 and was “associated with fountains, health, and the pastoral lifestyle.”6 Druids, too, celebrated Beltane with fire, according to an early medieval text where a description of a fire ritual performed by the Druids details incantations made, two bonfires built, and cattle forced to run between the two.

As with other holidays, fires within the home were extinguished, and then relit from the community’s bonfires. Marquis details the sacredness of both the fire and the gathering of the wood for the fire in old-world Celtic traditions, as well as their magical properties.7

In addition to fire, water was also thought to hold supernatural properties as well, especially dew collected on May Day morning, and the waters deep within sacred wells.8 It’s fitting that at Beltane, a time of union, the two opposing elements of fire and water are together held up as sacred partners.

Flowers are used as decorations within and outside of homes, especially across thresholds, and on animals, and to decorate one’s self. They also played a huge role in Beltane celebrations, and were used for beauty and as magical protection.9 The use of flowers in Celtic Beltane and May Day celebrations reaches back to ancient Rome, as they celebrated the annual festival of Floralia in honour of the goddess Flora.10 As the goddess of fertility, vegetation, flowers, and growth, Flora was honoured annually after an especially bad time of drought. Flora’s Greek counterpart, Chloris, was honoured in the same way to secure favour of the goddess with the growth of vegetation and fertility of the animals. Yellow flowers, especially, were used to represent both the sun and fire. This magical protection directly related to warding off any pranks, mischief, or misdeeds by the sidhe.

Old May Day customs featured flowers, greenery, fertility, and sex. The old custom of crafting a May doll and dressing it in fresh flowers was popular. One custom that sounds wonderful is the May Bush.11 Decorated with ribbons, flowers, and other ornamental items, individual households sported their own May Bush, while communities also had a public one on display. A tradition that seems to not be carried anymore, I must confess it intrigues me so much that I’ll be decorating a bush outside my door.

Another custom that seems to have died out is the May basket, where children “left baskets of flowers, candies, or other goodies on the doorsteps of their friends and neighbors as a token of friendship and goodwill.”12 As with the May Bush, this is a custom that resonates with me, and one I’ll be resurrecting in my own celebration. It seems like a fun way for me to let my friends know I treasure them.

Of course, there’s the Maypole, which is closely related to the May Bush.13 Usually placed in the centre of town, it is decorated with flowers, greens, ribbons — particularly during the Victorian period. As a symbol of the fertile energies of the season, Maypole dancing and festivities became raucous as well as competitive.

A fascinating tradition which Marquis delves into is the Morris dancing and mummers.14 Focusing on themes of fertility, death, transformation, and resurrection, the magical properties of the performances were thought “to bring good luck to the community.”  Featured roles within these dances and performances included hobbyhorses (for peace and luck), the Fool, Robin Hood (as a Green Man figure), Maid Marian (as a May Queen figure), and a raucous Jack in the Green.

Today, sacred and secular blend together to create a new way in which to celebrate modern Beltane. While old traditions still hold a place at Beltane, our more urban settings and lives give rise to adaptations on old traditions. For example, candles and fireplaces step in for bonfires, and gathering of flowers requires no more than a trip to the florist. Because of the new way of life, many contemporary Beltane rituals focus on “more personal goals, such as self-improvement, creative fertility, purification, and romance.”15

Different Pagan paths and practices for Beltane are touched upon: Celtic Reconstructionist, Wicca, Heathenry, contemporary Druidry, traditional witchcraft, among others. I loved the listings and descriptions of modern Beltane festivals and gatherings around the world: from the Beltane Fire Festival in Edinburgh to the May Day Faerie Festival at Spoutwood Farm outside of Glen Rock, Pennsylvania.16 Modern celebrations in the secular vein across the globe are touched upon17 from the UK and Ireland to Finland and Estonia.

Spells and divination at Beltane are part of the holiday — especially those with a focus on love and romance, growth and creativity, and protection. Marquis provides instructions for a beautiful Two as One Candle Spell for Love, as well as a Fast-acting Loving Herbs Spell. My favourites were the Sun and Citrine Spell for Energy and Purification,18 which connects you with the earth, with your face to the sun. As with the idea of clearing, this spell clears out the old, negativity, and stagnation in your body. Utilizing salt, citrine, and sun the spell revitalizes what was stuck within you. My other favourite was the Beltane Bean-Planting Spell for Manifestation and Abundance.19 In the way of divination, Marquis provides a traditional Beltane custom utilizing daisies or dandelions20, as well as a detailed Love Match Tarot divination.21

Like Beltane itself, I loved the rising energy of this book. By the time the Recipes and Crafts section is reached, the holiday spirit is strong. Because food and crafting does that — they’re an outward manifestation of our inner selves and spirit. The recipes are simple and easy: Blessed Lemon Custard (yum), Abundance Berries with Cream (easy to produce in a pinch!), and the easiest of all: Honey Wishing Yogurt. The recipes continue with main courses, drinks, and more desserts. A person can plan and pull off an entire gastronomic affair for Beltane just by following these pages.

Crafts and decorations are as important as the food. From crafting a priapic wand22 to designing a Beltane floral crown23 to constructing your own Maypole — full sized24 or tabletop25 to decorating your home and yard with flowers, ribbons, and trinkets. Beltane is a time of high-octane celebration.

Beltane: Rituals, Recipes & Lore for May Day is a perfect guide to ignite the spark of creativity, of growth, of love and of promise. At the heart of Beltane is growth and fire. Can’t you feel the life — the fire — of the world and the sacredness rushing through your body? I can. After months of stasis and seeding plans, it’s as if my body and psyche are revved to jump-start all the new ideas I’ve planted and cultivated for months. Those flickering flames at Imbolc and Ostara transforms into a roaring bonfire at Beltane.

Beltane blast: Rituals and activities for the first of May

Oracles of Apollo, by John Opsopaus