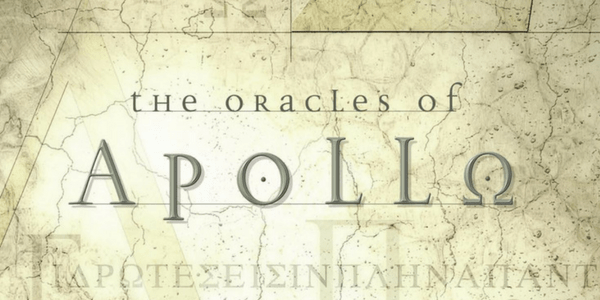 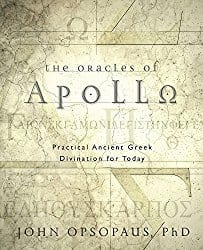 It seemed fit to use a method of divination described in The Oracles of Apollo: Practical Ancient Greek Divination for Today by John Opsopaus to highlight what would be best to convey in the writing of this review. The answer was “106. Become Sensible,” which advises that one “come into a new state of being, be born.” What was brought forth in read this book for me that has shifted how I have thought about divination to a new awareness?

Well to start, Opsopaus has laid a foundation that provides a thorough understanding of how the methods of divination in Ancient Greece could be practically used today. I appreciated the way in which Opsopaus was able to portray how these oracles and divination were relevant in the context of the ancient Greek culture, through mythology, and extensive background information on the historical evidence for the use of oracles and divination.

Secondly, because of the use of the methods described among the general public classically, there was a certain simplistic nature to the divination methods that allows for them to be easily recreated. Most of the methods of divination require only the use of household objects such as beads, stones, dice, or coins in order to connect with the wisdom of divine ancient Greek oracles as provided. For the divinations that require more specific material, like the lower spinal bones of cattle, substitutions are provided that can easily replicate the similar textual feeling of bones that were used in a similar manner to rolling dice. These methods do not require any extensive foreknowledge or training, merely the desire to consult the powers for guidance.

Because of the minimalistic requirements of these forms of everyday divination, I was able to test out the various methods many times through the course of reading the book. Asking questions such as how my date would go, what should I do in this situation with a friend and, most often, what advice do you have for me right now, were all answered with easily understood maxims that Opsopaus has translated for the reader to make them quite accessible. I have to say, the practical wisdom of the ancient Greeks still holds sway, and I benefited from my consultation of the oracle. My personal favourite was when I decided to use Kledones, a divination method that involves going to a public place and having the first chance utterance you hear be the guidance you seek, to find out some more about my love life. I went to a very crowded place and after stating my intention the first phrase I heard was, “Oh it smells good!” which I took to be rather fortuitous.

The Greek method of correspondence between letters, numbers, gods, goddesses, and planets was new to me. The intricacies of the oracle systems used can be complex, and Opsopaus has made them easily understandable by offering fantastic visual representations of the material in chart form that helped me practice and study the meanings and relationship between divination symbols. I enjoy the open-endedness within the ancient Greek system that doesn’t lock the divinations in stone simply because you received that result. There were ways to nudge the outcome predicted to happen, and also to avoid unfavourable outcomes foretold through the use of talismans. Opsopaus provides a talisman in the form of a god or goddess, and corresponding symbol for the alphabet oracle to be worked with in regard to bolstering or negating the outcome of the divination. In this way, the oracles feel very much alive and sentient, because I still feel I can access the same stream of wisdom, knowledge, and power the ancient Greeks sought.

The book is divided into three sections. The first section is an overview of ancient Greek divination. Opsopaus describes mythological origins of divination, and then goes into various methods used during the time period of ancient Greece. Described are scrying, Pythagorean numerology, and pendulum divination. The focus of the book is on cleromancy or divination by casting lots, to which Opsopaus devotes an entire section. He  offers a fascinating overall history of consulting oracles that draws on Neoplatonist views in shaping the understanding of divination as seen in this text:

Divination is akin to magic. Or, to put it in Neoplatonic terms, divination is a part of theurgy, the arts by which we come into contact with the gods and consciously realize the destiny of the world and ourselves. Through divination the gods reveal potencies and potentialities (Grk., dynamis; Lat., potentia) in which we may participate. The process of actualizing these powers, this destiny, of manifesting their energies as actuality (Grk., energeia; Lat., actus), begins with interpretation of the oracle or omen. Prior to interpretation, the meaning of the oracle is open, though constrained by the signs.1

To end this section, Opsopaus has provided ritual techniques to help improve divination results. Included are rituals for consecration of tools, and formal and informal divination. The rituals involve libations and calling to Apollo, the Lord of Oracles. A divination journal is included, as we as Opsopaus’s thoughts on repeating divinations.

The second section is dedicated entirely to the alphabet oracle, previously referred to as the Lymerian alphabet oracle. Opsopaus delves into the history behind the alphabet oracle, and how it evolved over time. The basic premise is that the letters of the Greek alphabet correspond to numbers, to which lots can be cast in order to divine a number, corresponding to a letter, which has its own oracle message. The correspondences differ depending on which historical text is used. Opsopaus has neatly laid out the material, and provided options for how it is to be interpreted. He lists numerous methods of casting lots for divination. The correspondences between the numbers, letters of the alphabet, planets, and oracle messages is very intricately explained, and sheds light into how some of the greatest mind of ancient Greek understood the relationship as it related to divination. For each letter of the Greek alphabet, Opsopaus provides a translation of the oracle, key phrases for memorization, an interpretation of meaning, numerical value, Olympian god or goddess, zodiac correspondence, part of the body association, Agrippa’s correspondence, lunar symbol, associated hieroglyph, hour of the day, and vox magica for ritual use. The reader can use the book immediately to begin to discern the messages of their divination.

The third section is dedicated to the Oracle of the Seven Sages. The text of the Oracle of the Seven Sages was displayed on an epithet at the Temple of Apollo at Delphi. It is 147 short sayings whose brevity and ambiguity often prompt reflection and meditation on the meaning. Once again, various methods of divination are provided from dominos to pebbles to accuraly seek the guidance of the oracle. Opsopaus then provides both the Greek and Latin for the message, in addition to the brief message of the oracle and a longer interpretation of its meaning. He adds in bits of cultural history to elucidate the meaning of the messages as they may have been related to the culture of the time.

Opsopaus takes an academic approach, and all of the material presented is well researched and sourced. His extensive knowledge is quite evident, yet the way it is written makes the subject approachable. Opsopaus has skillfully interwoven the mystic nature of these methods and its cultural symbolism to show how the wise and sensible nature of these divination methods can succeed in being effective in everyday life, while at the same time locating their use in ancient Greece’s history as represented by  historians, myths, and texts such as Homer’s Iliad and Odyssey.

Overall, The Oracles of Apollo: Practical Ancient Greek Divination for Today sheds light on ancient Greek methods of divination, and teaches the reader how they remain practical and useful. I highly recommend this book for anyone who is interested in divination, oracles, and history, particularly as related to ancient Greece. The insight from Opsopaus background as both a historian and magician lends itself to a highly fascinating read.