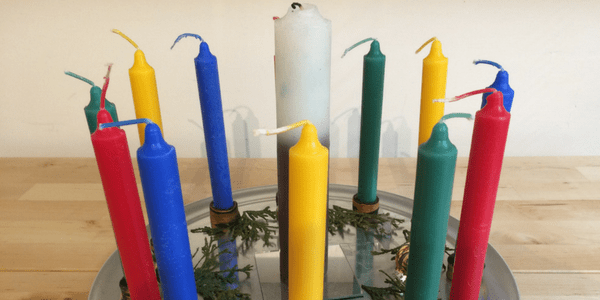 While Midwinter and the Yule season are about connecting and celebrating with others, I also try to make some space for myself amidst all of the bustle and cheer. It’s not that I don’t love the warmth, the food and drink, or the laughter, it’s that as the wheel of the year drops to its lowest point before the light begins to return, I find it useful to use the holiday break to take inventory while I can. As the calendar year comes to a close many of us find ourselves transitioning into next stages in our work, personal, and magical lives.

I designed this astrological candle working to meet two needs: first, most importantly, to add to the mass of holidays decorations in my tiny apartment, and second, to perform a magical working to prepare me for the new year. This is what you might call a working for the self, but is not meant to drive me (or you) up the wall with self-improvement jitters. The goal is to anchor to something structured and nurturing during the holiday season — allowing space and take stock and reflect, and following the initial working, keep up the great work, and do some planning for the year ahead.

Working with the zodiac is just one lens of many that you can apply to your magical work, and ultimately, this working is the culmination of my year spent studying astrology for the first time, and attempting to slowly find more time for creative ritual in my life.

The Winter Solstice and the return of the sun

In the northern hemisphere, the light returns to us on December 21st at the Winter Solstice. While the mythology tied to this solar event varies depending upon what tradition and point in time you find yourself in, the general idea is that after the darker part of the year that followed the Summer Solstice, we have now reached the darkest night of the year (the Winter Solstice), and are now at the point where the Sun is beginning to find it’s return, often celebrated through festivals of light. In some mythologies, the return of the light is symbolized through the birth of sun deities at the time of the Winter Solstice. For example, in the Egyptian Pantheon Isis births Horus, and in the Greek pantheon, Apollo, twin brother of the moon goddess Artemis.1

For some Wiccans celebrating Yule, we see a similar myth as the Oak King — the rebirth aspect of the God — conquers over the Holly King, the death aspect of the God.2 And then there is of course the reason for the season — the Christian myth of the divine child. Does all that twinkling tinsel trim and gold ribbon make sense now?

The tradition of lighting candles (or fires, or Yule logs, or strings of twinkling bulbs on plastic trees) comes from the fact of the light’s return at this time of year. We symbolize and celebrate this through ritual burnings, party lights, and dropping disco balls at midnight. The whole season is about celebrating this glimmering light; so any sort of ritual involving candle burning seems to make sense. 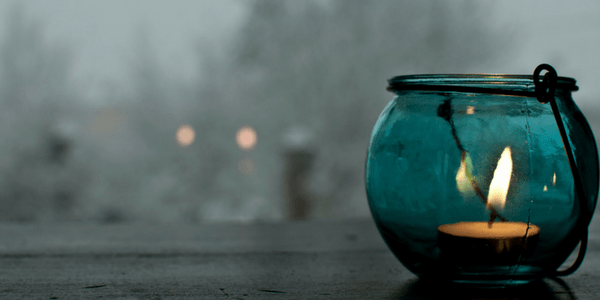 The Wheel of Fate

In Norse mythology,  the solstice is known as the Mother Night, because within the darkness Freya “laboured to bring the light once more,” spinning the fates at her spinning wheel. The world Yule itself is derived from the Norse word Jul, which means “wheel,” referring to Freya’s spinning wheel of fates, the cycle of the seasons, and the continuous nature of life.3 I think that no matter what tradition you’re working in, in some ways, we all can’t help but reflect on the cycles of our lives at this time of year. The calendars are turning over, and for many the winter solstice acts as an opportunity for many to take stock of things, letting go of some, and moving forward with others.

While we can view the lessons of Midwinter as tied to the greater Wheel of the Year, I think that an astrological lens can also be helpful, and one way of interpreting the Wheel of Fate is through the signs of the zodiac. Admittedly,  the common Christmas carol, “The 12 Days of Christmas,” and its ties to different 12 night celebrations had been floating in my mind as I began to design this working. I had seen the pattern before: the 12 signs of the zodiac, the 12 months of the year, the 12 apostles… this was a number of significance.

After some research, I learned that in many traditions, a period of holy days (sometimes 12, sometimes not) around the Winter Solstice are observed, often thought of as days “out of ordinary time.” For example, the Rosicrucian author Corinne Heline notes that the 12 day period after the solstice — between the 26th of December and the 6th of January (the Epiphany) — is “a period of great esoteric significance,” and “the ‘spiritual heart’ of the year that will follow,” and understands these days as tied to the zodiacal hierarchies.  In numerology, 12 is associated with the end of a cycle of experience, and the potential to move towards a higher consciousness because of it.4 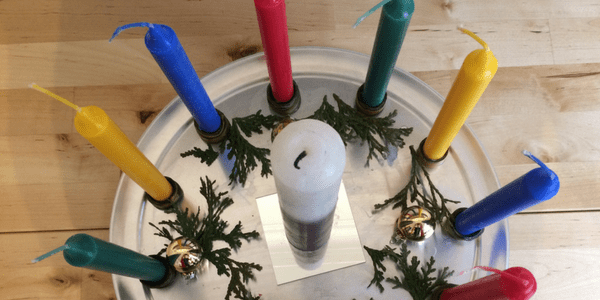 I started to wonder how I might take this pattern I was beginning to engage more deeply with — the number 12, the astrological wheel and their significance — and apply it over the holidays in a working. I didn’t want this to be a working for a particular tradition or holiday (though it definitely can be applied that way), but rather a 12 day or more suggested approach that you can work whenever you find the time and space over the holidays.

I began to count the days:

If I lit a candle on Dec. 21st to signify the solstice, the following day (the 22nd) would be day 1, and then I’d light 12 candles until January 2nd (Day 12). I decided that the first 12 days would be spent working with the energies of each zodiacal sign, through meditation, observation, and reflecting on my previous year from one astrological period to the next. I’d then do something forward thinking on the 12 days following this period, starting as soon as I recovered from the holiday rush on the 3rd (Day 13). These days also just happened to be days that allowed to to set time aside in my schedule and do the working effectively. Sometimes convenience is a magician’s friend, other times, not so much. So, on the first day (for me, the day after the Winter Solstice,) the focus will be Aries, the second is Taurus, the third is Gemini and so on.

During the evenings of days one to twelve, I will do the following:

On day 13, the cycle restarts and I will look forward, reflecting a bit again on what I’ve learned about this cyclical pattern, and perhaps doing some associated yearly planning in terms of budgeting, work project, personal goals, et cetera.

Preparing the candles for the working

As mentioned, as much as this was spiritual work, it was also a chance to let my holiday craft and decorating skills shine. I thought it would be effective to have all of the candles together for the working, lighting them in sequence in a circle like the astrological wheel, building the intensity of the glowing candles as I worked my way through it. In order to do this, I made these candle holders using Sculpey clay,6 choosing black glitter and gold clay (inspired by the tacky decorations of my childhood), and spiralled them together into a marbled pattern before rolling them out and wrapping them into taper holders. Really, you can use this technique to build a simple holder for a taper style candle of any size.

Looking back, I would have liked to have used smaller candles, but I am a go big or go home type, especially when it comes to holiday decorating. If you have access to one, you can also just use any candle holders you might have (I’m very jealous if you have a 13 pronged candelabra!), and the circle, while nice, is not totally necessary.

I used a simple silver pizza pan to arrange my candles in the round, because the lip on the edge is great for catching spills. I added trimmings from my cedar tree in the front of my house to symbolize the eternal life of the perpetually re-born solar deity, as well as for its purifying qualities. I also added a few golden bulbs, ’cause I love glitter, and to symbolize the solar power I am working with. Arrange your candles in whatever way you like and that is most convenient for your space, adding whatever personal touches or symbolism you see fit.  You can do a line, and the menorah-like lighting that I plan to do is totally not necessary: doing the candle workings as stand alones from night to night is totally workable too.

Choosing the colours of your candles can be as simple or as complicated as you like. For me getting the elemental colours meant that I didn’t need to go hunting for any out of the ordinary candle colours. Carving the symbols into the candles is a good way to charge them with that zodiacal sign’s energy, and you can anoint the candles with corresponding oil, or burn the appropriate incense, or add crystals, or other enhancing elements to your working space if you choose.  It is good to note that while the candle holders suggested above are somewhat sturdy, they can also be prone to tipping depending on how flush you make them. Like all things to do with fire, proceed with caution and use extra care when burning candles.

Happy holidays and all the best in the new year!