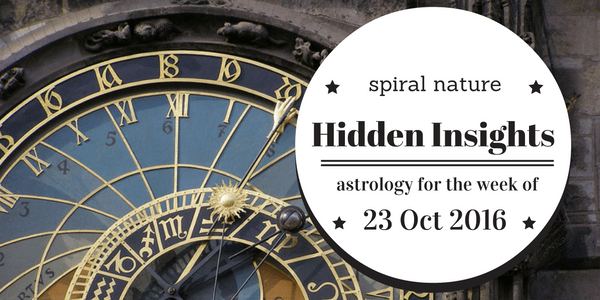 Welcome to the hidden insights of Scorpio season.

The Sun moves into Scorpio today, 23 October. Scorpio is ruled by Pluto, also known as Hades, who had a helmet of invisibility. Pluto is the god of the underworld, working in the realms of death and rebirth, spirituality, and the occult.

Doesn’t it make perfect sense that Samhain would fall in October, when the Sun is under Scorpio’s influence? Pluto is also the god of mining — and we’re not just talking about mining for gold, but also minding the depths of our souls, our spirits. It’s a time for spiritual wealth.

Scorpio season is a special time to go deep with your path. The Sun is shining its light into darker realms that we might not be able to access as easily throughout the rest of the year. Connecting with the spirits of your ancestors, or with those who have passed who you honour and respect (pop culture magick, anyone?), can be a particularly potent practice at this time of year.

Taking up a devotional to the deceased, re-dedicating yourself to your spiritual practice, or creating a new ritual for yourself to mark the transition into a darker part of the season are all examples of how you can make the most out the Scorpio energy we are moving into this week.

For some added inspiration, this week’s horoscopes include a suggested dead poet that you might want to use for a devotional.

You don’t normally need anyone to tell you to be bold, Aries, but 2016 hasn’t always been the confidence booster you might have been hoping for. But this week, you would be wise to latch onto whatever surge of strength you feel coming on. The transformational shifts that were initiated during last week’s Full Moon in Aries — a full-circle moment for you — are continuing this week, pushing you towards uncharted territory. There is a new thread weaving your mind, body, and soul right now that might have you feeling as though the gods are moving through you. Don’t question it, Aries.

If you were going to open the floodgates and invite in a ghostly companion for a few weeks, I think you would be wise to choose an artist — hopefully you like the one chosen for you here. Why is it so fitting right now? Because you are primed to learn, listen, explore, and express right now. In fact, I think that whatever you choose to open yourself up to right now has the potential to make such an impression on you that you’ll find yourself inspired towards some new, open roads. So choose your influences wisely at this time. Beauty can be a portal for you right now.

Have you ever heard of lightning struck wood? It’s used to increase power and luck to any magick you might be working and, just as the name suggests, comes from trees that have been felled by fateful bolts. This week, I think you’ll be attracting some lightning of your own. It will help to illuminate a path that has been feeling dark for you lately, one that’s been keeping you feeling disconnected from your true nature. But that light is going to come on fast, so watch out for it. Eureka moments can be as invigorating as thunderstorms, but can be over just as quickly. If you’re paying attention, you might miss the show.

There is no getting away from Scorpio’s intensity this week, Cancer, but don’t shy away from it. You and Scorpio are both comfortable within the depths of your emotions, though there is some serious karmic energy in the air for you. If you’re willing to do the work — and that might mean some heavy dream interpretation, meditation, or your own blend of cosmic journeying — you have the potential to burn off some karmic ties once and for all. Sure, on the front end, this is heavy duty homework, but by the time the Sun moves into Sagittarius next month, you can have a big weight off your shoulders.

What’s been getting in your way this year, Leo? I know you’re not one to take kindly to anyone or anything that holds you back, but this week brings some creative breakthroughs about how you can get ahead. The solutions are a lot simpler than you might expect, so don’t be too quick to write off anything that seems insignificant. What you’re moving towards is a lot closer than it might feel, and with a few small tweaks, you can start to see that things are poised to come together. The important thing is that you keep doing it all your way. Your ideas and imagination are going to set the direction.

Careen. This is the word I want you to use as a mantra this week, Virgo. What does it make you think of? For me, I picture a red sports car cruising down an empty California highway overlooking the ocean. There’s an element of danger, but the risk feels so good — so freeing — that the consequences are barely an afterthought. Now, I’m not advocating you rush out and drive carelessly, but I do think this is a time for you to surprise yourself with the reality you create this week. Carve out some new experiences that you didn’t see coming. Let yourself be late for the party. Say what you really think. Blow off an obligation that you totally resent. Find a new kind of freedom and let yourself roam.

With Jupiter in your sign for the next year, I think you’re going to come up against some big decisions when it comes to the ties you need to sever. Remember that Jupiter is known as the opener of the way; it expands whatever it touches, and that means this can be a big year for you, Libra. But with expansion comes change. You might find that things you’ve been waiting and wishing for are finally beginning to show up for you, and you’re going to have to make some space for them to enter. What’s going to give, Libra? I don’t see that this is the week where final decisions have to be made, but it wouldn’t hurt to start paying attention to what the future can and can’t hold.

Happy birthday, Scorpio. Welcome to your new year. You are traveling in on some auspicious alignments that are sending you some deep intuitive hits. Pay attention to what’s welling up from within these days; a golden opportunity can begin as a small idea for you right now. You are poised to develop a deeper connection to your soul’s path and purpose, so it makes sense that your intuition is going to be operating at full capacity right now. It’s always been your ultimate guide, Scorpio, and the weeks ahead are prime time to uncover some new information about why you’re here, and where you can go next.

Do you feel like doing a little bit of homework this week? I think it would benefit you to put your creative talents to use (even if you don’t see yourself as particularly creative) and make a talisman that you can carry with you for the next month. I’m picturing it as a locket or a pouch that you can wear or keep in your pocket. It should contain some images that remind you of who you are and where you are going. Put some power thoughts into it and program it to act as your compass as you begin to take steps to create a new reality.

What can you offer others, Capricorn? You might not always feel it, but you are hard-wired for industriousness, and some of that energy is waiting to be funnelled into an act of service. Perhaps for you this service comes in the form of giving more attention to your deities, in building an ancestral altar for Samhain. But perhaps you are feeling drawn to do more than that, to merge your spiritual self with everyday acts of service. I see you becoming a beacon for someone else at this time, a transformative presence that can show a lost soul how to move forward.

Turn the world on its head this week, Aquarius. Or, at least the world that’s within your reach. It’s time to get back into your element, even if that means inventing a whole other category within which to exist. There is a wild new possibility growing inside of you; it’s been taking root for the past few months, but this week brings a turning point when you can finally start to see how it can take greater shape, and what its implications might be for you.

What do you want out of this Scorpio season, Pisces? You feel so much, all the time, and Scorpio energy is no exception. I think before we get too deep into the weeks ahead, it would be wise for you to set some intentions around the types of transformations you feel you’re ready for. The weeks ahead could act as a bit of a rite of passage for you as you do some much-needed work on where you’ve been and what parts of your past are worthy of following you into the future.