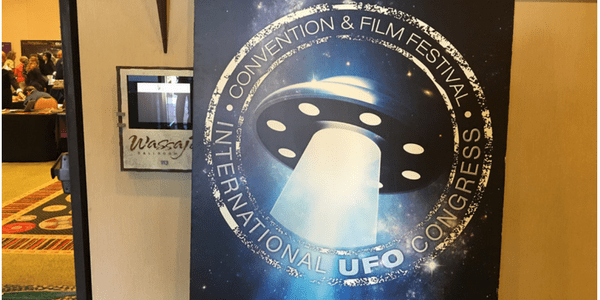 As a multiplicity of creatures exists on Earth, so there could be other beings, also intelligent, created by God. This does not conflict with our faith because we cannot put limits on the creative freedom of God.

“Luckily, no one gets burnt at the stake anymore,” Alejandro Rojas says with a wry grin. The large conference room fills with nervous laughter. It’s not hard to hear an unspoken “I’m not so sure about that” buried underneath the titters and guffaws echoing across the We-Ko-Pa Resort.

Rojas is the first speaker for the second day of the 26th annual International UFO Congress. As the director of operations for Open Minds Production, he’s also the main organizer of the event. He’s speaking in front of a large crowd of people. The demographics skew mostly old and white; at 34, I’m probably the youngest person in the room. 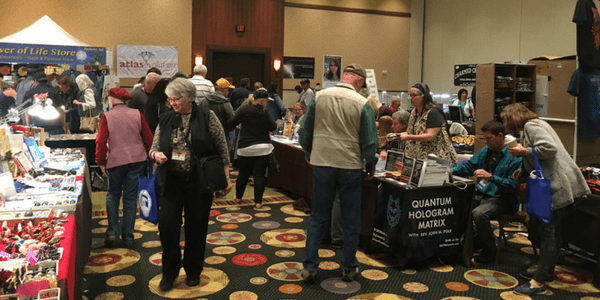 The large turn-out isn’t too surprising: the UFO Congress in Fountain Hills, Arizona is one of the largest annual UFO events in the country. The fact that this hotbed of ET (extraterrestrial) theorizing and experience sharing is taking place in one of the most whitebread areas in Arizona just makes the event even more surreal. It’s perhaps the only thing that happens in Fountain Hills that’s more interesting than the town’s gigantic freshwater titular fountain that spews up a frothy column of water so tall you can see it from miles away; it looks like a geyser bursting from the blowhole of a titanic-sized whale.

The We-Ko-Pa resort looks simultaneously elegant and shabby, much in the same way that all casinos do. I take a look at the carpeting while Rojas is speaking. The floor is decorated with elaborate wheels and circles. I think they’re meant to resemble Native American iconography, but they could just as easily pass for UFOs. 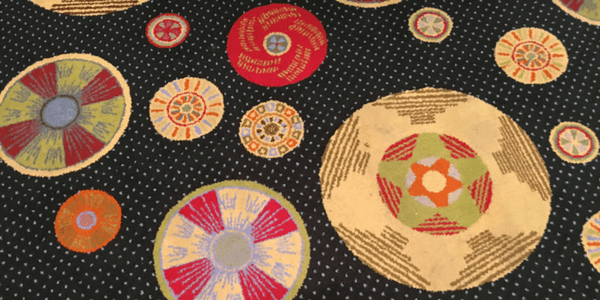 Rojas is presenting a lecture on ETs and religion, talking about how belief in extraterrestrial life has influenced religions and inspired new ones. It’s a sober talk, devoid of the kind of feverish speculation and Chariot of the Gods contorting of history you might expect at a conference like this.

He spends a good amount of time talking about how religions would react if aliens actually made contact with humankind, arguing that most modern faiths are actually more alien friendly than you’d think; Pope Francis has gone on record saying he’d baptize Martians, after all.2

Rojas talked about how some evangelical sects believed that aliens don’t exist — they’re just a disguise used by Satan to trick mankind. He also brought up theories being bandied about by Franciscan groups that if aliens did exist, the Christian savior would appear to them as one of their own kind in the same way that He would manifest as a cat if He were preaching to felines. “The saviour would come in the form of those he’s trying to save,” Rojas explained.

He also brought up New Age religious groups like the Aetherius Society and the Raelian Church, but didn’t go into too much depth about how ETs have influenced the occult world.

Leaving the lecture hall as his talk wrapped and drifting over to the exhibitor hall, it wasn’t hard to see the occult influence there. For every table selling books on secret UFO history or hawking reproductions of Roswell newspapers, there was at least two selling heaps of healing crystals. One table promoted the metaphysical powers of the Sedona vortex, while another table sold piles of Fate magazine back issues. Little green men plushies, “I want to believe” t-shirts, and flying saucer posters were all over the place. 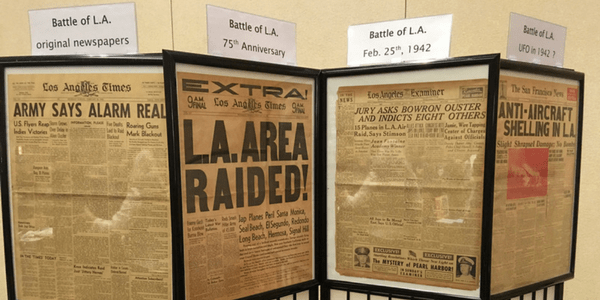 It’s that sentiment, “I want to believe,” that unites the occultist with the UFO enthusiast. Both groups are people who live in a universe dominated by materialistic thinking, that won’t give an inch towards conceding that maybe there’s something to the weirdness that both groups pledge themselves to.

I talked with the hosts of an alien radio program once, and they had opined that people believe in the paranormal because they want to believe there’s something more to the world than what they can see, that this isn’t all there is. I have to admit that a large part of my interest and practice in the occult is animated by the same belief. Every spell, every experiment, every metaphysical exploration an attempt to chip away at the armour of reality and see if there’s anything on the other side of it. I want to believe.

Most of the talks at the congress aren’t related to magick or the occult, or could even be considered occult-adjacent. They are interesting, nevertheless: eyewitness accounts of the Phoenix Lights; a look at the strange phenomena surrounding the Dugway Proving Grounds in Utah; a lecture on the sightings in Norway’s Hessdalen valley.

One lecture that happened later in the weekend that was really intriguing was by a neuroscientist, Dr. Bob Davis. A researcher with the Dr. Edgar Mitchell Foundation for Research into Extraterrestrial Encounters, Davis had interviewed over 3,057 subjects who had reported experiencing either abduction or some kind of significant encounter with otherworldly figures. He was trying to discover if there were any similarities that cropped up between these subjects. 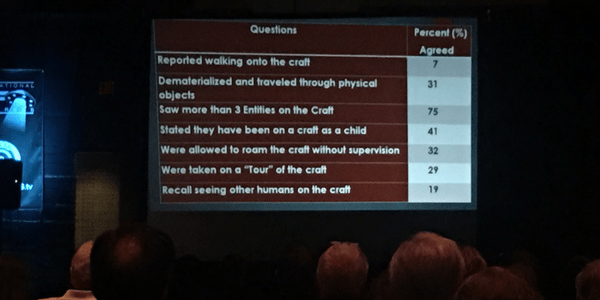 The findings he presented at the conference showed a striking correlation between abduction experiences and near-death experiences. Most of the subjects he talked to had reported an increase in compassionate thinking, an emotional openness, and a growing awareness in ecological issues after being abducted. They also, as a majority, expressed a strong belief in life after death, and seemed to have a decreased fear of death as a result of that belief. All these “side effects,” Davis noted, matched up with the personal changes that often affect people after a NDE.

Davis admitted that he wasn’t a believer in ETs or UFOs before beginning this research, but is now “99% convinced this is real” due to the staggering number of commonalities he’s found among so many different subjects (who didn’t have prior knowledge or contact with each other).

After the Davis lecture, UFO researcher and investigator Kathleen Marden did a talk on “Perplexing Phenomena Related to Contact” that would have made the ghosts of Charles Fort and Robert Anton Wilson very happy. Following up on Davis’ own research, Marden had conducted a poll amongst abductees to see if they had witnessed any paranormal activity in their home after their contact experience.

88% of the people Marden reached out to reported a broad range of phenomena: spontaneous healing, matter passing through matter, poltergeists, disappearances, orbs of light, even instances of things slipping through cracks of time and resurfacing years later (one subject reported losing her driver’s license 25 years ago; she found it again, lying on the floor of her empty garage, 25 years later after moving three times to two different states).

Marden also talked about how people would often report seeing giant owls or large humanoid rabbits in the vicinity of UFO sightings. She told the story of one case study where a subject, after being haunted by floating orbs of light in his home, experienced a time slip and saw wooly mammoths stomping around outside his window where an airstrip used to be. Marden, like Davis before her, didn’t come across as a fervent true believer. She spoke like someone who believed there was something to all this craziness, but wasn’t necessarily ready to co-sign on mammoth sightings just yet. 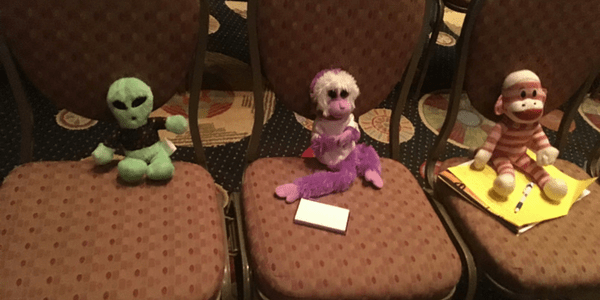 Throughout the congress, I felt a real sense of kinship with the audience members and presenters. It’s rare, in our culture, to meet people who not only believe in fringe subjects, but have enough presence of mind to be skeptical and open-minded about them. I’ve lost count of the number of times I’ve felt alienated during a conversation with a fellow occultnik when any expression of doubt on my part about my own experiences and beliefs was treated as an attack on their worldview. Being around people who were so open to examining and interrogating their own views was refreshing.

Leaving the congress, I thought about the “I want to believe” poster hanging in agent Fox Mulder’s office. I wondered what the occult version of that poster would be like. Instead of a UFO hovering over a forest, would it be a flaming pentagram carved in soil? Or a spread of tarot cards, arranged over a red silk cloth? Maybe it would be a picture of a chaos magician, a Grant Morrison-lookalike hunched over a sigil and masturbating furiously. No matter the picture, the message is the same: God, I hope this works. I hope I’m not wasting my time. As Bjork once sang: “there’s more to life than this.”