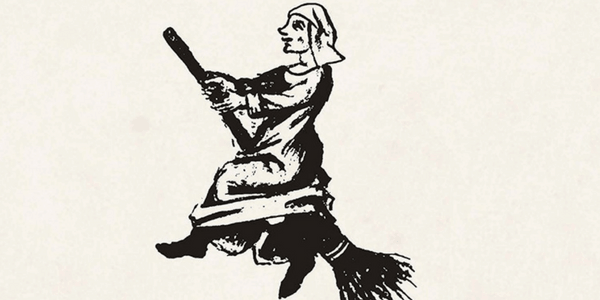 For many years now, Ronald Hutton has been one of those genial academics who regularly pop up on British TV documentaries and prime time shows to offer intriguing sound bites on their chosen specialism. As an acknowledged expert in Paganism and British folklore, no seasonal news item on the origins of Hallowe’en or (yet another) program purporting to solve the mystery of Stonehenge is complete without a view from Professor Hutton. But as anyone who is familiar with his literary output will know, he is far more than just a flamboyantly dressed “boffin” with a media savvy screen presence. Over the course of his career, Hutton has been responsible for some notably insightful, accessible and occasionally controversial books covering subjects such as the ritual year, Shamanism and the history of Druidry. His latest work, The Witch, is an impressive addition to that body of work.

Unlike his earlier volume, 2001’s The Triumph of the Moon,1 which dealt with the origins of modern Pagan witchcraft, Hutton’s new book delves into some of the earliest evidence for the emergence of the witch as a cultural figure — one who incited the fascination and hostility which would eventually inform medieval and early modern witch trials, as well as remaining “one of the very few embodiments of female power that traditional western culture has bequeathed to the present.”2 Hutton endeavours to breach the gap between scholars in the Anglophone world, who have largely concentrated on the structures of social and political power to interpret the witchcraft phenomenon, and their continental European counterparts, who have had a greater interest in the anthropological and folkloric elements of the subject.

As a consequence, the historical and geographical scope of The Witch is considerable. A sizable portion of part one is taken up by a global comparison study of attitudes to witchcraft across the non-European world, which then leads to a similar exercise in determining beliefs and practices in ancient Europe and the Near East, before concluding with an overview of pan-Eurasian shamanic traditions. Such in-depth research drives home the point that, as Hutton says, “There is little doubt that in every inhabited continent of the world, the majority of human societies have believed in, and feared, an ability by some individuals to cause misfortune and injury to others by non-physical and uncanny means.” He goes on to quote historian Robin Briggs’ proposal that a fear of witchcraft is “a psychic potential we cannot help carrying around with us as part of our long-term inheritance.”3

In case it sounds like The Witch is little more than an extended ethnographic data survey, there’s much more to it than that. Hutton’s exploration of how the witch figure evolved — and the spectrum of stereotypical qualities it accrued from the late antique period until the 17th century — is an object lesson in how to write engaging historical narrative. Of particular note is his discussion of the history of Egyptian-influenced early European ceremonial magick (which in the guise of sorcery came to be seen as virtually indistinguishable from witchcraft) in that it manages to cover so much enlightening information on the subject within the space of a single chapter.

With regard to the rise of the European witch trials, Hutton asks some searching questions about why this whole phenomenon gradually became the subject of increasingly widespread legal reprisals in the mid-15th century — rather than in the lengthy historical time span before then, when witches had been accepted as a fact of life in most communities but, for the most part, hadn’t been publicly and systematically purged. He isn’t the first to point to the advent of early modern witch hunts as a symptom of the crisis in European post-Reformation Christianity, when the hunt for religious heretics created a general atmosphere of fear and suspicion towards those whom the community deemed sinister. But it is the judicious way in which Hutton builds up evidence of this, and carefully assesses its validity, that lends such weight to his conclusions.

In accordance with Hutton’s stated technique throughout the book of analyzing his subject matter in a series of narrowing circles of perspective, he finally ends up in the British Isles to focus on how one specific region of Europe envisaged its witches during the early modern period. Here we enter the realm of deep-dyed popular folklore where faeries and other mercurial entities haunt the landscape, as members of that nocturnal retinue are said to accompany the witch on her malevolent jaunts through slumbering villages. Several examples of unsuspecting mortals who visited supernatural realms as a result of encountering these eldritch beings, or alleged they had first-hand experience with the animal familiar (that traditional companion of the witch in non-human form), give this part of the book an engrossing anecdotal ambiance, as well as offering some revealing and distinctly unsettling evidence of what phantasms lurked in the more tenebrous corners of our ancestors’ minds.

All in all, The Witch isn’t a book for those with only a passing interest in the cackling hags of popular culture. Instead, it’s a meticulously researched, erudite attempt at gaining a real understanding of the beliefs surrounding witchcraft, the various ways in which they developed around the world, and how they gave rise to the European witch trials. Refreshingly, the tone throughout is one of a genuine, immersive curiosity about the subject, rather than the implicit world-weary cynicism which so devitalizes some other scholarly surveys on the subject. True to form, Ronald Hutton has delivered a work which, rather than lecture the reader, invites them to consider the range and depth of his findings and draw their own conclusions. In the process, he has also produced what is likely to be the standard work on the subject for several years to come.