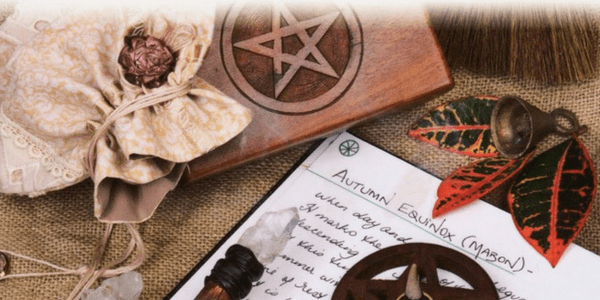 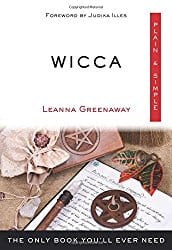 I was very excited to read Wicca, Plain and Simple. There is something so satisfying about a guide entitled, “The only book you’ll ever need” — especially when, as in this case, the volume is just 125 pages long. This isn’t to say I am credulous, only that I enjoy the idea that one book could cover a topic so authoritatively as to declare itself the only one needed. It turns out of course that the publisher has a whole series of volumes under the “only book you’ll ever need” tagline. So it’s worth noting that the reader of this book should pick it up with reasonable expectations — it’s not “the only book you’ll ever need,” it’s a primer about Wicca. After I read the book I thought about the idea behind the series, and it struck me that occultists aren’t typically people who are seeking the “only book” on any one topic — we tend to be people who love nothing more than many books, covering the minutiae of every facet of the corners of occult thought that interest us. I think this is probably true of Wiccans in particular, and witches in general.

To start things off, we have an intro by Judika Illes — a prolific and wonderful author of many books (a number of which that have been reviewed by Spiral Nature!) much loved by witches.

Related: Magic When You Need It, reviewed by Kalagni

Judika clears up one issue I noted with this book — the conflation of Wicca with witches. She notes that the designation of “Wicca” tends to be one taken up by practitioners of the Gardnerian tradition. Suffice it to say though (as one who has been corrected by a ticked off witch!), not all witches consider themselves Wiccan.

Greenaway includes a disclaimer in her preface — noting the publisher and author accept no liability “with respect to any loss or damage caused, or alleged to have been caused, directly or indirectly by the information contained in this book.”1 This struck me as quite odd, and in all the books on occult theory and practice I have ever read, I haven’t seen a disclaimer before.

The design of the book is just larger than pocket size and, as noted, at only 125 pages it’s a pretty thin volume. The only odd thing about the layout is the artwork. It’s basically digital clip art which looks pretty bad; inconsistent and amateurish. Greenaway has divided the book into 14 sections, the first being “Witches and Magic,” wherein she describes various traditions of witchcraft, including her own tradition, “Angelic Wicca,” which is inexplicably set apart from the other traditions listed (those being the ones most of us are familiar with: traditional, Gardnerian, hereditary, hedge witch, etc.). Her description of the the Angelic Wicca tradition typifies the writing style of the book:

Angels are becoming more popular, and many witches, like me, prefer to work with this newfound angel energy. Many Wiccans are gravitating to this way of thinking because the god and goddess theory is now a little out of touch. The people I speak to are more comfortable with angelic worship and find it more personal.2

Clearly, she’s promoting this branch of Wicca, which is certainly not something that witches would necessarily be familiar with or interested in — it’s not the typical writing style you see in most occult publications. And, it struck me as a bit fatuous and hardly authoritative on the subject of Wicca, for any author, much less a volume billed as the only book one might need.

She covers the tools of the witch trade competently, then moves through various other considerations, including lunar magick, initiation, gardening, animal magick, tarot, magnetic magick, pendulums; and the last four chapters are devoted to spells. Throughout the book, there is evidence of assertions that Greenaway makes, with little context and no thoughtful explanation. Discussing lunar magick, she writes

The Moon is traditionally linked with the feminine aspect and the functions of the right side of the brain, which tend to influence creativity and insight. Men also possess these functions, but they tend to be found more abundantly in women.3

I absolutely hate this type of groundless, essentialist nonsense, especially when it’s being marketed as Wiccan knowledge. It goes beyond bad writing, to the underlying reliance on opinion and the total lack of substantiating information that would provide context. There were no references to support her claims, such as women’s apparent greater capacity for creativity and insight. It’s frustrating to me that this type of writing escaped the notice of an editor. In the section on animal magick, she doesn’t discuss witches’ familiars, or even the concept of respect for animal species and wisdom. Instead, she relates two personal stories: one about her natural affinity for birds, another about a fox visiting her mother’s home, and tells the reader that, “Most White Witches have an affinity with creatures.” This is the first time we see mention of “white witches” — I wonder who and what they are. Most sophisticated witches have likely encountered concepts of white or black magick, but these distinctions aren’t usually taken seriously by modern witches beyond the foundation of the Wiccan Rede with its injunction to do no harm.

Many of the spells and rituals mention calling on the witches’ angel. Again, Angelic Wicca just isn’t so prevalent that it would be expected to underpin an entire introductory volume on Wiccan. An entire section is devoted to magnetic magick (using the polarity of magnets for a multitude of physical ailments), from chronic fatigue to arthritis and various types of pain. Perhaps this is the reason for the disclaimer at the start of the book — magnetic magick isn’t ordinarily an entire chapter of a Wiccan primer. I’ve seen them used in attraction spells, but it seemed like Greenaway is advocating magnet use as an alternative healing modality. In the chapter, she doesn’t discuss lodestones except to say that Cleopatra wore one to offset ageing.

I found Wicca, Plain & Simple very odd in tone and content. I’m not sure how else to describe it. I think there are many more useful books on the market that readers seeking a basic Wicca book would really appreciate. I think the goal of a book like this — a “plain and simple” book — is to give the reader a foundation of knowledge that might provide a springboard to other resources. There isn’t a suggested reading list here, which I think is sorely needed. Nor is there even an index that might help orient the reader. Sadly, I found this book very lacking in substance and charm.