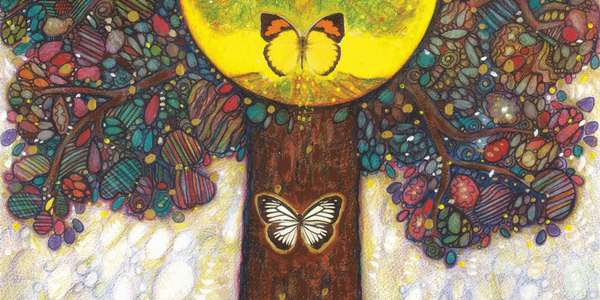 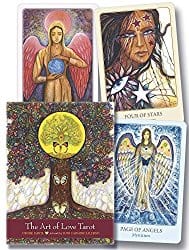 The Art of Love Tarot deck created by Denise Jarvie holds a potent type of nurturing, earthy magick. Featuring the heartfelt artwork of Toni Carmine Salerno, creator of the Gaia Oracle and Magdalene Oracle decks, the tarot becomes a living, breathing messenger of amiable wisdom through these cards.

There is a soft delicacy within these cards, which could be felt before I even opened the box. As I slowly unwrapped the deck, it was as though a golden light was streaming forth from within the deck and gently radiating up through my finger tips, right into my soul, where it bridged a connection between my mind, heart, and the cards. The sensation wrapped me in its arms and I felt as though I was receiving a great, giant, warm hug from the Great Mother herself. Holding the cards, I was filled with a sense of delight often reserved for more mystical moments of harmony, as though all universal life forces had combined and I was held in a sense of limitless sublime delight. I was excited to see what the deck had to say!

The deck features the standard 78 cards of traditional Rider-Waite-Smith tarot, but the names of the suits have been changed. Rather than the traditional wands, cups, swords, and pentacles, Jarvie chooses to use stars, hearts, angels, and trees respectively. The guidebook describes how she came to associate these symbols with each traditional suit, offering beautiful descriptions of the association between the symbol of representation she chose and the traditional meaning. This design allows for a unique energy to be brought to the tarot. The combination of stars, trees, hearts, and angels seems to open up the wisdom channelled throughout, and seems to be coming right from the centre of it all — in connection with both the cosmos and Earth with the help of healing guides in a sincere, centred way. 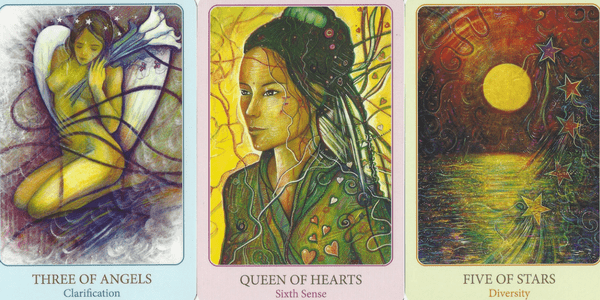 Also included in the opening section is a guide on how to use the cards, read reversals, set intention for readings, and a few deck spreads to get started with. The major arcana cards are also not named like those in a traditional Rider-Waite-Smith deck — with the exception of a few cards, Jarvie has named the cards according to a motif of their meaning. In this, she blends her interpretation with the poignant artwork featured on the cards to revitalize the tarot with a new perspective of how the cards can be read or interpreted. In the guidebook, both major and minor arcana feature a one-page description that provides the name of the card, a one-word synopsis, a message of guidance, a description of the card’s artwork in relation to the message, a detailed meaning of interpretation for the card and finally, the corresponding Rider-Waite-Smith card. The interpretations of the cards offered by Jarvie are honest, authentic, and straightforward to deliver meaning in a way that expands on one’s perspective and allows for a new viewpoint of a situation to arise. Even as an experience reader, I found them to be very insightful and comforting.

The cards themselves are a bit large, which can make them a handful to shuffle. Though, once broken in through a few shuffles and readings, the cards seem to soften a bit, and become more manageable. Each card has an absolutely exquisite piece of artwork — centred on the theme of hearts, angels, stars and trees — playing as a colourful adventure for one’s eyes to look over. Quite a few of the cards are absolutely breathtaking to flip over and observe; the spreads created truly look like majestic pieces of art and the images would look beautiful on any altar space.

The artwork takes up most of the card, but underneath each picture is the name of the card with a one- or two-word summation of the card. For instance one card says, “Ten of Angels” with the word “Surrender” written below. The combination of the imagery and word at the bottom seems to add potency to the cards, while also making them more accessible for beginners. The cards of each suit are colour-coded as well to make this a very attractive, aesthetically diverse deck.

So far, I have found the messages coming through The Art of Love Tarot to be very accurate and insightful. The energy opened by using this deck seems very grounded and Earth-based but also incorporates the angelic realm of love. I find this deck a wonderful combination for I am always looking to balance the realms of the cosmos with the magnificence of Earth wisdom, which this deck has achieved perfectly. I have used this deck with a number of my clients, and they all were in love with the imagery of the card and found the messages coming through to be inspiring. One client noted the imagery has its own power that heals the heart and refreshes the mind. I highly recommend this deck to beginner and advanced readers alike. This deck is accessible and timeless at the same time and would be a great addition to any collection.