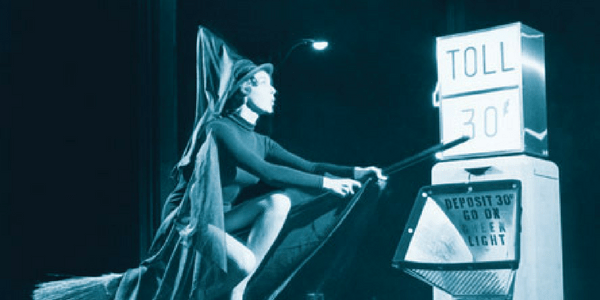 I really wanted to like The Weiser Field Guide to Witches. For one thing, I like and admire Judika Illes, whose Element Encyclopedia series I consider useful, as well as beautiful, well-researched, and wonderfully organized. I was prepared to thoroughly enjoy spending more time with her blend of wit and erudition. The subtitle, “From Hexes to Hermione Granger, from Salem to the Land of Oz,” is marvellously enticing, as well as the idea given in the back cover copy that the field guide could help you, the reader, discern if you are a witch.

The first indication that the field guide might not be quite useful was a rather embarrassing error, misnaming “Diane Valiente,” instead of Doreen Valiente.1 The second was a somewhat scatter-shot approach to the subject — I don’t expect a field guide on such a broad topic to be exhaustive or all-inclusive, but I was rather taken aback to find, for example, Glinda and the Wicked Witch of the West approached solely in terms of their movie portrayals. (One might think, from this guide, that L. Frank Baum never wrote at all.) The Owens sisters from Alice Hoffman’s Practical Magic and Bellatrix Lestrange from Harry Potter were approached purely in terms of their movie renditions, as well, an odd and somewhat displeasing choice since Harry Potter himself — and the redoubtable Hermione — are rightly put in the literary section with merely a mention of the actors who played them.

Though I was pleased to see Kim Novak’s Gillian Holroyd from Bell, Book & Candle as well as Spirited Away’s Yubaba, the treatment of movie and television witches seemed shoehorned in. As well as being somewhat dated (always a risk with pop culture), and despite Illes’s best efforts, the movie and television sections had more the flavour of promotional material than a practical guide. The television and movie sections could have easily been subsumed into the literary section, providing an overview of witches in the arts that might have some utility.

It’s in structure and organization that this field guide falls shortest. Some sections — types of witches, an overview of famous or infamous occultists who might qualify as witches (Cagliostro and Eliphas Levi make appearances, as well as Aleister Crowley) in history, the tools of the trade, divine witches, and animal witches — are well done, and could easily have made a wonderful and useful little book.

Yet, the overwhelming sense I had upon completing my second reading was of mission creep and slapdash organization. For example, the “Hunting Witches” section is fascinating, detailing among other things the accusation of witchcraft levelled at such diverse subjects as Joan of Arc, Anne Boleyn, and Erzebet Bathory. Unfortunately, those entries might have served the guide’s purpose better in the second chapter about historical witches, as well as providing much-needed context.

Of course considerations of space (distilling such a complex subject as witchcraft to 267 pages is no easy task) probably played a major role, but the decision to engage in such a scattershot approach does neither the subject of witchcraft nor Illes’s strengths as a researcher and author justice. The guide also has no index, so despite many entries being alphabetized within their chapter, the overall effect is of hyperactive flailing.

That isn’t to say the book is without its high points — the case for Moses as a witch, mention of Laura Malpero’s Book of Shadows, and the section on Paschal Beverly Randolph, to name a few. Illes’s careful attention to providing views of non-European occult traditions is welcome and sensitive. In the end, though, with The Weiser Field Guide to Witches I wish Illes could have created a series of field guides with tight focus and proper indexes, instead of the equivalent of occult junk-food.