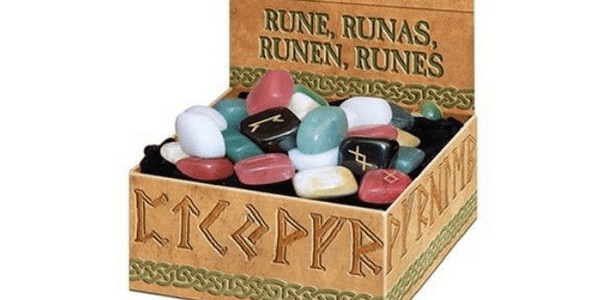 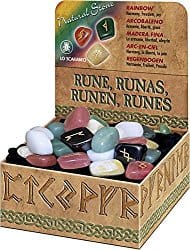 Runes are a set of 24 stones or tiles inscribed with symbols based on the early Germanic alphabet, dating back to around 150 CE. Today’s modern runes include 24 letters of the Futhark alphabet and one blank tile. They are used for purposes of divination and magick.

The word “rune” means “secret” or “something hidden.” According to legend, runes were first given to the Norse god Odin. Odin was a passionate seeker of knowledge and was prepared to pursue wisdom at almost any cost. In a self-sacrificing ritual, he suspended himself upside down from Yggdrasil — the world tree — for nine nights. After this time he saw the runes in the tree’s roots. He picked them up and fell from the tree. Henceforth, he used them for magical and divinatory purposes.

The names of the runes we use today bear magical significance. For example, Tiwaz is named after the god Tiwaz, who dwelt in the daytime sky. That is why the symbol on this particular rune is an arrow pointing upwards. It was often used to signify victory in battle.

For the purposes of divination, runes are cast. There aren’t really any formal rules. Generally, to perform a reading you focus on the question or issue, draw nine runes and place them face up on the table or floor. Read the runes in the order they were placed. Alternately you can cast a number of runes onto the table and read the ones that land face upwards.

The Rainbow Runes is a beautiful set made from a range of tumbled stones including cherry quartz, white jade, hematite, watermelon crystal, and green aventurine. Each stone has its rune engraved on the surface and coloured in gold. The runes are small, unevenly shaped and completely smooth. The polished stones feel great in your hands and are perfect for casting. They come nicely boxed with a black velvet pouch for carrying them conveniently.

There is a small instruction booklet included with the set. The 3 inch x 3 inch booklet has a page of notes on the history of the runes. The next page outlines two methods of rune casting. One involving tossing down the runes and another using the runes related to the querent’s initials and date of birth. Over the next four pages there is a brief, paragraph explaining the meaning of each rune and indicating the period on the calendar and the time of day each rune relates to. The rest of the book has the same information repeated in several different languages. On the back cover of the booklet the runes are depicted with their names and numbered 1 through 25. It would have been better if the rune images were also included inside the booklet along with their meaning.

I would recommend the Rainbow Runes set, because it is delightful to look at and has a great feel. However, if you’re new to rune casting I would also recommend that you purchase a rune casting handbook to accompany them. Some good options to get you started are Nordic Runes: Understanding, Casting, and Interpreting the Ancient Viking Oracle by Paul Rhys Mountfort and Runelore: The Magic, History, and Hidden Codes of the Runes by Edred Thorsson.