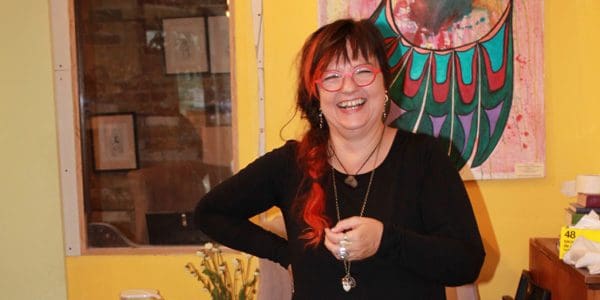 Monica Bodirsky has been reading cards for more than 35 years. She’s also an award-winning mixed media artist, whose work — often in collage and haunting watercolours — explores old wisdom, ancestry, and “the narrative of the invisible.” Bodirsky is also a designer, a teacher, and a witch.

To celebrate the July 2016 release of her Lucky Lenormand oracle deck – a modern take on the classic Lenormand playing card game (and oracular tool) — the artist offered a series of talks around Toronto over a series of months to offer the public a glimpse into her magical and creative process.

I had the chance to attend one of these talks at the Hermit’s Lamp earlier in the fall, but this wasn’t the first time I had witnessed the artist’s magick. Over the summer, I was lucky enough to attend an artist residency led by Monica Bodirsky at Gibraltor Point in Toronto titled “Awakening: Earth Based Spirituality and Creativity.” Her teaching was dedicated to facilitating a deeper understanding — of self, of practice, and of the world — for all participants involved. Her approach was mindful, and the experience facilitated for me learning that was — much like Bodirsky’s creative practice — somewhere between “the messy and the clean.” Bodirsky encouraged participants of our residency to self-reflect in a way that was honest, intuitive, and welcoming of all types of emotions, experiences, and ideas, but that encouraged a critical healing and letting go that allowed us to grow as creators. She also offered to many of us really practical suggestions for approaching our practices in a grounded way, as someone whose practice is at best, erratic — this was one aspect of her pedagogy which I so appreciated.

The only reading I’ve ever had from Bodirsky came in the form of a one card pull during the beginning of our residency. While I was not sure what to make of the simple symbol on day one, with the help of the deck and Bodirsky’s teachings,   I learned a hell of a lot of myself in just one week and just one card. When the say the cards are a teacher, they sure don’t lie.

Monica Bodirsky’s talk at The Hermit’s Lamp offered up a good chunk of history about Lenormand cards, and also commented on the contemporary relevance of the system. She noted that in the past five years Lenormand has “made a very huge comeback,” but that it is also

a very old oracle, it has the name Lenormand, but that doesn’t necessarily mean that Madmeioselle Lenormand used them. It means there was some speculation about her using them, because she used a lot of different cards it wasn’t clear if this was the only deck she used or one of many. Mademeioselle Marie Anne Lenormand was a very well known seer for Josephine and Napoleon and apparently, she was so accurate, she was thrown into the Bastille twice; accused of being a conspirator. These cards actually originated with a gentleman named Johan Hechtel, a German businessman from Nuremberg who created this 36-card game. There were little markers and die, and depending on whether you landed on a good card or a bad card, it meant that you moved forward or backward a certain number of spaces.

But why a Lenormand deck, and not the tarot? As an artist and designer, Bodirsky believes in the power of direct, clear, symbolism. She says,

I always tell students that symbolism is a universal communication device. I’ve been reading a variety of cards for over 40 years now and I’ve noticed that with tarot cards people enjoy them very much, but often times some of the symbolism is too esoteric, complex or thematic for them. So, if you’re reading with the [Baroque] Bohemian Cats Tarot, you might not get some of the intricacies of original tarot symbolism. Some people find that tarot is too steeped in hermetic teachings, beginning with very ancient alchemy in the Middle East that includes Hebrew lettering and planetary symbols and numbering. This approach to tarot became really popular with Aleister Crowley and the occultist movement of the 1800s. But for many people this isn’t appealing due to it’s inaccessibility and complexity. So knowing this history, some people prefer the direct symbolism of Lenormand. 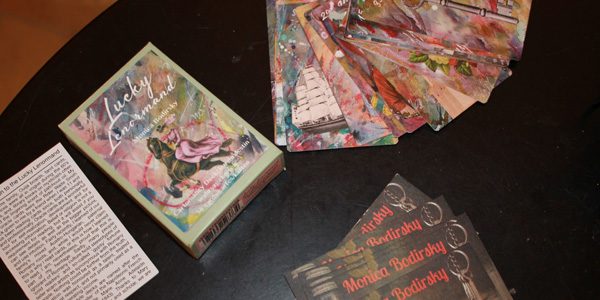 The Lucky Lenormand is based on “the original symbols of the 36 cards patented by Hechtel c. 1799,” but have a contemporary feel to them which takes the timelessness of the tool to a new place. Bodirsky says, “ I used in the original symbols and thought I would give a vintage feel, a contemporary feel, and also incorporate my own art style which is about collage and using disparate styles to create a new look.”

As I listened to Bodirsky, I felt like I was starting to understand just what a great endeavour divination deck creation can be Pagan and other magically-inclined artists.  She says that the Lucky Lenormand, named “lucky” for “the incredible luck it brought [the artist] from inception to completion,” was

a really nice challenge to me… They’re simple, they’re direct, I didn’t have to think of the complex scenery of tarot, I just focused on the background, consistency throughout the deck, and the symbols. The original names from the deck, like Lily, Book, Dog were fun to find in my vintage and antique ephemera collections. As a graphic designer, creating the design for the 2-D box in it’s unfolded format, laying out the text, and creating the colour palette, and actually, because I studied fiber arts at OCAD [the Ontario College of Art and Design], even choosing and making the pattern on the back of the deck was all appealing to me.

But creating a successful oracle deck can be challenging, and as Bodirsky explained, keeping the cards, let alone any series of works,

cohesive in their look…  is a challenge most artists who create a body of work will face. I’ve made a lot of tarot art as standalone pieces and even making four or five large pieces on linens — they started to look a little different by the last one. You know, after time passes, or you’re doing other things, we get busy and we have to put things down and come back to them, so you can lose the consistent style of something very easily. Yet, you don’t want it to look too contrived or stiff either. If you try too hard on things they tend too look a little rigid. 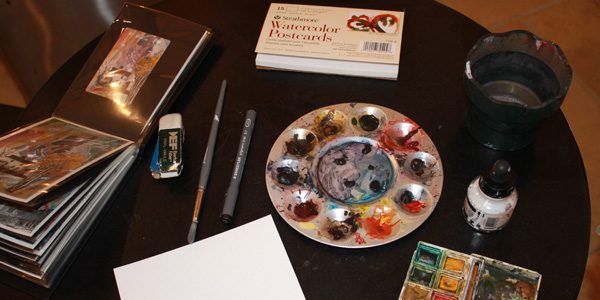 Having visited Monica Bodirsky’s studio during my residency, and also being instructed by her during that time, I had seen her attempts at taking what can be messy work — painting intuitively, ritually, and in a way that is connected to forces greater than just ourselves — and creating frameworks for order, consistency, and understanding.

She explained that her

method for keeping it all together was to begin by creating all of the backgrounds at the same time, with the same palette and size, scan them in, and check for digital colour accuracy by looking at all of them at once in thumbnail format.

The collaged imagery is all copyright free, a lot of it is from 1890s postcards, magazines, some is clip art that is copy right free, some are my own paintings like the cloud card. After sourcing and organizing all the imagery, I cut out most of it in fine detail, put it in front of me in batches of five or six cards at a time, and I matched the colours and composition of the backgrounds to the mood and meaning of the symbol. After switching pieces around for hours and if you’re familiar with collage, you know that you can re-arrange pieces endlessly, I then finally decided what fit best.

After scanning in the completed cards, I modified things digitally, like the sun card, to give it a nice “glow.” That is the beauty of digital work. There was also some cropping — many of the symbols were not as large in my original painting and collage pieces, but I modified them to be that way, so the symbol was strong and clear.

Lenormand is a simple symbol system, but that doesn’t make it not of interest to those with a curiosity for the more esoteric side of the occult. And please, do not let the slightly feminine and decorative aspects of this deck fool you. The Lucky Lenormand can be used hermetically, if that might be your thing. Monica Bodirsky says,

You’ll noticed that they’re numbered one to 36; they have the name of each card, and the playing card equivalent included as well. For people who read cards regularly and know the meaning of playing cards, these additional symbols along with the number of the card, add an additional layer of meaning as well.

For those more familiar with the tarot, or who still might be skeptical, Bodirsky says,

For those who say “I’m a tarot reader, Lenormand is too simple,” well I can tell you, there is a lot going on, and by using your intuition, proximity, even the colour in the card — you can get a lot more out of it than just simply a heart symbol means love.

While the first edition of the Lucky Lenormand oracle deck is now out of stock, Bodirsky is currently taking pre-orders of the deck’s second edition, which offers bonuses to those looking to collect the series. 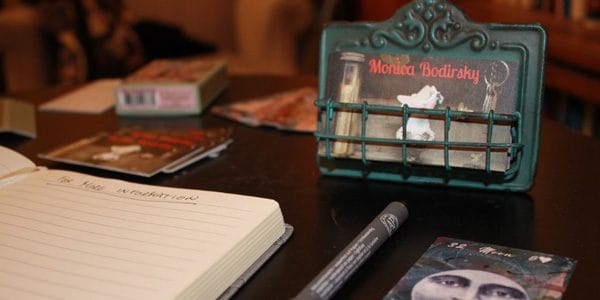 The best part of the project for me is Bodirsky’s efforts to support a local printer, making the deck extra special to hold, and also, meant to last (they’re UV coated), adding to its timelessness.

When I hold the deck in my hands, I can tell the care that has gone into the final product. Bodirsky’s designs offers up to readers and those read for rich meditative backgrounds of watercolours rippling and chattering behind symbols which beckon you to sit with them in a soft and approachable way. Softly focused on their content, my eyes are met with a glow that asks me to listen closely, and feel the signs they’re sending out. After a shuffle to get a feel for the deck, I pull out the Ship card, signalling “opportunities for business, travel, and advancement,” but whose iconography and mood easily signalled sailing forward with excitement in the form of splashes of primary colours blues, gone to sea-green in the background, long before I reached for the included little white pamphlet. The reading also rings true – I’m setting off on an exciting work related trip in the near future.

They’re slightly smaller than a normal tarot card, making them comfortable in the palm of my small hands. My only worry is the box itself. It’s well-designed and so-pretty to look at, but like most standard card boxes, they never seem to hold up with my type of use (like Monica, I’m messy). I’d totally pay a bit extra for an additional cause, perhaps in the form of a cloth or bag, and I can imagine the accompanying extra would be beautiful, based on the already existing work.

The Lucky Lenormand is a great deck for anyone looking to add a really special artist’s oracle to their collection, deepen their esoteric practice through meditation on rich and accessible symbolism, or introduce a friend to divination with a charming and vivid deck made by an experienced witch and cartomancer.

You can pre-order the next issuing of the deck on Monica Bodirsky’s website, bodirsky.com.

Special thanks to Monica Bodirsky for sharing her talk for this piece.