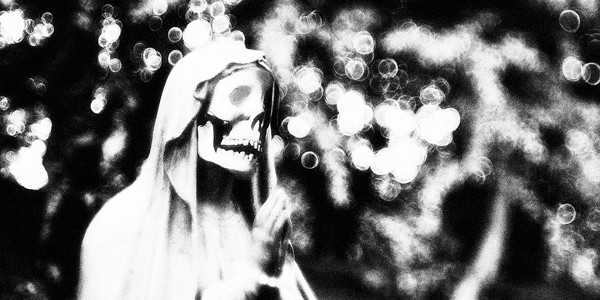 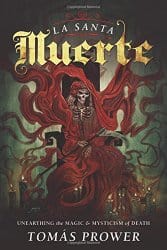 Death is an inevitable part of life: the end of it, in fact. Many people tend to shy away from this reality but some choose instead to work it into their spiritual practice. La Santa Muerte: Unearthing the Magic & Mysticism of Death by Tomás Prower shares the mysteries of the worship of death as practiced in the Mexican tradition.

La Santa Muerte is, quite literally, death. This isn’t a nickname for a dark being. To worship La Sante Muerte, one is in essence sending their worship and prayers to death. Exactly what “death” means is up to you; whether it’s the end of life completely, or transference into another energy, all depends on your belief system. She is sometimes called the Saint of Sinners because as a deity she is truly neutral; she does not judge. Her official appearance is much like the Grim Reaper that populates much of pop culture, only death is a lady. The cloak, scythe, and skeleton are all fairly accurate though.

I didn’t come into this book completely blind. I had been introduced to the worship of La Santa Muerte through television and movies. Generally, there would be some tattoo found on a victim or some shrine discovered by a detective that would lead to an explanation that her followers were known criminals. I expected the text to try and gloss over or remove itself from this association but I was surprised that Prower not only admitted to it but expanded on it.

This isn’t to say that the worship of this deity is for criminals and very bad people. Prower explains right from the start that La Santa Muerte has followers from all walks of life because in all things she is neutral, which is a far cry from the usual depiction of her worship as being evil. She grants all prayers whether they be what common morality would consider “good” or “bad.” She doesn’t pass any judgements on the worshiper’s request.

The second surprise of the book is about the depiction of death; the cover illustration featuring the “traditional” death illustration is correct. This deity is portrayed exactly as she appears in pop culture, the only notable difference is that the classic image of death is usually understood to be masculine or male whereas Santa Muerte is without a doubt feminine or female. Although the text is very clear on this, her gender doesn’t appear to be important at all other than to help worshipers hold an image of her. Death as female seems to hold a stronger alignment towards creation, after all, she is your co-creator in what you hope to manifest, if you intend to use the spell book section of this text.

La Santa Muerte is divided into three parts: history and mythology, tools, and finally, the spell book. Each section is broken into various chapters that help build general knowledge around death as a deity and try to guide the reader in their own feelings surrounding the practice.

Prower takes a different approach to introducing this form of worship to the masses. Instead of starting the reader off with rituals mixed in with history, he instead gives the history, such as it is, right up front. With these sorts of books, I am used to diving right into the practice after a short introduction, however, Power spends the first two thirds of the text simply reviewing history, representations, and worship of La Santa Muerte.

Prower does this to show readers that this practice is not so far from what they may already believe, and although they may initially fear the worship of La Santa Muerte, the opening he provides helps to make readers more familiar with her various names and the ways that she manifests. Each devotee likely has their own special name for her but some of the common ones include La Dama Poderosa (The Powerful Lady), and La Flaca (The Skinny Lady). You can clearly see how different they are — one strong and sturdy, one frail and thin — as are the relationships that her followers have with her. For some she is aloof, while to others she is like an old friend.

During the first two parts of the book there are no real exercises to complete. There are a few meditation practices that invite the reader to reflect on what La Santa Muerte means to them, how they view death, and their reasons for seeking her favour, but beyond that, the text is fairly void of practice until you reach the spell book section. Usually this would be a negative point, as readers are generally looking for a text to help them work with a particular deity; however, in this case, it works very well because although there are a few established groups (for which contact information is given at the back of the book) this particular spiritual practice is very solitary and how each person chooses to worship is up to them.

This text is very inclusive. Prower goes out of his way while writing to ensure that no matter what the background of the reader, they do not feel put out by the text. He provides examples of the various types of people that come to her, showcasing that they really are from all walks of life. Her followers include people who consider themselves outsiders from the mainstream, but also people such as lawyers, doctors, and the like. Her worshippers are people who identify as Wiccan, Catholic, as well as other religions. This does not only cover faiths and class, but also education levels as well. In a few exercises, Prower encourages readers to respond in whatever language or style of language feels comfortable to them. This means that you don’t have worry about grammar, and slang isn’t a problem. It is not often that a book such as this makes room to acknowledge that not all readers come from the same background, and actively welcomes them to practice in whatever way feels comfortable.

This is Tomas Prower’s main point through much of the first two parts: there is no wrong way to worship or envision La Santa Muerte. Call her as you wish, view her as you wish. She will not judge you and will be open to receiving your prayers and wishes.

The spell work section of the book is equally as informative and clearly written. It is broken into types of magick, such as money, love, and even hexes (remember, La Santa Muerte is a neutral deity, and good or bad, it is all the same to her). Each spell is written clearly with in-depth and easy to follow instructions. This interesting and certainly useful if you are choosing to follow the practice, but the other sections of the book spoke more to me about who La Santa Muerte is and why you may choose her worship.

Overall, La Santa Muerte: Unearthing the Magic & Mysticism of Death is very easy to follow. It is well written and presents a wealth of information for the curious as well as those who are seriously considering becoming a devotee. If you are looking for a book as a reference for spells, then it can be used for that, but the text’s true merits are its rich and well thought out history, and serves as an informative guide to the worship and respect for Death.