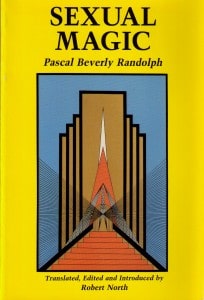 The show takes its name from the similarly-titled book Magia Sexualis (Paris: Robert Télin, 1931), which is attributed to American Rosicrucian and sex magician Paschal Beverly Randolph (1825–1875) and posthumously compiled in French by occultist and fellow sex magician Maria de Naglowska (1883–1936).  Over half a century later, in 1988, an English translation was finally published by Magickal Childe, Manhattan’s legendary occult bookshop on W 19th Street run by the equally legendary Wiccan High Priest Herman Slater.*

According to the gallery, “Sex magic (sometimes spelled sex magick) is any type of sexual activity used in magical, ritualistic or otherwise religious and spiritual pursuits. One practice of sex magic is using the energy of sexual arousal or orgasm with visualization of a desired result.” The Magica Sexualis exhibit showcases artistic explorations of these concepts.

Stephen Romano Gallery occupies part of a former warehouse space in an industrial-looking section of Brooklyn’s rapidly-gentrifying Bushwick neighborhood, just a stone’s throw from Knickerbocker and Flushing Avenues. Although the gallery’s address is 117 Grattan Street, its entrance is on the next block (Porter and Harrison Place), opposite the building’s Grattan Street entrance. A striking black-and-white sigil in the window indicates that you’re in the right place.

The gallery consists of three rooms, plus a window gallery, all of which hold pieces of the current exhibition. Entering the first room, one is greeted by the exquisitely subtle monochrome graphites, charcoals, pastels and acrylics of Los Angeles artist Jel Ena’s “Sanctum Infernum” series. Her work is strikingly detailed (I especially noticed her attention to lips); and her subjects, all female, are distinguished by horns or horn-like growths on their heads. Ten pieces make up this series, and while not part of the Magica Sexualis exhibit, they definitely set the tone and fit in comfortably alongside the six pieces dotted about the room that are part of the Magica Sexualis show. One sculpture — best described as a goat’s head with sex organs — hangs over the doorway to the next room, so when visiting be sure to look both high and low so as not to miss anything.

Entering the next room, one is immediately struck by the large canvas by co-curator Barry William Hale, who re-imagines Eliphas Levi’s Baphomet in vivid reds and pinks that skate the line between psychedelic and one of Deep Dream’s better sleeps. What’s not to like?

These and the other works in the show vary widely not only in their medium, but also in the extent to which their imagery is sexual, or esoteric, or both. Some, like Maria Kreyn’s untitled nude, are simply beautiful but have no obvious occult imagery. In others — like Stewart Farrar’s photo documentation of Janet Farrar’s initiation into Alexandrian witchcraft — the nudity is simply one detail of a symbol-rich rite of passage. Then there are pieces like Gemma Gary’s “All is One” which are strikingly occult but not so sexual. Meanwhile others are like Meesha Goldberg’s “Magus,” which mixes elements of cosmic auto-eroticism with tattoos of occult symbols including the TOPY Psychick Cross and Aleister Crowley’s unicursal hexagram. Finally, there are whimsical pieces like “Eye of the Beholder,” in which a muscular purple Cyclops tattooed with an anchor and “#1 dad” towers over a supine woman who is naked except for a helmet on her head. It is precisely this juxtaposition of the sexual and the occult, the quirky and the serious, which defines the overall theme and meaning of the exhibition.

The show contains over seventy pieces. Some are part of a series — such as Jane Cox’s Ceremony or, over in the window gallery, Barry William Hale’s Legion 49 Sculptural Series (3D realizations of his artwork for the acclaimed folio Legion 49, London: Fulgur, 2014) — and are listed as a single item on the gallery’s hand list. Many of the works are for sale, with prices ranging from $350 to $7,000.

Sex magic(k) traces its presence in the West through the teachings of figures like nineteenth-century Rosicrucian Paschal Beverly Randolph (1825–1875), sexual reformer Ida Craddock (1857–1902), and Oriental Templars Carl Kellner (1851–1905) and Theodor Reuss (1855–1923). In more recent generations we also find figures like Pierre Arnold Bernard (1875–1955), who introduced yoga to America in the 1910s; Edwardian occultist, poet and sex magician Aleister Crowley (1875–1947); the father of modern Wicca, Gerald Gardner (1884–1964); and ex-carney showman and founder in 1966 of the Church of Satan, Anton LaVey (1930–1997). The mingling of sex and ritual — or sex as ritual — has become common practice in occultism thanks to these people and those who followed them. This includes organizations ranging from Gardnerian and Alexandrian Wicca, Ordo Templi Orientis, Illuminates of Thanateros, Temple ov Psychick Youth, Church of Satan, and the Temple of Set, among many others.

While the Magickal Childe edition is long out of print, a new translation has been recently published as Paschal Beverly Randolph and Maria de Naglowska, Magia Sexualis: Sexual Practices for Sexual Power, translated by Donald Traxler (Rochester, VT : Inner Traditions, 2012).