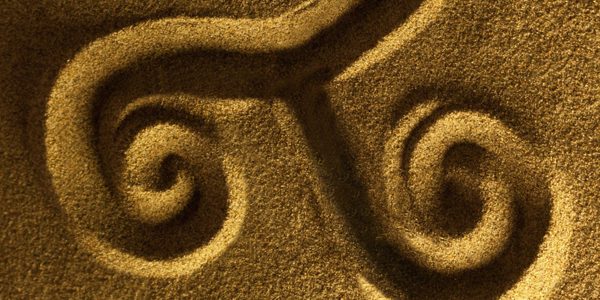 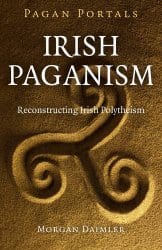 Irish Paganism: Reconstructing Irish Polytheism by Morgan Daimler is a slim volume — not even 100 pages — and a title in Moon Books’ Pagan Portals series. Daimler describes herself an Irish Reconstructionist with Heathen tendencies and more than 20 years of experience. She also speaks Irish Gaelic and has self-published a book of Irish language translations. The amount of knowledge and information she has condensed into one small primer is considerable, and she manages to stay approachable and easily accessible to almost anyone.

The text is divided into chapters covering the entire spectrum of Irish Paganism, including basics and beliefs; the Irish pantheon; rituals, magick and holy days; and a brief chapter covering “hot topic” questions a newcomer to the faith might run into such as issues of race, sexuality and cultural appropriation.

The backmatter is comprehensive and includes pronunciation guides for Modern- and Old Irish, which is very useful. Even for someone who has been interested in Irish history, spirituality and culture since her early teens, the pronunciation of native Irish words is not intuitive, so having the correct pronunciation handy for reference is a valuable resource. One quibble I do have is that while a translation guide is provided for the names of various myths, no pronunciation aid is included for them.

Irish Paganism refers to its myth titles — some of which are on the long side — exclusively in Irish. With no easy way to distinguish between them, understand their titles, or even gauge how they should be pronounced, it’s a writing decision that interrupts the flow of the text and may be frustrating to readers. I found myself skimming right over these titles without flipping to the appendix to see which myth was being discussed. In most cases Daimler makes note of these myths as the source of an example she’s discussing, so I didn’t lose a lot of context by not double-checking the English translation, but this became a stumbling block when I was reading. Of course any branch of Reconstructionist spirituality is interested in preserving and promoting the use of its primary sources, but in the case of a primer like this one, where a reader might be encountering the mythology for the first time, there’s no harm in making the source material as accessible as possible. And for the most part Daimler is careful and conscientious about that.

Indeed, Daimler’s tone can be characterized as conscientious. Reconstructionism is an academic approach to understanding and reimagining an ancient belief system through surviving primary sources like archaeology, folklore, mythology and historical texts.1 Evidently a pervasive misconception about reconstructionists is that they’re “mean” or “judgemental” towards newcomers because their methodology relies on research and critical thinking to recreate their spirituality and practices.

These notions are something Daimler addresses in her first chapter. She writes:

Reconstructionists aren’t out to make people cry, aren’t trying to recreate the Iron Age, aren’t only about reading books, and aren’t against personal ecstatic experiences or gnosis. What we are about is using solid academic evidence and personal inspiration to envision what that Polytheism would have looked like today if it had existed without interruption.2

If nothing else, the tone of her writing backs up that stance. There is nothing dogmatic about what Daimler lays out in this guide. She provides all the information a curious newcomer might need to begin their own study and practice, including an extensive bibliography and list of recommended reading. The same conscientiousness she applies in laying out the basics of Irish Paganism is also extended to her readers. Details on Daimler’s personal practices or rituals are only ever provided as example: they are one possible option or interpretation of the source material. They are never presented as absolutes, and Daimler never instructs or lectures. She allows readers of all backgrounds and experiences to approach Irish Paganism3 and respects their capacity to conduct their own research and come to their own conclusions.

Morgan Daimler’s Irish Paganism: Reconstructing Irish Polytheism is a great little guide to Irish Paganism. I’d give it an enthusiastic recommendation to anyone looking for a concise primer on the tradition, or to an experienced practitioner looking for a refresher on the basics. It is not the only title Morgan Daimler has written for Moon Books’ Pagan Portals series, and I am certainly interested in reading more of her work.