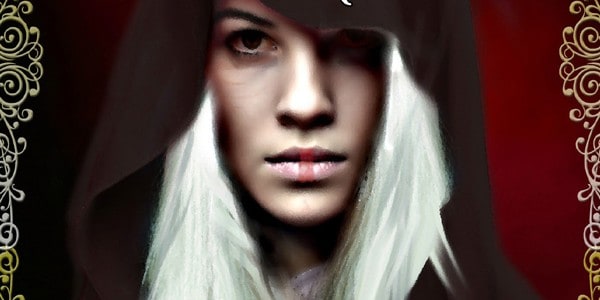 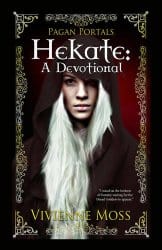 I must admit I picked up Hekate: A Devotional expecting a book about Hekate history, mythology, lore — and what I got instead was a devotional — a poetic, passionate grimoire dedicated to the chthonic goddess.1 The word “devotional” is in the title, after all, and it is an apt description of a very personal homage to Hekate.

Vivienne Moss has devoted her spiritual practice to Hekate, and that dedication comes through in every page. In a way it’s a difficult book to read, and also difficult to review, because both the writer and reader are likely to have intensely personal relationships with the goddess. It reads in a dream-like cadence, with visions, poems, and narrative elements interspersed. It’s precisely what the title suggests: a devotional text.

In reading the volume I began dog-earing pages with passages I wanted to spend more time on later, only to find I had dog-eared at least half the book! Passages that caught my attention were those with complex poetic images, challenging ideas about devotion to a goddess who dwells between worlds, and Moss’s engagement with darker elements: death and madness. I found it challenging to read as it does ask the reader to engage on a deeper than intellectual level, since so much of the text is poetry, or written in an intuitive style that doesn’t rely on clear narrative or communication of facts.

Vivienne Moss introduces herself as a cottage witch and a solitary practitioner. She practices, and worships Hekate in a chthonic tradition that honours Hekate as an earth goddess of the crossroads between this world and the spirit world.  Much of this devotional concerns Moss’ unique relationship with Hekate, letting the reader in on Moss’ lifetime of dedicated devotion to the goddess. One gets the sense that the book is equal parts a conduit to the energy and spirit of Hekate, and also Moss’ love letter to her. It’s very personal and often beautiful.

Moss is clear about the book being about a personal journey with the goddess, and a reflection of one woman’s relationship with Hekate. In her words: “Throughout these pages I will share my thoughts and feelings on Hekate, Queen of Witches. I know others will view Hekate differently. Some see Her as Soteria, the Savior and World Soul. I have a more organic take on Hekate. She is Hekate Chtothia (of the Earth), Nykteria (night-wandering), Antaia (sender of nocturnal visions), and Nerteron Prytanin (Mistress of the Dead). She is my Dark Muse, bringer of inspiration.”2

The book is relatively short at 96 pages, and the last 46 are comprised of lists of names, associations and spirit elements of Hekate. The brevity belies the intensity of the text — it’s simultaneously dense and also very poetic. The writer makes use of non-traditional capitalization for instance, as almost a dramatic device to emphasis certain words. For example, “Hekate sits upon Her Dark Through of Life and Death, wearing the Dream of Enchantment through the fabric of the Worlds.”3

This works from a dramatic and emotional perspective, but could be difficult for readers who prefer more standard grammar. The reader needs to attend to the text in a different way from other books as it lends itself to an emotional appraisal more than an intellectual one. There are factual elements toward the end of the volume, but they are mostly relayed in lists rather than a narrative. Given the intent of the book, the writing style seems very appropriate, but it might not be to the taste of readers who prefer a coherent narrative. Again: devotional, grimoire, not history or narrative of Hekate.

Although I consider myself more a fan of realist literature, (I would never ordinarily pick up a volume of poetry ), I found myself responding to the text. It is the type of volume one might keep and return to again and again, perhaps in meditation of a relationship with the goddess. I liked the focus on the chthonic elements of earth, death, divine madness, night flying and the dark elements of Hekate. Moss mentions, “There are those who belong in the brighter Summer-Lands, but others, like myself, feel at home surrounded by the grim shadows of the darker realms.”4

The chapter headings provide some sense of the content of the book, but given it’s poetic qualities, the text moves back and forth, and in effect the headings are more like interconnected meditations. At the end of chapter six Moss notes the end of the devotional portion of the book, and continues with chapter seven and eight.

Chapter seven, “Hekate — She Who Is All” provides a paragraph of the contested history of Hekate, and then fifteen pages of correspondences for Hekate, from alternate names for her, animals, herbs and appropriate offerings for her. In chapter eight, there is a wonderful chapter entitled “The Cunning Way” that provides a short but rich grimoire of recommendations for rituals that would honour Hekate. Moss discusses necromancy, night flying and artistic homage to Hekate. After a short conclusion she provides a list of recommended readings about Hekate that might interest readers.

Hekate: A Devotional took me a few days to digest, despite the fact it could absolutely be read in one sitting of a couple hours. It’s a short and challenging love letter to a goddess who looms very large for chthonic Pagans, and could be an excellent magical resource.