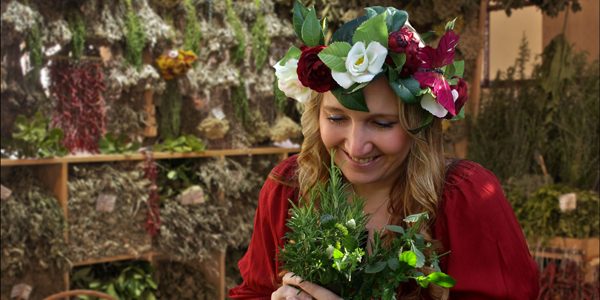 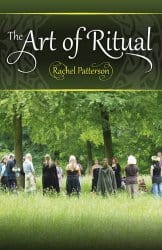 I really enjoyed The Art of Ritual, despite some criticisms. Rachel Patterson has created a wonderful introduction to ritual for anyone interested in Pagan tradition, whether or not they are Wiccan. Patterson is a high priestess of the Kitchen Witch Coven; an elder who describes herself as a Green and Kitchen witch. Her approach is non-prescriptive, supportive and encouraging of beginning practitioners to improvise and trust their instincts in the development of ritual.

The elements of a primer for basic rituals are all here: description and explanation of tools, suggested altar set up, cleansing and consecration, making sacred and physical space. The description and cataloguing of tools is great, and demonstrates Patterson’s incorporation of non-Wiccan Pagan traditions. For example, she includes horns for Viking ritual; sickles for Druid work; and a talking stick. These inclusions demonstrate that the book is meant for a wide audience and as such, is inclusive of multiple spiritual traditions.

She discusses the four elements at length, and includes a pretty comprehensive list of correspondences for each. So, for each element (air, water, earth and fire) she includes a list of associated elementals, colours, stones, planets, plants, crystals, directions, astrology, deities etc.; all of which are helpful to reference and review in creating a meaningful ritual for oneself and others.

The section titled “The Working” is relatively short. Described as “the part in your ritual when you do what you set it all up to do”– is woefully brief and nonspecific. The section provides suggestions but isn’t very explanatory in ways that novices are likely find helpful. Interestingly, this is something I have noticed in other books on the practice of witchcraft: so much attention is paid to the tools, clothes, setting, and the opening and closing of ritual; and much less attention seems devoted to the “work” of the ritual. This could be confusing for Pagans who are just starting their spiritual journey.

Patterson tells us that the work might be might be a spell, connecting with deity, performing divination, or meditation; but there isn’t much guidance that would help the novice design or create this work. More elaboration about how practitioners create and perform spells, or worship and make offerings to deities, or perform divination would be very helpful.

I started The Art of Ritual expecting a sort of “mix and match” ritual recipe book, which it isn’t. It’s not an especially long book, divided into ritual basics and then suggestions for creating ritual. The first section allows the reader to take a creative view of ritual as an “art“; then the second section seems to almost circumvent that creative process by outlining specific rituals. It’s as though the first section gives the reader the tools, and the second section gently relieves the reader of the tools, and starts the art making without further developing the reader’s creative ritual skills.

The second section is credited in part to Patterson’s coven mates, which is slightly awkward as it introduces many names (and actually, entire scripted rituals attributed to other people). I understand this is necessary perhaps to underscore the idea that the rituals presented are collaborative efforts, but adding the specific names of the coven members is distracting. The reader is left out of the script, after gaining inspiration and confidence for ritual in the first half of the book. The cover of the book is a photograph depicting Patterson’s Kitchen Witch Coven, and while this is a lovely tribute to her group, it’s not really a photo this reader can relate to, or imagine themselves in.

The suggested rituals presented include “rites of passage” and the Wheel of the Year to honour the seasons. The rites of passage section has some examples which are great: the initiation, dedication and naming rituals for example. Others aren’t as inclusive for many ritualists — the “menarche” ritual for young women and the “coming of age” ritual for young men are gendered in a way that will likely alienate many readers who will rightly observe that not all young women menstruate; menstruation may have nothing to do with “coming of age”; the idea of “coming of age” is ambiguous at best; and both rituals ignore non-binary gendered ritualists. Additionally, the suggested handfasting ritual also seems entirely heteronormative in its construction.

I enjoyed the Wheel of the Year section. The discussion of the Pagan year and the seasons with suggestions for celebration. This information is familiar from many other sources. Here, Patterson describes each season, suggests possible ways to celebrate with a ritual, and includes a script or a written ritual created by a member of her coven. I felt the specifics of these scripts might discourage readers from improvising their own ritual wordings; but I appreciated her inclusion of a Saturnalia ritual, a Faery midsummer ritual, and esbat celebrations to honour moon phases ritually.

My main issue with this book is that I felt the incorporation of Patterson’s coven mates made it feel less like a solid reference book and more like a grimoire for her coven. I felt that the volume presented excellent information at the start to get practitioners thinking about the flexibility of the ritual structure, then the specificity of the examples provided sort of stopped the creative flow. If the book is intended for a beginning ritualist, perhaps providing a blank template would prompt the reader to design their own specific ritual for solo or group use, rather than providing the rituals and words used by Patterson’s coven.

The book isn’t really about how to create ritual, although the first section is very promising toward that end. I felt like the second section effectively took the reins from the reader and left them without much in the way of how to write and perform an effective ritual. I grew up attending Catholic Church, and subsequently saw parallels in Pagan ritual production with what I had observed as a child in Catholicism. From both of those perspectives, I see ritual as a type of spiritually charged theatre. As such, there are many elements and moving parts to attend to, the combination of which can be very overwhelming to novice (and experienced!) ritualists.

I have learned the most by attending rituals, and observing the rhythm and structure of the experience. I think a book about the “art” of ritual would do well to break down the elements on a deeper level. Discussion of the tools and the altar are in every book on witchcraft that I own; what would be different and very valuable is imparting the skills that would encourage ritualists to begin to design their own rituals. Especially for solo practitioners, this would be wonderful!

I would love to see a book that actually provides inspiration for ritualists to write their own ritual. Looking at ritual as an art is an excellent start, but I think the idea could be taken much further. Creating parallels for the reader with respect to how art (writing, dance, music, visual art creation etc.) can be transformed into ritual would be excellent, and provide the reader with a “way into” the fascinating art form of ritual. The Art of Ritual is useful, and contains a comprehensive overview of the basics; it just didn’t take the promise of its title far enough for this reader.