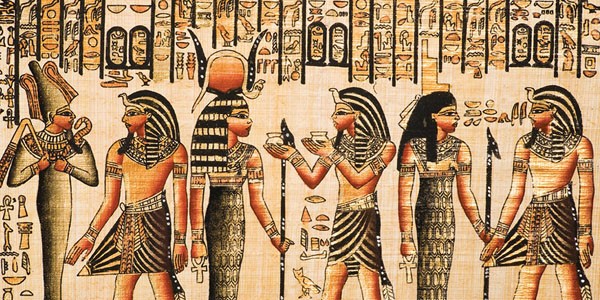 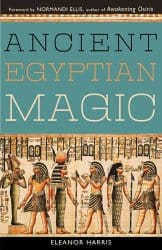 Ancient Egyptian Magic is organized into six chapters describing ancient Egyptian philosophy, ritual tools and garments, amulets, writing, divination trance work, and using words of power. There is a glossary of deities and terms, along with a list of resources for more information for specialty items to outfit the detail-oriented magician.

With a clear respect to the people of ancient Egypt, Harris provides many spells translated either fully or partially from the Leyden Papyrus, Book of the Dead, and the earlier Coffin Texts and Pyramid Texts. There are three take-aways from this book: first, upholding Ma’at is necessary to keep the homeostasis of our lives, communities and whole planet from slipping into chaos; second, morality is not simple, but rather contextual; and thirdly, words are the ultimate power, and whether spoken or written, thereof make a potent spell. From shape-shifting into animals and gods, to spells of lust, or execrations of enemies, all the details for preparation, context, and ritual action are provided for the reader. Harris clearly describes how one uses the tools, makes them and why they are important in the rite.  She imparts both esoteric and mundane aspects of heka with skill.  From the preparation and construction of ritual tools and amulets, as well as the esoteric and cultural stories to the more abstract topics like Ma’at, words of power, and dream divinations, Ancient Egyptian Magic covers a wide range of information and in varied writing styles. Harris clearly uses the power of words to inform the reader.

The use of obscure items and ancient techniques reminds the reader that in dealing with Egyptian magick; we are dealing with a culture and time different from our own. Harris’ specific instructions make it easy to follow the old spells, even if they seem arbitrary. For example, one peculiar instruction is to sit on a new brick while scrying in an oil lamp, also atop a brick. A lovely and earnest ritual act is to sprinkle water on the floor when welcoming both visitors into your home and the gods into your sacred space. Also included is a discussion of the nine physical, emotional and ethereal  bodies each human possesses and the esoteric Ape of Wax Spell, designed to grant you success and good luck in your ventures, and in which you transform one of your astral bodies into an ape to meet with Tehuti (Thoth).

When ritual tools are taken up, Harris includes their context, their place in mythology, and their use in magick. These tools are specialized compared to those used in modern magical practices, and if the reader wants to use tools, recreating them will be enjoyable with the right amount of challenge. While Harris informs the reader that the acquisition of these tools is not totally necessary, if the magician wishes, building your magical tool-box should be a simple enough quest.  Harris provides some resources for gaining either materials or ready-made versions to purchase in a section devoted to Egyptian resources.

To fully appreciate Egyptian magick, and not just this book, one must understand the concept of Ma’at, the personified goddess of divine order, whose invocations should ensure that the world does not spin into chaos. Oftentimes, Ma’at is visually represented by a scale with a feather and is the opposing force to chaos, which the ancient Egyptians saw as a constant threat.  ((Ian Shaw, The Oxford History of Ancient Egypt (Oxford, 2003): 269.)) For those who practiced the magical arts, Harris uses the terms hekau and magician, although the term sau is sometimes used in the ancient texts. It has the same root as amulet, “sa,” which may be indicative of either what the magician does or makes.

Sau could be part of the priesthood or laymen, noble or not, as almost anyone could practice magick in ancient Egypt. Though due to their office, the pharaoh was considered the most powerful magician of all. One’s ritual purity goes along way in how powerful a spell is, and words of power coupled with ritual cleanliness can negate the need for tools and props if wished. Upon initiation into priesthood one chewed natron and breathed in incense, was circumcised, and had to clip their finger and toenails.  Shaving all body hair was also necessary for priests.    Since priests were not the only ones who practiced heka, it may be that all that is unnecessary, but adds power.  In addition, certain foods and sexual acts could make a hekau impure for a specific ritual, in or outside the context of priesthood. I suspect, that in antiquity, in lieu of being a priest, the tools are what allowed the magician to access the magical realms. The priest,  having already undergone a standardized purification ritual, entered into a separate and not necessarily “magical” class and therefore retaining their power and influence on Egypt’s agricultural, civic, and legal systems. While Harris is sure to present this work as a secular approach to magick, a religious aspect is always present in the magick by virtue of the names of the gods and the ritual aspects. Even though deities are invoked, there is less magick surrounding the actual deities than just using their names as words of power.

Sau were not above “tipping the scales toward chaos to achieve a magical aim” in which we see a truth the Egyptians knew — that it takes many points on the spectrum of magick to make this world function. Harris describes ancient Egyptian magicians as “fighting fire with fire”1 and that is certainly a fair assessment. She phrases the concept thusly: “ultimately it is your conscience that must decide how you use magic.”2 Throughout any magical practice we must choose the right magick for the right scenario, for the right reason, for the right order.   Ma’at is in constant flux, making the magician’s choices fluid and context dependent.

In ancient Egypt, sau did not cast circles in which to work magick. As mentioned, the purity of the magician and use of words of power creates a space suitable for magick. The repeating of phrases, paragraphs, and pages of words serve to affect the sound waves in the space around the magician and to deliver the magician’s mind into the correct realm or state for performing the magick. Many texts are meant to be read in a “bellowing voice,” and Harris describes this as using deep breathing with elongating the vowel sounds and clearly enunciating the consonants. Words, whether written or spoken, were considered one of the highest form of magick in ancient Egypt, and Harris shows this through the long passages from the old papyri. In my personal practice, in Kemetic reconstructionism, I have found this to absolutely be the case. Both translated and untranslated liturgies, prayers, and spells I use are most powerful when enunciated deliberately and slowly and repeated until memorized. It is then that the words act like a pathway into the realms where we work magick. This was of the utmost importance since the priest is what makes a space sacred, though his words and presence.

Ancient Egyptian Magic reads comfortably, while allowing an easy progression of the nuts and bolts of ritual tools to basic mythologies and magical philosophies. This book is great for a new student of ancient Egyptian magick — or any tradition which makes use of it — though maybe not someone new to magical thinking and practice. While Harris does not frame this as a book of Kemetic heka, it does provide examples from the archaeological record from which the reader can reconstruct tools, crafts, clothing and cosmetics.

I am however a little concerned of her over use of E.A. Wallis Budge as a reference for mythologies, translations, and interpretations.  His work, while widely and freely distributed, is considered outdated in our current understanding of Egyptology.  Much of his work contains what we now know to be mistaken translations and interpretations based on his own religious understandings.  Harris does also reference Robert Faulkner’s translations which are more recent (1960s) and accurate, though these are far less in number than her references to Budge.  The original edition of Ancient Egyptian Magic was published in 1998, and it would have been nice for the updated edition to have some new references, or resources since many more are now available to the public.

While Harris covers spells of wax, divination techniques, and meditative tools, these are mostly sourced from the Leyden Papyrus dating from the 3rd century CE, dating the book from the latest periods of Egyptian magick which was influenced by Roman and Greek magick of the time. If this book peaks your interest in the magick of late antiquity, also check out Stephen Skinner’s Techniques of Graeco-Egyptian Magic,3 a wildly in depth and cataloged read.

Ancient Egyptian Magic provides a place to get started with divination, spell casting, and dressing like a sau. It serves as a grounded, secular approach to ancient Egyptian magick, and it encourages an understanding of many modern magical practices.