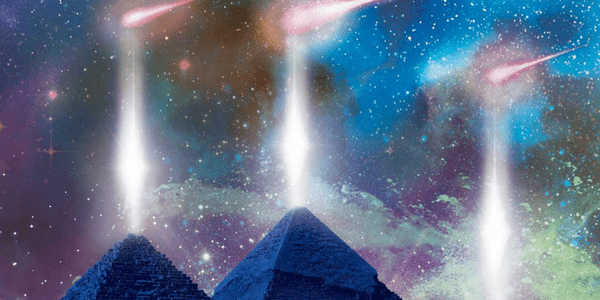 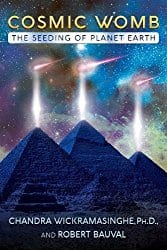 In order to dive into this book, one must first put aside every preconceived notion they have about the universe and our place within it, and be prepared to enter a whole new paradigm that completely turns all we have thought upside down. Anyone familiar with the work of  Chandra Wickramasinghe, director of the Centre for Astrobiology at the University of Buckingham, may already be aware of the “out of the box” scientific proposals his research has uncovered, much to the disease — literally — of the scientific community. Together Wickramasinghe and Robert Bauval, an expert on Egyptology, have combined their life’s work to synthesize a revolutionary perspective on the origins of human life. Through the interweaving of their work, Cosmic Womb: The Seeding of Planet Earth makes an intriguing case that life on Earth has come from advanced civilizations somewhere out in the cosmos. Using data they have collected, this book sets out to revolutionize the fields of science, history, and cosmology in one fell swoop.

The book is divided into two sections; the first section is written by Wickramsinghe, and the second section by Bauval. In the first section, Wickramasinghe reviews his work contributing to the theory of panspermia. Panspermia, a theory originally developed by Fred Hoyle — who was a close friend and mentor to Wickramsinghe — is the idea that life on Earth originated from microorganisms from space. According to the theory, microorganisms travelled to this planet on comets and found a suitable biosphere to evolve within. It was from this origin that life on Earth developed to eventually become the human beings we are today. Wickramasinghe’s extensive background in astronomy lends to a well thought out explanation of how this is possible, and ample scientific theories are used to support his claim. Through examining the connection between our cells, bacteria, and astronomical happenings, such as comets and meteorite showers, the theory developed by Wickramasinghe creates a web that links all the pieces together. His careful analysis of theory and data showcase how it is more than evidently possible, according to the research presented in the book, to have evolved directly from the dust of space teeming with microorganisms. The topics covered in this section span a wide range: the history of panspermia, the role religion and science play in consciousness, the search for alien intelligence, and quantum physics ideas, such as a multiverse.

The second section of this book focuses on the work of Bauval’s findings on the Pyramid of Giza. He has published his findings that the three pyramids of Giza line up directly with the stars of Orion’s belt. Denouncing Egyptologists for their narrow, rigid view of the pyramids as solely a burial tomb for the pharaoh, Bauval attempts to bring a new perspective to the implications of the model and use of the pyramids of Giza.

This section of the book outlines the mysterious universal forces that were at work that led him to his discovery. There is an application of the concept of synchronicity at play that points to a higher intelligent design of the Universe, that Bauval terms “coincidence pigeons,” pointing to inexplicable events of connectedness that cannot simply be written off as chance. He uses a multitude of examples of numbers related to both sacred geometry, reflected in pi and prime numbers, to build a foundation for promoting maths as the language of a higher intelligence. By examining theories of physics, maths, and architecture, Bauval paints an entirely new perspective on the purpose of the pyramids. And, in examining the geographical coordinates of the pyramid and the language of the numbers associated with foundational mathematical numbers, the section demonstrates that the purpose of the pyramids goes beyond it being simply a tomb. Whether it served as proof of contact with a higher life form, demonstrates a connection to a realm of consciousness beyond our ordinary state, or holds the key to other life in the cosmos, the pyramids remain a mystery that has yet to reveal itself to us.

I have to be honest, it is difficult to fully open up to this book as it reeks of all things conspiracy theory — CIA cover-ups, searching for alien life, a denouncement of scientific community with a bold claim that the truth lay within these pages. To add to that sentiment, while it is evident Wickramsinghe has an extensive educational background, much of the pieces of evidence cited come from his own work, which lends to bias and the other referenced scholarly studies had methodologies that seemed questionable. Throughout the book, studies were referenced without title or detail — rather than explanation of the results. This lack of citing was a red flag to the validity of material presented.

There was also a lack of continuity between the two sections of the story, which seemed to fit together only loosely. Most of the information presented in both sections is a myriad of hodgepodge of scientific theory. The book covers so many scientists’ work; so many different theories, from Buddhist reincarnation to existence of Asperger’s savants, it can be a challenge to see how it all fits together. The different topics are a bit scattered and random, lacking a clear centrally-defined thesis. Some of the scientific literature used in the book is either watered-down or used in an overarching manner to explain how these theories could be possible. The blanket of these huge theories is then used alongside very detailed and technical math that the average person would not be able to comprehend. Therefore, the mix of vague theory and complex maths seem to distinguish the evidence provided in the book as credible.

I am not totally denouncing the book, because I truly had some “aha” moments of inspiration in regards to how we think about these things, which led me to do some of my own research. It presents a tonne of scientific theories, discoveries, and scientists which served as a base for me to explore further when reading. The time and consideration that each author has given to the subject is quite clear. However, despite their academic credentials, I would say there are a few holes in the book that make it difficult to readily accept the notions put forward.

In the end, Cosmic Womb offers a few far out explanations for how the math of the pyramids may reflect a connection to a higher intelligence, and this theory is seemingly backed by Wickramasinghe’s idea of the cosmic origin of life being in space. Rather than take a specific stance, the material in the book opens the doorway of possibility for a few theories. It was in some ways admirable how the authors do not try to force one conclusive result from their collaboration, but rather present a few possible explanations for ways the work could be interpreted and researched further. This work remains on the forefront of science, and it is a possibility that as more research is done, this book could become a ground-breaking work, laying the foundation for new academically accepted theories to emerge; reframing our place in the cosmos, and in turn redefining what it means to be human.

For anyone who has an interest in the natural sciences, cosmology, and alien life, I would highly recommend Cosmic Womb: The Seeding of Planet Earth. Those who are open to an alternative reality from the norm will have much to take away from reading this book. While it can be a detailed read at times, with complicated mathematical figures, the authors do a great job of explaining science in a way that someone with little background can understand. It could be a mental exercise to stretch the limits of possibility to expand what our minds can encompass — this book does just that!