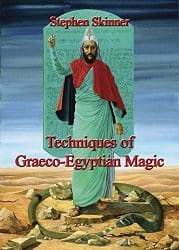 Techniques of Graeco-Egyptian Magic exhibits a soft spot I have for magick: the academic approach. This Ph.D. paper by Stephen Skinner is the latest of the his many works on the Western esoteric tradition, in addition to many books on feng shui. His clear grasp on the historical data and his academic lens make this paper-turned-book a highly educational though sometimes mundane read. There is no fluff here — just facts, charts, and the occasional historical backtracking. Yet, Skinner’s painstaking translation, organization, and interpretation bring to light many long-standing traditions’ origins in the magick of Late Antiquity. Skinner describes a snapshot in time when magick held reverence as part of a tradition tied to the mystery cults and religions of the day.

Skinner analyzes a collection of texts, including the Papyri Graecae Magicae, (known as PGM throughout the text and furthermore in this review) originally written over the time span from about 320 through the 5th century CE, and first translated into English in the 1930s. Within the PGM, Skinner identifies 28 types of magical techniques or rites, totalling 134 individual compositions. This text serves as the main body of analysis, though Skinner’s extensive references to other works by John Dee and Aleister Crowley, the Hygromanteia and the Clavicula Salomonis among the European and Latin grimoires may be more familiar to the well versed in the occult reader. Newcomers to magical practise will find some of the references obscure.

Skinner organizes the historically haphazard PGM to determine cultural influences, magical types, uses of techniques, gods, daemons, or correspondences in Graeco-Egyptian magick. His thorough study of the text provides truly useful charts denoting everything from hours of the day relating to animals, gods, stones, and so on, to lists of amulets both generic and with clients’ names built into the instructions. This last category brings a real human aspect to the highly stylized and ritual magick described in the PGM. It is analogous to finding ancient pottery sherds with a human fingerprint still visible in the ceramic. Uncovering this kind of detail brings reality to magick almost 2000 years old, grounding it in the daily lives of magicians and clients alike.

Careful attention to the original Greek headings, in addition to Skinner’s cataloguing of deities, daemons, angels, and magicians’ names invoked, plants used, and even vowels uttered, clearly shows that the magick in the PGM derives from a few distinct sources. Egyptian and Greek contribute heavily, but Jewish, Christian, Babylonian, and some minimal Roman sources are evident. One of the most striking observances from Techniques of Graeco-Egyptian Magic is the great amount of magical eclecticism. For example, Skinner includes a reproduction of an amulet inscribed with a Greek translation of Jewish liturgy, from the first or second century CE from Wales. The geographical and ideological distance between Welsh, Greek, and Jewish practises was apparently not as vast as the magick shared in common. I liken this to modern eclecticism, where a practitioner may use a Wiccan circle casting, evoke Greek gods and proceed to perform a tarot divination. Skinner shows that magicians throughout history have always looked back on previous traditions to lend credence or inspiration to their magick. In addition, they were not averse to sharing customs from outside their own magical culture.

The traditional magician will also find gems of information in this book . Filled with snippets of original text, herbal correspondences for ingredients like “blood of Hestia” and “snake’s ball of thread,” Techniques provides a plethora of historically used methods in their precise context. Practitioners in Ordo Templi Orientis or Gardnerian Wicca will also see roots of their tradition sprinkled throughout the text. Such recognizable practices as the drawing of blood to attract spirits and wielding a sword in the magical act, also feature throughout the PGM. In addition to these, Skinner reveals nomina magica from many traditions still in use today.

Whether eclectic or traditional, this is not a beginner’s book of understanding magick, unless one is already student of the history of magick. Any practitioner with an academic leaning will easily harvest a deep and comforting context for their magical work.

Skinner falls short of listing full rites or methods, glossing over most of the original text, instead providing his summaries. I suspect that due to the academic focus of the paper the full listing of each spell would be unnecessary. Also many of the procedures involve outdated and outlawed acts (ritual drowning of animals and digging up of bones, for example). I commend Skinner on not only his thorough translating of ancient Greek, but the cunning parsing of such nuanced terms as “amulet,” “talisman,” “charm,” “spell,” “rite,” and “ritual,” which in Late Antiquity held precise meanings. The glossary of Greek words in the back helped greatly with words that hold no direct English translation. A well-chosen index makes referencing simple, though the list of tables hold the key to finding some of the most detailed information. This study will be at home on any shelf next to other academic texts and historical references related to magick.

I greatly enjoyed reading Techniques of Graeco-Egyptian Magic, though t 388 pages (including index and glossary) it is not a quick read, but it well worth taking time and notes to glean some truly unique discoveries. It showcases the actual magick used in Late Antiquity in all its nuanced glory. Thanks to Skinner’s analysis I have gained a new insight on the way real humans interacted with magick and how that in turn, continues to shape the course of modern magick.