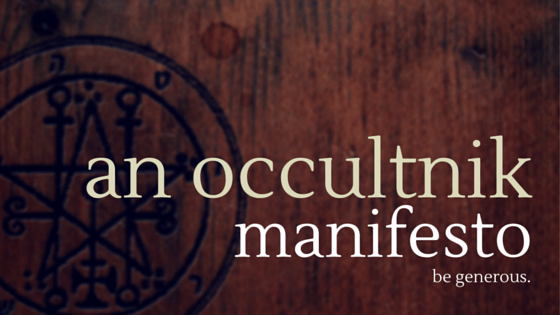 I’m a member of a Facebook group that celebrates the work of Andrew Chumbley, and recently some magicians on the group were making fun of an occultist for selling t-shirts that referenced his work. They derided it as kitschy, declared that it somehow denigrated the kind of traditional witchcraft Chumbley advocated for. But that’s not how I saw it. Had it come in my size, I might have purchased it. On a dark blue background it might have made a spiffy tee.

I’m a freelancer. Most of the time I work at home in my PJs. The rest of the time, when forced to venture into the world, I prefer to dress casually in jeans and t-shirts. I’d totally wear a t-shirt with artwork from the Azoetia. I have an oversized shirt covered with sigils from an Austin Osman Spare exhibition from the ’90s. Spare’s work means something to me, and his ideas are reflected in my practice. I only wish that the tee was smaller and better fitted to my form. I’ve also got a dress that I’ve yet to find occasion to wear that’s covered in images of Aleister Crowley. I love this stuff. To those who are unfamiliar with it, it might just look like a nifty design, to those in the know, it’s a sign of recognition of a fellow occultnik.

When I was a teenager I used to wear a small pentagram necklace for this very reason. Sure, the occasional person asked if I was Jewish, mistaking it for a Star of David, but others would smile and greet me with a “Merry meet,” and we’d chat. Apparently the modified chaostar signet ring I sport these days is less obvious, but it still serves as an invitation for communication for those who are interested.

I wanted a cute name that referred to these subversive interests. “Occultnik” includes not only those who would describe themselves as occultists, but also Pagans, witches, Wiccans, Thelemites, Satanists, atheists, magicians, sorcerers, wizards, unicorns, and what have you. To my mind, anyone with an expressed interest in any of these subjects is an occultnik. Someone interested in occulture, the weird practices we get up to and the cultural and sociological history that comes with it.

Each occultnik comes to occultism with varying degrees of practice and commitment, and that’s ok. When we support each other, and offer one another avenues for further exploration, we enrich our collective understanding and practice.

Attempting to “correct” another’s practice is condescending, but sharing its history, where it comes from, and examining how it got to the place it is today — that might be fascinating. Or not.  Is it really our place to judge?

Revel in the recognized

As occultists, many of us notice magical connections in the mundane as a matter of course, and for some, there’s a jolt of excitement. Whether it’s Thelemites getting giddy every time Aleister Crowley is mentioned by the press, or the knowing nod every time William Burroughs‘ 23 enigma is raised.1 I know at least one prominent occultist who tracks every media appearance of a particular tarot deck.

For some, it’s akin to trainspotting, catching every reference, and the sense of satisfaction that comes from being a part of that inner circle.

When people get excited, don’t hate. Instead, be generous. Share the connections you’ve noticed too.

The pop culture nods to our practices are all well and good, but it can be even more meaningful when we dig deeper, and take a look at what that nod actually connotes, or how that nod matches up with our lived experience.

These are the kinds of questions I’m most interested in seeing answered. Not necessarily definitively, but as avenues for exploration that can reveal fruitful things about occulture and the larger culture with which it cohabits.

J Simpson‘s piece, “An occult look at The Possession of Michael King,” looks at a recent horror film, how it references demonology, and how compares it with his own experience. Meanwhile, Cat Vincent‘s essay on the first season of True Detective2 considers the occultural influence, including the Yellow King, first written about by Robert W. Chambers. Spiral Nature‘s archives are full of this kind of deep exploration of occulture.

More and more of our peers are trying to make at least a portion of their living through their work. “Do what you love” has traditionally been bad advice (especially when taken alone). That said, if we take a shine to something a fellow occultnik is doing, why not kick a few bucks their way?

If you can’t afford to support creative and enterprising occultniks financially, you can support them in other ways. Leave favourable reviews on Etsy or Amazon. Share their work with other like-minded individuals. Send them an email to let them know you appreciate what they do and how they do it. Confidence boosters can go a long way too.

Our peers are doing some pretty amazing things. They’re writing books on innovative topics, digging into the history of little known practices, and sharing what they’ve discovered with the world. They’re taking inspiration from occulture and incorporating it into their poetic work.3

They are also creating dolls that can serve as spirit vessels.4 Others are making tarot decks and oracles. Some make occult art, or jewellery, and a host of other material things that are worth checking out.

Celebrate the creative works of our fellow magicians, sorcerers, witches, and occultists. It’s important to keep in touch with what’s happening in our weird little community, and honour each other’s successes.

I love it when people get excited; it means they’re passionate about something.

I know, I know. All chaos magicians used to be assholes, and the slightest hint of nerdery would send people into a trolling frenzy.

But the new generation isn’t like that. Instead, the overarching trend is towards sincerity.

Be genuine. Care about stuff. And share what you love. Invite others to love it too. We’ll all be better for it.