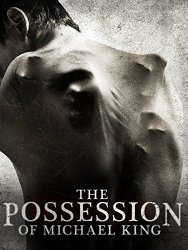 The Possession of Michael King is a found footage horror film. It follows the titular Michael King (Shane Johnson), a bitter atheist who, following the tragic death of his wife in a freak accident, sets out to make a documentary disproving the supernatural.

“The cameras will be rolling on me, 24/7,” King says in the prologue, “In the hopes that, if I encounter anything, anything at all, I will have found the first ever documented proof. I’m the testing ground — me, Michael King. So God, or the Devil, if you’re out there, prove it. Come and get me.”

Things quickly take a turn for the sinister as Michael King tumbles down the rabbit hole of the dark arts, leaving sanity and consensus reality behind.

King puts out an ad on the Internet looking for claims of the existence of the supernatural, which puts him in touch with a wide array of nutters and serious occultists in the film’s strongest segment. He first visits a dying exorcist who recounts a chilling tale of childhood sexual abuse. Seems he had a sneaking stepfather who would visit him night after night. The young boy would pray to God to intervene, to stop his suffering, but he never did, so he began to pray to the Devil, claiming he would do anything to stop the abuse. Shortly thereafter, the stepfather dropped dead.

King, ever the skeptic, claims sympathy, but asks how the exorcist knew it wasn’t just a coincidence. “Because,” the exorcist replies, “I began to hear him. Calling out to me. When he calls your name, don’t ever answer, because then he’ll know you’re listening, and he will never let you go.” This vignette is just a slight taste of the sound metaphysical advice that occurs around the margins of this marginalized film.

Michael King continues to use himself as a testing grounds for hardcore ritual, from Satanism to necromancy, predictably resulting in his being inhabited by a demon, Bahamgore, “Commander of 37 legions,  seeker of the defenceless, the weak-spirited, the non-believer. Known also as the destroyer of thought, breeder of ants. stealer of children. He comes, accompanied by the sound of cacophonous music, staying with the conjurer until tormentum un dementia.” (Tortured unto madness.)

From here on out, it’s a pretty connect-the-dots kind of scenario, as the demon begins to possess King’s body and strip him of all that he loves, ultimately seeking to claim his young daughter, his pride and joy, the unbearably precious Ladybug.

While the film may be too predictable to feel legitimately horrific, it is a damn fine horror film, with plenty of occult trappings and gritty, macabre ambiance to keep the horror devotee going. And while we may have seen things like this before, like when the demon begins to use King as his rag doll, throwing him around and forcing him to carve an inverted pentagram into his chest, still — you know this is one bad mother, and all hope for King is mostly lost. It’s chilling and kind of hilarious when King tries to train himself as an exorcist when it’s far, far too late.

While the ending may be somewhat predictable, especially considering the origins of the idea in the first place. Filmmaker David Jung had the thought of making a movie like The Shining, that showed every step of the progression into madness. So while we’ve seen the mad ogre father before, this performance by Shane Johnson shows why this movie is worth seeing. Johnson’s possession is full-blown body horror, where the actor switches between looking like a puppet, with its strings being jerked, and a wild, bloodthirsty. The image of a father scenting the breeze like a bloodhound, hunting his own daughter, is particularly unnerving and bestial. Only a last minute intercession, by the forces of faith, allow King a chance for final redemption — the closest approximation of a “happy ending” this film is capable of.

The Possession of Michael King received almost universal disdain from the critics, with Roger Ebert claiming the movie “goes through all the machinations of a found footage possession film with about as much creative spark as an apathetic teen checking off a list in a film class that he hates.” While it is true that the film could be read as a laundry list of found footage horror tropes, this overlooks the film’s charms. Yes, perhaps it does rely on volume-controlled jump scares, and, yes, perhaps Michael King’s insistence on filming everything as he plunges into the shadow realm does stretch the suspension of disbelief a bit thin, but the film is swathed in a sinister, menacing atmosphere, which is driven home by a truly arresting performance by Shane Johnson.

Critics love to hate horror films. Genre works are very rarely taken seriously. But for those of us who love horror, that get off on the pitch black ambiance, the titillating presence (or absence) of the supernatural — for those of us that get giddy seeing Baphomet or the Necronomicon on screen, The Possession of Michael King yields deeper rewards.

One reason for the continuing fascination with horror is the possibility of the supernatural. We’re willing to brave cursed mansions and blasted landscapes for a glimpse of the sublime, even if we risk eternal damnation to do so. And for many of us who were not fortunate enough to have been raised Pagan or in some Thelemic cabal, our first introduction to the metaphysical is often through pop culture, be it film, fiction, music, or comic books. It is in this regard where The Possession Of Michael King truly shines, as the film features some of the most authentic ritual captured on camera this side of a Kenneth Anger film. It serves as an outstanding cautionary tale, an illustration of metaphysical practices, and their possible ramifications.

As King throws down the gauntlet, taunting and mocking infernal powers, he visits a number of practitioners of different faiths. One of the film’s most effective moments is when he subjects himself to a Satanic ritual, high on LSD-laced grape Kool-Aid. The demonologist gives him the low down on what’s about to go down:

There are two prevalent methods for summoning demons. The first is by offering the demon something up front: a human life, continued servitude, your own soul. I don’t recommend those paths as, once performed, they’re very hard to undo. The second path entails creating the kind of frenetic atmosphere demons are drawn to: chaos, blood, sex, violence.

The Satanic ritual that follows is one of the most realistic, and crazy, I’ve seen on film, and the scene as a whole could serve as a primer on modern magick 101. You’ve got the drug-fueled gnosis. You’ve got automatic drawing. You’ve got sigilization, and charging that sigil with sexual fluids. For somebody looking for a very basic, “I want to work my first magical ritual, what should I do?” I would probably show them this scene, to start. (Hopefully wouldn’t scare them away for good.)

The necromantic ritual is even crazier, and has Michael King smoking DMT in a graveyard with a dead man’s teeth sewn to his belly, intended to lure the man’s spirit into King’s body. That’s some pretty witchy stuff! And I was also glad to see some necromancy of film, as it is often overlooked and ignored in the canon (which is touched upon in the film).

Lastly, the main reason why this film is important, apart from being an enjoyable horror film, is to serve as an illustration and possible visualization about what mucking about with the dark arts can do, especially when you have absolutely no idea what you’re doing.

While The Possession Of Michael King gets blatantly supernatural pretty quickly, there is a brief period where you wonder if he is just flipping out and going crazy. The jury is still out as to what exactly ghosts, demons, angels, and elementals are, or if they even exist. In my personal opinion, you don’t even have to believe in the objective existence of such things to still make an effective mage.1  Because while they may or may not exist in molecular reality, they definitely do exist in the realm of the mind. They exist if we make them exist, and they have power if we give them power.

There’s no telling if invoking demons is just summoning the darkest parts of our selves, looking at the ugly bits that are already there that we don’t like to admit, or if we’re opening a portal to some infernal dimension. There was a period in my life when I was much more glib about such things, stapling Goetic circles of evocation to my bedroom walls, and hanging out with people who were openly practicing black magick. While I cannot comment on what effect those experiments and negative vibrations may have had, I can say that almost that entire group of friends, myself included, either went crazy or went to jail, or some combination of both. There were maggots in the kitchen, and bats in the living room. A cat was hung from the neck. Churches were robbed.

Make of all of that what you will, but I think it’s safe to say that not much good came from out of all of that darkness. This is no moralistic jingo, however. This is merely a friendly reminder, courtesy of Shane Johnson and David Jung, to be careful! To look into what you’re playing with. Not to be so glib and dismissive. Rituals create a potent subconscious atmosphere; seeds are planted in the deep dark. Everything you do on this Earth, and beyond, has an effect, and the mind, heart, and spirit are particularly susceptible.

Have you seen The Possession of Michael King? What did you think? Did your first introductions to the occult came from horror movies and books?