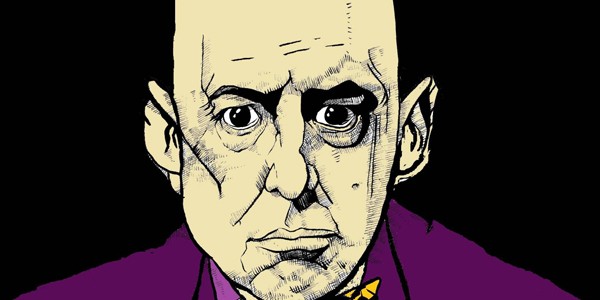 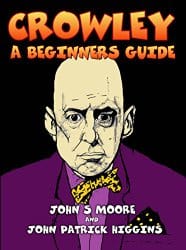 Aleister Crowley was an Edwardian magician and founder of a new religious movement, Thelema. He was infamously described by the British press as “the wickedest man in the world.” A lot has been written about Crowley the man, there have been a number of biographies, and several introductions to his works, such as Richard Kaczynski’s Perdurabo, but I can’t think of another book that’s taken quite this approach.

John S. Moore‘s previous book, Aleister Crowley: A Modern Master, was a more straightforward biography, and while I took issue with some of his conclusions,1 Moore obviously knows this stuff. Here we get an illustrated introduction to Crowley’s life, philosophy, and magical practice.

Crowley: A Beginner’s Guide is illustrated with expressive line drawings by John Patrick Higgins, with photographs inserted that will be familiar to Crowley aficionados, though they may appear fresh to those who are coming to the Beast for the first time.

Intended as a starting place for readers who want a light introduction to Crowley, this little book tackles a lot of material into bite-sized chapters as brief as one or two pages in length. After a cursory overview of Crowley’s early life and influences (Christianity, Percy Bysshe Shelley, Frederich Nietzsche, Lord Byron, etc.), the main thrust of Crowley is to highlight how the man and his work have acted as a hidden influence on our times,2 particularly in terms of his art, radicalism, and intellectual pursuits.

On Crowley’s influences, Moore writes that Nietzsche’s personal life “did not match up to his own philosophy. Arguably Crowley[‘s] did.”3 Arguably indeed. Crowley remained a racist, sexist drug addict, whatever his magical triumphs. Moore doesn’t shy away from criticism of his subject, however, he does cite Edward Said’s Orientalism,4 while noting that “Crowley would presumably have been unfazed. Aiwass was an imperialist.”5 These tidbits cry out for a deeper analysis. Alas, that is beyond the scope of the present book.

Moore does a decent job of presenting more than merely the exciting and titillating parts of Crowley’s life, and does not shy away from his negative qualities, such as Crowley’s sexism, racism, and animal cruelty.6 He presents common defenses to these criticisms, without necessarily endorsing them.

Crowley’s influence on rock and roll is most often noted, such as in the works of John Lennon, Jim Morrison, Jimmy Page, and David Bowie,7 but here Moore also hints at Crowley’s larger cultural legacy, and how it affected the counterculture of the ’60s, punk, and performance art. Each topic is teased, and could be the subject of its own independent book. This works to situate Crowley in a contemporary context, among those who read and discuss his life and works today.

We dash over the array of titles Crowley conferred upon himself, as well as initiatory grades — both those from the Golden Dawn and the Ordo Templi Orientis, as well as those he conferred upon himself — and get into his fancy dress, espionage, mountaineering, theosophy, Rosicrucianism, and what he considered his previous incarnations. Those just learning about Crowley may find themselves bewildered by the rich diversity of his passions. A brief survey of the practices and subjects Crowley covered in his work is also given, such as gnosticism, kabbalah, astrology, i ching, tantra — the list is near exhaustive, but, as stated, the chapters are brief, so readers only get a taste of what they can then go on to explore in other works.

And this is where we find the book is lacking. A couple of biographies are mentioned in passing (namely, Martin Booth’s and and Charles R. Cammell’s, along with a few others),8 but the book would benefit from a recommended reading list for readers who wish to pursue these topics in greater depth. The bibliography does list a number of Crowley’s works, and biographies that interested parties may consult, but a more organized list giving specific topics for readers to dive into would have been more useful.

In short, Crowley: A Beginner’s Guide offers a whirlwind tour through Aleister Crowley’s greatest hits, misses, and miscellany. For those who have never heard of the man, it’s may prove too cursory, but for those who have heard of Crowley, and want to get an idea of what he was about, this is an accessible introduction with great visuals that will be a boon if and when the reader desires to learn more.