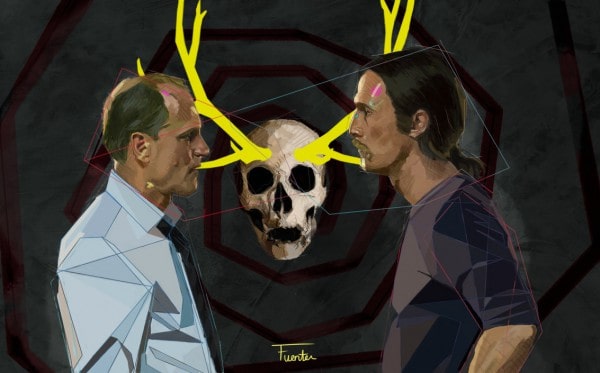 Until February of 2014, The King In Yellow by Robert W. Chambers, a 1895 collection of thematically linked short stories, was a little-known work. Although a favourite of horror fans, admired both for its menacing aura and its influence on HP Lovecraft’s Cthulhu Mythos, it was not widely read outside fan circles. In that month, however, it entered Amazon’s top 10 bestseller list. The reason was a new television show, HBO’s True Detective.

True Detective, created by novelist Nic Pizzolatto and stunningly directed by Cary Fukunaga, tells of the 17 year long investigation into the ritualized murder of a young woman in rural Louisiana, and the effect the case has on its lead investigators, Marty Hart (Woody Harrelson) and the almost alchemically named Rust Cohle (Matthew McConaughey). The show immediately captured the attention of both a wide audience and TV critics, who were captivated by the show’s look and Southern Gothic style. The second episode, however, upped the stakes considerably when the diary of murder victim Dora Lange was found to contain references to a Yellow King and his realm of Carcosa.

A major aspect of the original King In Yellow stories is that the King rarely appears in the actual text. In each story someone is caught in the spell of a fictional play – a work that is rumoured to drive its readers insane. The stories themselves have few quotes from this mind-shredding text – perhaps the best known is this excerpt (referred to obliquely during the show):

Camilla: You, sir, should unmask.

Cassilda: Indeed it’s time. We all have laid aside disguise but you.

Stranger: I wear no mask.

Camilla: (Terrified, aside to Cassilda.) No mask? No mask!

Within True Detective, the Yellow King is likewise kept at a remove…mentioned with fear but never precisely seen, he/it is more of a menacing presence than an actual personality.

Horror fans soon jumped on this reference and, the Internet being what it is, enthusiasm for this previously obscure work soon spread. The next episodes made it clear that a cult worshipping the King in Yellow was somehow involved in the murder. Fans leapt on the possibility that what had began as a police procedural (although admittedly well-made and riveting) had the potential to be something else – a high-budget TV tale portraying the cosmic, sanity-breaking horror which Lovecraft and his heirs (and, it must be noted, many chaos magicians) embraced so thoroughly.

That enthusiasm was boosted considerably when it was discovered that Pizzolatto had earlier in his career cited two writers as a particular inspiration, the comic creators and magical practitioners Alan Moore and Grant Morrison. Aside from the extensive references to The King In Yellow stories, other elements of the show seemed to be drawing on the same kind of mysticism both of those writers have explored thoroughly: one celebrated scene in the show has Rust Cohle (a nihilist with a brutal cynicism regarding humanity as a result of bereavement and years of drug use as an undercover narcotics cop) explain to investigators the concept of time viewed from a higher dimensional perspective. “Time is a flat circle” when viewed from a being of such a dimension, he says… a perspective shared by some of the entities in Morrison’s celebrated occult comic series The Invisibles – especially a monstrous creature known as The King-Of-All-Tears… who was also known as the Yellow King.

I was far from alone in thinking there was a real possibility that the show could actually end as a full-blown Lovecraftian horror tale, and, though this isn’t quite what we got, the ending contained more than enough hints that such an interpretation was not unthinkable.

Certainly, the show gave its viewers a remarkable version of the Chapel Perilous, the brutal forced initiation of a seeker – Rust Cohle in this case – who has to undergo a harrowing ordeal, which they can only emerge from by facing literally everything they fear before reaching enlightenment. Like the readers of the King In Yellow play, Cohle’s sanity is stretched to breaking point – but in his case, all is not completely lost, and a measure of both illumination and redemption is a real possibility. Although Cohle’s insight is perhaps a limited one in the face of both the human evil and the possibly cosmic forces he has encountered, it is a powerful revelation.

I cannot recommend True Detective too highly. And the prospect of a second season, with entirely new characters and a different story (this one focusing on “the secret occult history of the American transportation system”), bodes well for both the general viewer and the occulture aficionado.

Trust me on this – you’ll want to watch the show first! It’s available to watch now on HBO Go and out on Blu-Ray and DVD in June 2014.

There has been extensive writing on the show, covering everything from its historical antecedents to the (to some viewers, problematic) treatment of its female characters. Narrowing down things considerably, I recommend The AV Club’s week-by-week reviews of the show, this article on the comic book influences (with extensive spoilers) and these io9 pieces, “The One Literary Reference You Must Know to Appreciate ​True Detective” and “Why True Detective Is A Supernatural Show After All.”

Are you a good witch, a bad witch, or something else?