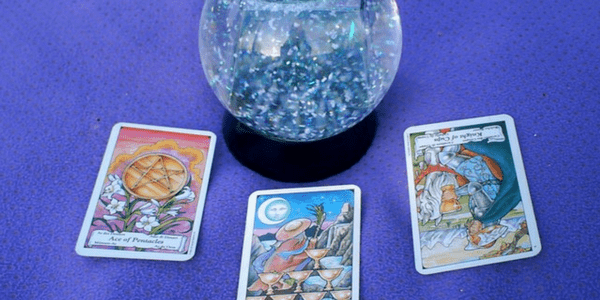 The first literary works written about tarot were sonnets by Teofilo Folengo and his contemporaries in renaissance Italy. Today, however, tarot fiction has become more popular than tarot poetry. (Because apparently, there are people who “don’t read poetry” or only read it for English classes.)

Related: Poetry to deepen your understanding of tarot, by Marjorie Jensen

Tarot is a site of transference between art and literature. The images in many tarot cards represent various mythological and religious stories. For instance, Strength in the Visconti-Sforza deck draws upon the myth of Hercules and the Nemean lion, and the four creatures in the Rider-Waite-Smith Wheel of Fortune were previously seen in the Books of Revelations and Ezekiel.

Tarot can also be used as inspiration for writing new stories. There are a large number of tarot spreads for characterization, narrative development, enhancing the environment, and much more. I’ve drawn upon Corinne Kenner’s Tarot for Writers

as well as created original spreads when designing my tarot writing workshops.

The Castle of Crossed Destinies

This is the classic, must-read work of tarot fiction. The premise for Calvino’s short stories is that travellers arrive speechless at a castle (part one) and a tavern (part two), and they can only communicate using tarot cards. My 1979 edition, translated by William Weaver, includes pictures of the cards alongside their stories. The tales themselves are readings of these illustrated spreads in the mind of the narrator.

Calvino uses the Visconti-Sforza deck in the first part of his book. His large spread includes a double file of 18 cards–two rows of nine cards–for each story, crossing the other double files for a total of twelve stories. The tales in the centre of this spread are re-tellings of Orlando Furioso. Outer rows include “The Tale of the Doomed Bride,” in which the narrator interprets the Page of Swords as a lost solider who meets a maiden of “starry pallor” (The Star). She is not what she seems to be, and the tale takes a Tim Burton-esq turn.

In the second part of his book, The Tavern of Crossed Destinies, Calvino uses the Tarot de Marseille. The spread for these cards is in irregular blocks instead of clear rows. Stories range from “The Waverer’s Tale”–which includes a parenthetical aside about T.S. Eliot’s Madame Sosostris–to a Shakespearean pastiche with Hamlet, Macbeth, and King Lear.

Better known for his (tarot) poetry, W.B. Yeats also wrote one of the seminal works of tarot fiction, first published in 1904. This is in part due to his close relationship to A.E. Waite and Pamela Coleman Smith (of the Rider-Waite-Smith deck) through their membership in the Golden Dawn. Some of the occult society’s “keys” of tarot can be seen in Yeats’ short stories.

Hanrahan, the titular character, can be read as a representation of the Fool card. In his journeys, he encounters a Magician-like figure with a deck of cards, a woman matching the description of the High Priestess, and four women holding the Minor Arcana suits (cauldron/cup, stone/pentacle, spear/wand, sword). Other cards—like the Sun, Moon, and Death—turn up in this collection as well.

The Tarot of Perfection by Rachel Pollack

This collection of short stories, published in 2008, is heavily influenced by Calvino. However, instead of following voiceless travellers, the tales are linked through recurring characters, including the titular Tarot of Perfection. Pollack’s stories are modern fairy tales: some dark, some urban, and all aware and engaging with the tropes of the genre (for example, each begins with a variation of “once upon a time…”).

Familiar tarot figures also appear, such as the Fool in “The Fool, the Stick and the Princess” and the Devil in “Carolina in the Morning.” Pollack’s introduction lists some of the decks she used—such as Golden Tarot of the Renaissance

, The Tarot of Prague

, and The Fairy Tale Tarot

—to create these tales. Her knowledge of tarot rivals Yeats’; both authors have important collections of tarot poetry as well as tarot fiction.

The Fortune Teller by Gwendolyn Womack

In addition to short story collections, there are a number of tarot novels that I have enjoyed. One of my recent discoveries is The Fortune Teller, published in 2017. The story follows Semele, an appraiser and cataloguer for an auction house who translates an ancient Greek manuscript.

Semele and the manuscript’s author, Ionna, are oracles, continuing the tradition of seers in tarot fiction. Womack takes up a favourite question among tarot writers and readers: What was the oldest deck? Ionna’s manuscript suggests it predates the Visconti-Sforza deck and even the fifteenth-century Tarot Sola Busca

. Tarot cards appear throughout as chapter titles, and exist as a presence reminiscent of Pollack’s Tarot of Perfection.

This is the first novel in Skibbin’s tarot mystery series set in Berkeley, California. Warren Ritter, the protagonist of the series, is a Telegraph Avenue fortuneteller. A reading inspires him to begin investigating, and he soon finds himself mixed up in a kidnapping. The setting enchanted me immediately. I live and work just off of Telegraph, and the local details—universities, bookstores, streets, etc.—are very charming.

Ritter is an unusual hero: a manic-depressive and a former Weather Underground activist. The discussions of radical leftist politics and mental health issues not only develop his character, but also the character of Berkeley in 2004. Overall, this is a quick and fun read that I recommend for its regional tarot flavor above all else.

These are just a few books from my tarot literature shelf. When seeking inspiration for my own writing, I have discovered that reading literature alongside cards can invoke my muse, and improve my cartomantic skills as well. There are a number of other works of tarot fiction that I would love to discuss, such as Andre Norton’s Mark of the Cat

, and I would love to hear about your favourite works in the comments below!

The Fortune Teller, by Gwendolyn Womack