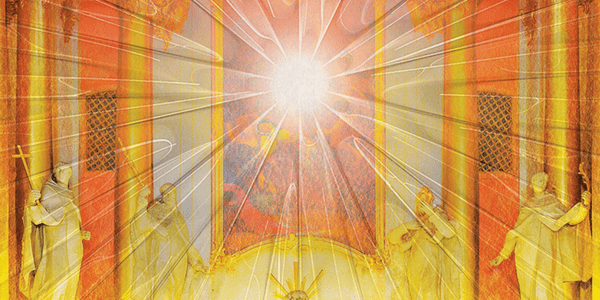 Barbara Hand Clow, author of The Mayan Code, Awakening the Planetary Mind, and Alchemy of Nine Dimensions, has finally released Revelations of the Aquarian Age, the second book in her fictional Revelations trilogy.

Revelations of the Aquarian Age, followup to the series debut Revelations of the Ruby Crystal, picks up the ever-thickening plot with the same cohort of characters, continuing deeper into the mysteries hidden in the Catholic religion, this time exploring the sacred lineage and bloodline of the union of Jesus Christ and Mary Magdalene, long hidden and suppressed to uphold the sanctity of the Vatican. Tapping into the zeitgeist of the New Age of Aquarius, where all mysteries will be revealed, this book unfolds as a dynamic, juicy, and delightfully suspenseful plot that had me eagerly turning each page, fully immersed in the unfolding story.

The book opens at the decadent wedding of the son of one of Rome’s most influential families, where lovers past, present, and future come together to celebrate. This presents a backdrop for the unraveling of the sacred nature of sexuality, the true concept behind the Holy Grail.

Armando, an artist with a tortured past, has just joined Jennifer, who is concealing her past, in nuptials binding them in marriage. Together they strive to reveal the secrets of the intimacy that develops when two souls merge in holy matrimony, struggling to become one even as they each move through the process of their own individuation.

This relationship is set in contrast to that of Simon and Sarah, the main characters of the previous book Revelations of the Ruby Crystal, now happily devoted to each other in marriage, who share a deep psychic bond that transcends both space and time, as well as happily parenting a little girl who is the physical manifestation of their love.

Claudia, the former lover of Armando who bore the brunt of his abuse in his younger years, has finally found a love who matches her intellectually, and she too joins the journey of finding the sacred in union through the intimate connection of becoming one with another in mind body, and soul. Yet, Jennifer and Armando’s love is threatened with the ongoing presence of Claudia in this close-knit group of friends, which setts the stage for a personal journey within for both newlyweds. As the past is explored, a new future is revealed.

Amid the personal drama, a dynamic blend of history, art, and psychology is explored through the book. The shift of 2012, as predicted by Mayan calendars, is of primary importance in the story as the characters try to piece together their own personal experiences to make sense of the changes happening on a collective level. “So, connecting the Maya date, perhaps we are in a time of revelation. We must strengthen our minds to avoid being sucked into the whirlwind that always comes at the end of an age, in this case the end of Pisces,” states main character, Sarah, during one of the many group discussions.1 With an understanding that the Age of Pisces is shifting into the Age of Aquarius, a transitional period that naturally brings both chaos and revelation in the world, the characters seek to understand what these shifts will mean for the future of humanity.

The turmoil of the present time — including war in the Middle East, which reflects conflicts between religious groups dating back to the Crusades, as well as ecological disaster — are viewed through the lens of a global awakening. This is figured by disaster due to humanity’s loss of its true history, specifically Jesus’s marriage to Mary Magdalene, due to the secrecy of the Vatican in order to maintain its control. Topics such as the history of conflict in the Middle East, the Crusades, and the protection of the Holy Grail by the Knights Templar help to reframe the past to unravel the secrets striving to come to light in the present time.

By looking back in time to understand the ways in which previous Ages of Pisces and Aries lead to the present state of time, the characters come to see this current age is the resurrection of the Divine Feminine, which had long been hidden by the Vatican. When Armando paints a picture of the love between Jesus Christ and Mary Magdalene, long held secrets are revealed. It becomes evident that the painting depicts a much deeper, esoteric imagery that gets at the true roots of Christianity, and features the prominence of Mary Magdalene as Jesus’s wife.

Many sources of spirituality are drawn on to highlight the inclusiveness of the awakening in the Aquarian Age. Through the book, knowledge of wealthy secret societies that use their power to influence events is combined with the occult wisdom of Native American traditions. Remnants of past lives, affect present-day events, and these are explored through Jungian analytical psychology. Psychic ability and intuition, too, lead the characters in their quest to solve the questions that plague them.

The blend of the emotional drama and sensationalism is characteristic of romantic fiction, and here it is back-laid by a plot featuring profound spiritual revelation, which makes this the perfect book for readers with metaphysical interests looking for a engaging novel. Hand Clow’s talent is truly shown in her ability to weave comprehensive theology and spirituality into a coherent story and bring it alive through the interaction between characters. The third person style allows the reader a view into both the private thoughts of the characters, revealing their inner psychological processes, alongside observation of how the characters, with their own unique stories, are joined together as though fated to uncover a long-buried history for the sake of awakening humanity. The discussion between characters yields thought-provoking material that will have the reader wanting to do their own research into the subjects discussed.

In this way, Hand Clow has woven an intricate tapestry of connection between the characters that serves to portray the information that is relevant and relatable. A highlight of Revelations of the Aquarian Age, was how it is rooted in present day reality, referring to our most recent political and cultural situations.

The most fascinating thing about Revelations of the Aquarian Age, is the way in which the characters discuss books such as The Lost Gospel and The Templar Meridians, and expand on the theories present in them. I was excited to be able to actually go and buy these books, and I felt a sense of camaraderie with these characters, as I am also doinng my own research. The whole plot resonated deeply with me, and the changes described are something I have felt and studied. This book put a lot of complex, seemingly unrelated theory into a well-knit understanding of what seems to be happening right now.

Revelations of the Aquarian Age was the best book that I have read in years. It is as though Hand Clow has taken all the information from her nonfiction books and put them together in a gripping story that helped me to process the information in story form; I absolutely loved how I was able to take in and understand the esoteric mysteries delivered throughout the book by the feeling of being immersed in the characters’ experience of the revelations firsthand.

I highly recommend Revelations of the Aquarian Age to anyone who is looking for a pleasurable read filled with insight into the rising interest surrounding sacred sexual union, the Knights Templar, corruption of the Catholic church, and the shift in consciousness happening as described by many different esoteric traditions at this time. This book will have you thinking about might be potentially reclaimed in our current world by re-examining history and being open to the information revealed as humanity does it best to deal with a rapidly changing, globally interconnected world.