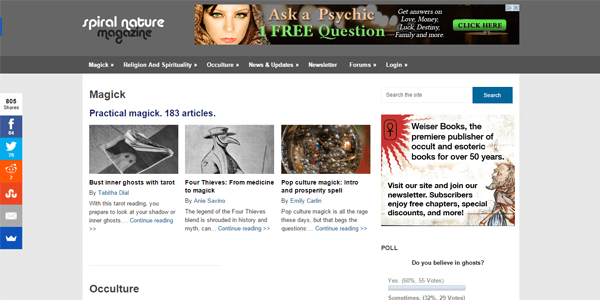 Spiral Nature was officially launched 15 years ago today, on 31 October 2000.

It’s gone through a lot of changes in that time, from being a static repository for all things occultnik, moving to WordPress in 2008, to its transition into an online magazine. Spiral Nature received its last major update in early 2014, and the Internet has changed quite a bit since then. It seemed time to refresh things.

The new layout retains many of the same features of the previous design, but it’s a little cleaner, and, hopefully, easier to navigate, with the three latest posts in each category clearly featured on the homepage.

Spiral Nature has grown from a site that collected Usenet posts and the better stuff found on private mailing lists to an online magazine that publishes original content 3-5 times per week. Thanks to advertising and the things you guys purchase via our affiliate Amazon links, we can even afford to pay our writers for their efforts. More than 50 writers and reviewers have contributed over the past two years alone, which is pretty incredible. We can even afford to pay two editors a small stipend for their tireless work (though our editor-in-chief remains unpaid).

Today Spiral Nature turned 15, and it’s amazing to think how far the site has come, and how far it has yet to go.

There are other new things in the works for the site that we’ll be rolling out in the coming months.  Your suggestions from the survey we sent out early in the summer were taken to heart, and we’ve got plans to launch a podcast, online courses, and likely a few ebooks in the coming months.

In the meantime, if you haven’t yet, sign up for our free newsletter to keep up to date with new developments, and take a test-drive of the new site, and let us know what you think in the comments.

If you have any further suggestions, we’d love to hear them.