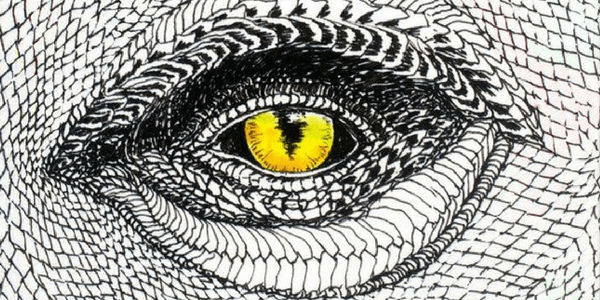 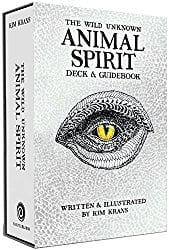 Oracle decks are very popular among people who read intuitively. The Wild Unknown: Animal Spirit by Kim Krans is a animal based oracle deck, similar to the her tarot deck, The Wild Unknown, that channels archetypes in a format that people can relate to for honest and upbeat readings.1

I received this deck after having worked with the The Wild Unknown tarot deck. The Wild Unknown: Animal Spirit oracle deck and guidebook comes in a large, magnetic clasp box with a silver, slightly holographic dust cover. The box is white, it contrasts the dark colours of the Wild Unknown tarot deck, for those folx who are thinking of getting both. Inside the box is a full guidebook, and nestled underneath is another box that contains the cards. The cards are tarot-sized and of good card stock with a lightly patterned back and clear images on the front. All in all, a very attractive package.

The first thing I did was check out the guidebook. It’s not huge, and the bulk of it ontains explanation of the cards. The book opens with an introduction in which Krans explains how she came to create the deck. This introduction also gave me a hint as to what this deck would be like. Although it is described as being about “animal spirits” it’s not really based on any specific culture’s beliefs about animals, instead it takes different personality archetypes that can be found within us all, and assigns them to animals, so that readers can better understand them. The introduction provides the examples of the timid rabbit versus the bold eagle.

Although some of these archetypes have been tied to these animals throughout various cultural practices, such as the strong and lone wolf, the deck lacks any sort of specific spiritualism in and of itself. Although Krans did draw on some yogic philosophy and refers to chakras a bit in the reading, these themes are not heavy in the actual deck itself. If no one told you about the connection with yoga, it is unlikely that you would pick this up from the cards themselves. I certainly didn’t, and I am a yoga teacher. It really is, in many ways, a deck full of animals and ideas. Which is nice as it can be used by many people from a variety of backgrounds.

Now to address the elephant in the room that is the deck’s name. It invokes a relation to “spirit animals” that I have already discussed the issues with, at length, in the article “Not your spirit animal: Cultural appropriation, misinformation, and the Internet.” Krans does not do any work in the book to distance herself and the deck from that sort of appropriation. Instead, in a chapter titled “What’s My Spirit Animal,” she talks about how we have many different animal guides that work with us, ignoring the loaded nature of the question itself. Although, after working with the cards, I don’t think the deck itself is appropriative, I do cringe at the lack of work that was done in addressing this issue. 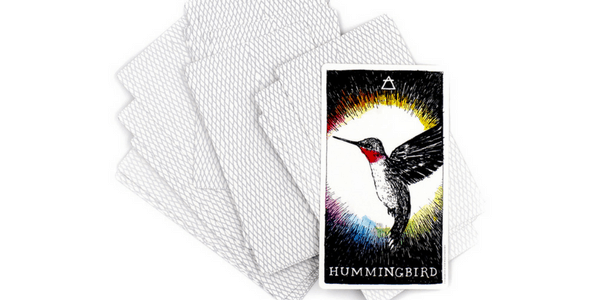 The cards themselves feature a wide variety of animals and insects. There are five suits that correspond with the four elements and spirit. The animals featured in the deck are all wild animals, and so you will not find domesticated pets on these cards. The animals are sorted into suits by where they live in the natural world. In the spirit suit, the seven cards are mystical creatures (dragon, phoenix, etc) and align with the chakras. The chakras can also be read as the hierarchy of needs for those who are not into chakras.

The art is black and white with splashes of colour. The cards display the animals themselves, with maybe a bit of background work. The illustrations are very high contrast, artwise, and they are simple to read. The art is off-centred with random margins on each one, making it impossible to trim the edges, if you’re into that sort of thing. They are not numbered. They feature the elemental symbol on the top, and the name of the animal on the bottom.

Because the cards are not numbered, you must flip through the element sections to find the animal for interpretation. This is a bit annoying. Although the book isn’t large, having to constantly flip through every page in a section takes time, a problem that could be solved by simply numbering the cards.

This deck is more about exploration of yourself than anything else, so when I did question it about outside situations, the guidance was not very clear or easily understood. When I focused on asking questions about my energy and feelings, it was much clearer and more useful.

In the readings I did with the deck, I found that it was very good at getting at the root of a problem, really getting to the heart of the matter around why I was feeling or acting in a certain manner. However, the readings were not helpful in figuring out what do about it. The way the descriptions are set up, they do offer an idea of what it is like when the energy of the animal is out balance, and offers some vague suggestions as to what you can do to bring things back into balance, but to me, finding the correct course of action with these cards was not an option. It could tell me what the issue was, what I could possible be feeling in the future, but it lacked a way to connect the two with actions I could initiate to resolve problems.

With that in mind, I found these cards to be useful as tools for self-exploration and discovery. Great for meditating and simple readings. When dealing with the past and present, the readings were great, and very clear, but again, when looking forward, the readings became more vague.

The deck also lacks any sort of negativity and focuses only on the positive. Although there are negative aspects of the cards mentioned in the work, this is almost an aside, and instead readers are directed to look towards the “light,” so to speak. This is same philosophy that as present in the Wild Unknown tarot deck, so I’m not really surprised that this deck takes on the same characteristics.

Krans writes that she hopes the people who use this deck can move past what she has written in the book or other animal meanings that they have gleaned from their own studies, and instead begin to attribute their own meanings and understanding to the cards. We each carry our own history and connections, so if someone feels connected to this deck, then yes, this is very possible.

As for me, I probably wouldn’t use The Wild Unknown: Animal Spirit as a go-to deck for my practice. I may draw cards once in a while for mediation or small readings, but it’s so personal and inner-focused that unless I’m working with those sorts of questions, there’s not much room for it in my practice.

Still, the deck itself is pretty solid. Despite the fact that it bypasses the issue of appropriation arises from the name, the deck itself is pretty neutral and easy to work with. The Wild Unknown: Animal Spirit is perfect for people who need a bit of help to see the light in dark times. Even though I will not be using it in my own practice, it is a good, solid oracle deck that provides a lot of room to grow with it.