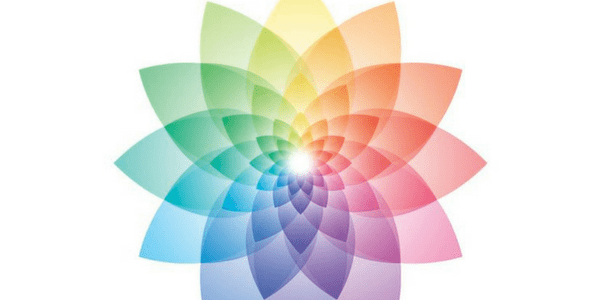 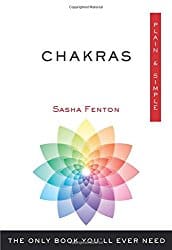 Chakras, Plain and Simple: The Only Book You’ll Ever Need is a slim volume with a long name, and its simple cover and modern look are straightforward and unintimidating. Sasha Fenton’s style is likewise clear and casual, and she succeeds in packing a lot of information into a small book that is easy to breeze through in a few hours. However, calling it “The Only Book You’ll Ever Need” is something of a misnomer — while it’s well suited to be a beginner’s primer, I often found myself wanting a little more depth and specificity.

The book is divided into four sections. The first of these describes what chakras actually are, as the author perceives them, and gives a brief history of the concept. This is where Fenton’s style shines through; it isn’t easy to explain an invisible system of subtle energies, but she does so quite clearly and concisely. She paints a picture of the seven major chakras as being like spinning cones which extend outward from the body in both front and back, connected to the nervous system, and it is easy to picture a working model from her spare prose and a few limited illustrations (the book contains both modern diagrams and a few historic reference images, in black and white).

There follows a brief history of the concept of chakras, charting it through its first appearance in the Upanishads up to its introduction in the west via the Theosophists. It is in this section that I would have hoped for a bit more academic rigour on the part of the author. No sources are cited here or elsewhere in the book, nor is there a bibliography. While many of the author’s examples later on come from her own personal experience, there were several claims throughout the book which I would have appreciated references for. For example, in the section on colour healing, she cites a medieval practice known as “the red treatment,” where those suffering from chicken pox would have their bedsheets and curtains replaced with red ones. “This weird therapy works, because something in the spectrum of the red color prevents chicken pox from forming scars.”1 However, some quick research reveals that in fact the red treatment was for smallpox, not chicken pox, and though it was widely used even up until the 1930s, there was no scientific evidence that supported the claim.2  Of course, this is not to say that it couldn’t possibly work, only that Fenton’s claim as it appears here is misleading on a few accounts, and made me question the validity of some of the book’s other information. A list of references would have gone a long way towards elevating the credibility of the book as a whole, as well as providing the beginner with a helpful list for further reading.

The next section, the largest of the four,  covers in more detail the seven chakras from base to crown. For each there is a table of correspondences outlining its colour, core themes, mantra, corresponding zodiac sign, and so on. I found this particularly useful in forming a general impression of each chakra. For example, the solar plexus chakra and the  sign of Leo are in harmony with one another, and if you have a knowledge of astrology, this can be quite helpful. Each of these sections details the chakra by outlining the qualities of a person who possesses a well-developed chakra, citing specific examples, such as by noting that “Those with a healthy base chakra are blessed with common sense, a love of the earth and of nature — so powerful base chakra folk might be talented gardeners, carpenters, builders, farmers, or civil or mechanical engineers.”3

Fenton also details the qualities of a person with too much or too little of the given chakra, as well as what this might mean for a person’s physical as well as spiritual and mental health. In order to strengthen the given chakra, Fenton also provides an affirmation  and exercises for each. These exercises run the gamut from simple visualizations and meditations, to having a bath, to practicing astral travel. These sections feel somewhat uneven — while some give detailed instruction, others feel a bit underwritten. But the exercises themselves are, for the most part, useful and enjoyable. The exercise given for opening and closing the chakras, in particular I found to be deeply relaxing, and I believe it will be part of my mediative repertoire for years to come.

The third section is a brief look at chakra healing techniques, and gives a cursory look at the use of colour, stones, scents, and food to heal blocked or imbalanced chakras. Fenton is careful to point out that energy work is no substitute for medical care, but can be used in conjunction with conventional medicine.

The fourth and final section talks about the existence of additional chakras beyond the main seven (tradition holds that the body contains 78,000 in total). The exercises and suggestions in this section are mainly aimed at helping the reader become aware of these additional energy points within their own body. And finally the author devotes the final pages to the topic of kundalini, that coiled energy that “lives” at the base of one’s spine. In my experience, I’ve been taught to have a healthy respect (bordering on fear) of awakening the kundalini energy improperly, so while I’m glad Fenton addresses it, her casual tone reads as almost flippantly here.

Given all this, I’d still recommend Chakras, Plain and Simple: The Only Book You’ll Ever Need as a useful beginner’s primer, confident that even someone with no experience whatsoever could understand the concepts within. But if you are looking for greater depth and detail I’d suggest looking elsewhere.