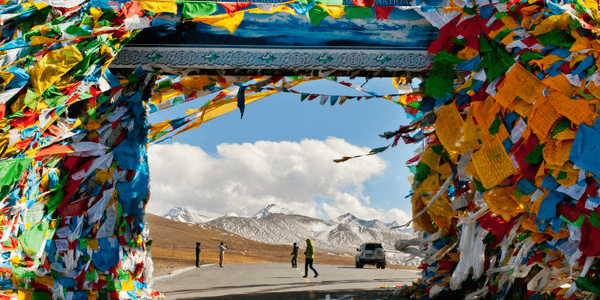 When most people think of Tibet, they think of Buddhism and His Holiness the 14th Dalai Lama. Despite being a predominantly Buddhist country for the last twelve hundred 1,200 Buddhism has coexisted, often violently, with a shamanic tradition as well. Tibetan Shamanism

is an anthropologist’s work based on decades of study and first-hand experience living with these shamans. The book covers the history, theory, and living traditions of Tibetan shamanism in an academic manner that’s still easy to read and filled with personal stories.

I should stress here that this is an anthropological book, not a guide or a how-to. While you will learn a lot about the Tibetan shamanic tradition, this book will not actually teach you how to perform the rituals involved. If you’re interested in Tibetan culture and religion, this is a fascinating book to explore. I personally loved it, but I want to make sure people buying it don’t misunderstand the content.

Peters refers to Tibetan shamanism as “A study of soul in the context of shamanic healing, trance states, and the interactive relationship with spirits.”1 It is a very challenging task for many reasons. Peters explains that, though we contrast Buddhism with Bön (the pre-Buddhist shamanic religion of Tibet), it isn’t necessarily a clear distinction.2 Over the past millennium, both religious traditions have heavily influenced each other, to the point where they are largely indistinguishable from each other in many ways. While many may call Tibetan shamanism Bön, it’s fair to say that Tibetan Buddhism has many shamanic elements in it.3 All the shamans Peters studied with identify themselves as Buddhist, while also working with Bön deities.4 While Lamas and monastic Buddhists might disapprove of shamanism, it is very much a part of life for many Tibetans — something unofficial but nonetheless very important to the people, similar to how a lot of folk magick traditions survive in Catholic countries.

Despite the difficulties in distinguishing the traditions, Peters does a great job of introducing the reader to the key elements of Tibetan shamanism, explaining where the shamanic beliefs differ from the Buddhist ones, and how those differences are often bridged by practicality and put into use regardless. He begins by explaining the different parts of the Tibetan shamanic “soul”5 and how that works in relation to the fact that Buddhism does not have a concept of a soul. This explanation of the soul and its various parts is almost a quarter of the text, which might seem excessive, but in Tibetan shamanism, essentially everything is traced back to the soul, especially health and long life which is the focus of the book. He discusses the la kuk tshe kuk (or bla hgugs tshe hgugs), a healing ritual meant to bestow long life6 at great length, explaining both the theory and the practice, which is very helpful for illustrating both the underlying beliefs of the tradition and how it reflects upon the community with the role of the shaman as healer.

Throughout the book, Peters relays not just theoretical information, but personal information and experiences with different shamans, which shows how varied the beliefs and practices can be between different practitioners even in the same tradition. Perhaps the most interesting of these shamans and associated tales is of Mrs. Dolkar, a shaman who is known to be possessed by the Buddhist goddess Dorje Yüdronma. Mrs. Dolkar is a kind woman in her sixties, but when possessed by Dorje Yüdronma she becomes a fierce woman who may violently attack those she is healing in order to scare away spirits causing diseases.7 A chapter is also devoted to the yeti, which in Tibet is not just a bigfoot monster, but a stranger spiritual creature with great magical powers.

My only real complaint is that, while he claims all Tibetan terms are written phonetically and will be followed by the transliteration, this is not the case throughout large sections of the text.8 It’s unknown if this is because he didn’t know the proper spelling, not being a Tibetan speaker, or if they were overlooked, but it makes it very difficult to do follow-up research. Tibetan phonetic spelling has huge variations (and many different accents and dialects) and they often don’t reflect the proper spelling; illustrated earlier in the review with the word kuk, which is spelled hgugs. This will mostly only be a concern for more serious students, and there is a good chance the extensive citations could help illuminate these gaps.

All in all, Tibetan Shamanism is an excellent book on a topic that is still not widely examined. Many other books on the subject are written either with a bias against the tradition (using phrases like “uncivilized” regarding these beliefs) or written as how-to guides without addressing the underlying cosmology. Peter’s easy-to-read but still informative text is a refreshing change. It is clearly written by an academic and thoroughly supported by textual sources, which is much appreciated by those of us interested in the subject. All the time Peters has spent in different Tibetan communities provides a comprehensive, living perspective. If you’re interested in Tibetan Buddhism or shamanism, or shamanism in a general cross-cultural sense, this book is definitely worth picking up.