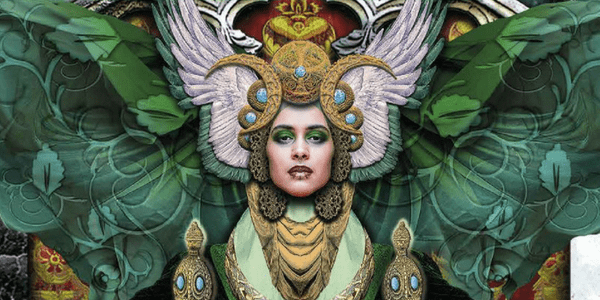 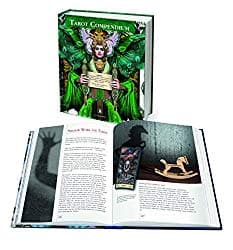 Finally, the massive work Lo Scarabeo’s Tarot Compendium series is complete! With the third and final volume, Tarot Compendium, edited by Sasha Graham, the comprehensive mega resource for all things tarot has been wrapped up. The last book, despite feeling a bit light, adds depth and insight into tarot reading covering varied esoteric practices that can be incorporated into reading tarot, while still keeping the same over all look and feel of the series.

This book is about the same size as the past books, with much the same layout and overall look. Stylistically, it fits the past books in the series. Inside, as before, the art consists of stock photos, diagrams and, of course, various decks.

Unlike the earlier books in this series, in Tarot Compendium, there weren’t quite as many decks shown. The decks that were featured tended to be used for whole chapters at a time. I felt this was a loss, because seeing different decks and differences between them in the earlier books was a unique way to illustrate how different decks affected the reading, as well as a way to see less common cards from decks that readers who are looking to expand their collection may be curious about. Although I was sad to see that there were fewer decks featured throughout, this is a personal issue and does not affect the overall quality of the book.

Before we get into the content, something should be said about the table of contents. It does tell you where everything is, but it also tells you that there aren’t as many topics covered in this book as in the previous entries in this series. My biggest issue with it, though, was that even though it gives you the overview of the chapters, there was more than enough room to give you a breakdown of each section to make locating information easier once you really dive in. For example, when they were discussing the zodiac, it would have been nice for the chapter headings of the individual pages if the different signs were listed. Or if the individual spreads from the spread library had been given a place in the table of contents. Brevity does not help readers in this context.

The content of Tarot Compendium was as expected, which is to say that it dove deep into the esoteric with the use of tarot. It covered topics such as astrology, sacred geometry, and numerology as it relates to the tarot practice — things that are generally considered advanced uses of tarot. Each of these sections was set up in much the same way, with pages keys, and brief explanations of the uses of these different techniques.

These sections read more like a down and dirty guide than a full understanding. They covered what is most important to know about them, but the space devoted to these different practices was taken up by charts and pictures and, for me, these sections lacked depth. Sure, the important information was given, and with just this book, you could certainly apply that to your practice, but it was not much more than a top level understanding of things. Still, it was a wide spread of information, and enough to begin to incorporate it into your practice.

Most of the sections in the book were padded with art and pictures. Some of them were useful, such as the various charts that show the cards in relation to different practices, such as where they are on the zodiac, or the elemental correspondence. That being said, there is also a good deal of waste. Full-page spreads that only convey a few bits of information where they could have shared pages. Or very large pictures of gods and goddesses.

Outside of this, Tarot Compendium also included information on more intuitive practices, like free association, which I found to be interesting, but again, it was very short and much of it seemed to be advice to try it out and see what happens. The same can be said for the section on tarot magick, which gave a general idea and some starting points, but didn’t dive super deep into the practice.

Something that the book did cover that was very interesting was the business of tarot. The series has touched on this in the past books but this one was more geared to the professional and spoke of things like rates, offered services, and taxes. It’s very rare to find a work that discusses the business of spiritual work beyond “should we be paid for these services?” The inclusion of such information was welcome and more than needed!1

There was very little bonus content in this volume. Since this was controlled by Kickstarter backers, this isn’t really the publishers fault. However, the additional content is very thorough,and worth reading, as it describes how to use tarot in different ways, as well offering as business ideas.

Although Sasha Graham edited Tarot Compendium, the book also includes work by Giordano Berti, Tali Goodwin, Marcus Katz, Mark McElroy, Riccardo Minetti, and Barbara Moore. People who are familiar with tarot will likely recognize these names from their work on tarot books and decks in the past, or from  their own books. You can see their influence throughout, but thanks to the work of Graham, everything reads as if it were under one author.

The bonus content was contributed by Kim Huggens, Theresa Reed, and Nei Naiff. I was familiar with everyone except for Naiff, which makes sense, because sacred geometry is not one of my major fields of study. Each of these authors put in a good deal of work for their chapters, outlining a copious amount of information, suggesting new ways of both practicing and teaching tarot.

There were also quite a few new spreads in this book. It is set up in an odd way where, again, a more detailed table of contents would have helped, so it does not seem like there are many spreads. There is a spread library that holds many advanced spreads, but throughout the chapters there are also specific, discipline based  spreads for people to try out that correspond with the subject of the chapter. I actually like this way of organizing a lot, but I wish they were easier to find!

I found the information in this volume to be worthwhile; however, it felt in many ways as if there was not enough of it. The book, despite having just over 650 pages, felt in many ways to be too light. The biggest complaint I have is that it  gave the basics of these techniques and was lacking the deep dive information that was found in the first two volumes.

Still, I think if you have the first two books, then Tarot Compendium would round out your collection. It is more of a reference than the previous two books, which I felt you could learn a lot more from, whereas this one feels more like something you pick up when you forget the difference between the dry and humid paths, or want to try out a new spread.

As a book, Tarot Compendium was fine, but I was left underwhelmed. Still, there’s a good deal of information in this volume, and if you’re looking to expand your tarot practice, there are many places to start, but you’ll have to hunt down more resources to really dive deep.