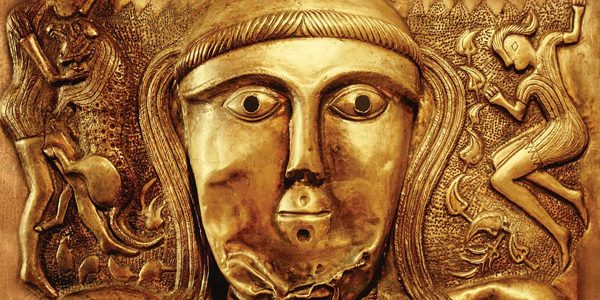 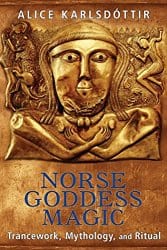 In the preface to the second edition of Norse Goddess Magic, Alice Karlsdóttir reflects on the changes she’s observed in the Heathen community since she first wrote the book more than 15 years ago. These observations are particularly poignant juxtaposed against the book’s original preface — also included —  where Karlsdóttir writes that Norse Goddess Magic grew from her own need to understand the goddesses she works with, and to deepen her relationships with them despite that lack of surviving historical writings about them that Reconstructionists prize.1 At the time, she writes, the community’s focus was on research and attempting to faithfully recreate traditional Norse and Germanic practices. Meditation, tranceworking, and other experiential methods for supplementing lore were met with resistance. In the ensuing years, Karlsdóttir observes, the pendulum has swung the other way, with more value and credibility placed on subjective experience and opinion.2

The case this book makes for trancework and meditation as a valid means for Reconstructionists of any tradition to connect with their deities may be what made it groundbreaking originally. Today its value comes from the quality of its introduction to Heathenry and trancework, its accessible information on little-known Norse goddesses, and from the balance it strikes between a semi-academic resource and an advocate for lived spiritual experience.

Norse Goddess Magic is divided into two parts; in addition, it includes generous endnotes. The first section serves as a general introduction to both Norse Heathenry and trancework. The first two chapters focus on the basics of Heathenry and the significant roles mythology, research and working from legitimate, historical sources play in its revival and continued practice. The rest of Part One is a comprehensive discussion of trancework, its history in the Western world, how to enter a trance-state, and common challenges faced by those new to the discipline. Also included is an example of one of Karlsdóttir’s own trances including the introduction, the journey — or the experiential element — and the return to the physical world. Karlsdóttir notes that this is not the only way to enter or experience a trance-state, and she encourages newcomers to try different methods to see what works best for them. It’s a solid starting place that leaves plenty of room for individual study and experimentation.

The second section is the real substance of the book. Rather than working with the entire Norse pantheon, Karlsdóttir narrows her focus to goddesses — she notes at the beginning of the book that they can be challenging to find credible information on — specifically Frigg, the Allmother, and her attendants, the 12 Asynjur associated with her.

I’m a bit conflicted about the book’s selection of goddesses. On one hand, I appreciate its willingness to focus on the divine feminine in a tradition that seems to me, as an outsider, to be very masculine. (Although, my perception is probably coloured by Marvel comics and popular culture’s interpretation of Norse mythology.) Norse Goddess Magic is an excellent resource for an experienced Heathen looking to expand their worship. However, the challenge it presents to a newcomer is that it does not include many of the major Norse deities, both gods and goddesses. While more than 50 pages of text — a full fifth of the book — is dedicated to Frigg, other major Norse goddesses are never dealt with.  Freya does receive mention, but only in juxtaposition to Frigg. These two goddesses are both associated with women’s spaces and rites, and so they often overlap in areas of love, fertility, healing and women’s work. Karlsdóttir is very interested in making the distinctions between the two opaque, which, while useful, doesn’t go as far as offering any sample rites or invocations for someone looking to work specifically with Freya.

That is the downside of the book’s focus on Frigg and those goddesses associated with her: while Frigg is the Allmother and Queen of Asgard in Norse thought, her sphere of influence isn’t all-encompassing. Likewise, some of the 12 Asynjur only embody one aspect of Frigg — for instance, Syn, a goddess whose role is limited to defending the accused and protecting a household from those who are not welcome. While it’s nice to gain some insight into some of these more obscure goddesses, I also question what sort of role they might play in contemporary worship. Additionally, because  the Asynjur ladies are personifications or magnifications of aspects and functions that Frigg already oversees, sometimes they come across as repetitive or redundant. Consequently, I sometimes felt that the book lacked the breadth that a broader selection of goddesses might have given it. Frigg has a strong tendency toward the domestic and the home. That realm may have been a virtually universal situation for Old Norse women, which makes it easy to understand her appeal to Reconstructionists. But such a firm focus on the home, wifely responsibilities, social order and gender-coded chores may ring hollow for modern women with different priorities. That was certainly my experience in reading the book, even despite Frigg’s associations with mysticism, magick, wisdom, and hidden knowledge.

The upswing, though, is that there is room for at least one companion book, depending on whether or not Karlsdóttir chooses to include the Norse gods in her writings. Her clarity and rigorous attention to documenting her sources regarding each goddess is unparalleled. Whatever quibbles I may have about various goddesses not meshing with my preferred lifestyle and methods of worship, I have no doubt that Alice Karlsdóttir was the perfect person to write this book. She is generous with her research and in documenting her experiences with Frigg and her attendants. At the end of every chapter she includes a sample invocation and an account of one of her own trance visits with each goddess; these sections are clearly marked in case readers would rather skip over them so Karlsdóttir’s experiences won’t colour their own.

There is a lot to glean from Norse Goddess Magic. Whether you are new to Heathenry, an experienced practitioner, or even from a different branch of Reconstructionist spirituality, it is a worthy addition to your collection.