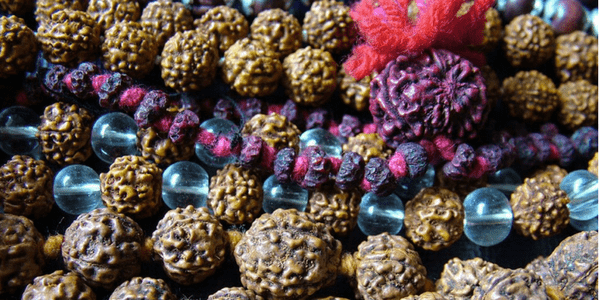 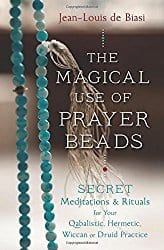 As we learn right away in The Magical Use of Prayer Beads, bead making is an ancient craft tinged with spirituality. The earliest beads found are about 82,000 years old and Hindu prayer beads, or malas, date back to the eighth-century BCE, according to this book. We are told that the most well-known devotional beads, the Christian rosary, had its beginnings between the third and fifth centuries as knotted ropes, later evolving into the plethora of rosary styles we see today. Yet, author Jean-Louis de Biasi notes that prayer beads are either unknown or largely unused by modern, non-Christian Western spiritual groups.

He has set out to change that by writing this book, both a manual and a ritual guide. When strung together in a loop, every bead, knot, and charm is a symbolic representation of some aspect of the Divine we wish to invoke, he says. And while the book doesn’t instruct us in their creation, it does provide a framework for using these ancient devotional objects in kabbalistic, Hermetic, Wiccan, and Druidic traditions.

The book is divided into five sections: understanding prayer beads and their uses; general principles of ritual practice; blessing and consecration of the beads; presentation of the traditions and how to use the beads in each; and rituals for each tradition. We’re given a lot of choice in how to use the book and the beads. Their use, de Biasi says, “can be considered a meditation and a magical action. Depending on which ritual you choose, one or the other will be emphasized.”1

For each of the traditions, de Biasi has written ceremonies using the beads in meditation and in an individual ritual, a two-person ritual, and a group ritual. The meditation and the individual ritual are written in great detail, with instructions for modifying the individual ritual for additional participants. If, like me, you are a not so much of a ceremonialist, having a step-by-step guide is truly welcome; yet referring to the book for scripts of the longish rituals may interfere with their smoothness unless you can memorize it all.

A technical difficulty with several of the rituals (and even with some of the commentary) is that the author refers to his website for illustrations, lists, and layouts for their performance. You’ll need to download these to perform the ritual; unless you already know what they look like there’s no way to do it without referring to the website. Sometimes these are simple illustrations that could have been reproduced in the book, and would have helped readers visualize the concepts as they are presented. For instance, in the hermetic tradition’s Ritual of the Cross, de Biasi describes several versions of the rose-cross symbol and refers readers to his website to see them. Not only may readers not be able to access the Internet while reading, being asked to do so interrupts the flow of the book and may affect the decision whether to perform the ritual.

On the other hand, the author makes good use of this integration when his website supplies an audio tutorial on Hebrew and Greek sounds and words used in the kabbalistic and hermetic traditions. An appendix also contains a written guide to these sounds, so there’s no need to access the website as you’re reading — but it’s so much easier to learn them by hearing them that having them available on the website becomes an added bonus.

Why this emphasis on correct pronunciation? De Biasi explains:

Sounds can be seen as the heart of the prayer beads. Every spiritual tradition using this ritual tool associates it with precise pronunciations … These pronunciations create a vibration that resonates in your flesh and at the same time activates your body of light, your inner energy. Pronouncing these ‘sacred sounds’ is like playing a musical instrument. Something happens and affects the space where you are. The effects are not limited to you, but can have a visible and invisible impact.2

I wanted to review The Magical Use of Prayer Beads because I use them in my own practice and have found them to be an incredibly powerful and direct way of connecting with my guides and angels. I use Christian rosary beads with a Wiccan-centred Goddess Mary prayer with the same structure as the Christian prayer. De Biasi has decoupled the use of the beads completely from that model, and provided unique rituals for four other living traditions that will allow your practice to grow more sacred by their use. If you are crafty, making the beads yourself will imprint your own aura on them, and if not, there are instructions for consecrating the beads to incorporate your own energy. Either way, they are a doorway to the divine that may surprise you with their potency.