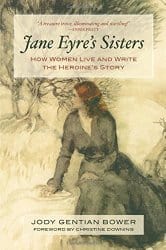 Jane Eyre’s Sisters: How Women Live and Write the Heroine’s Story is a wonderful and concise book exploring the Aletis, or wandering woman, who must wander off into the wilderness of the unknown to fulfil her ultimate destiny: being herself.

Jody Gentian Bower‘s central focus — the differences between the heroine’s journey and the hero’s journey, as related in Joseph Campbell‘s classic book, The Hero with a Thousand Faces — takes into account both classic literature as well as more recent pop cultural standards, such as Toni Morrison’s Beloved in a way that has something for everybody interested in the female experience, literary criticism, mythology, and mapping the hidden contents of our minds.

The text examines mythical figures such as Inanna or Ishtar and Psyche, to literary figures such as Elizabeth Bennett and Lyra Belacqua, Bower explores the archetypal story of “The Wandering Woman,” across time and culture.

Bower describes the Aletis — and her decision to adopt its usage — to define her thesis: “in this book I use both heroine and Aletis to describe the protagonist of stories about women who must wander in search of themselves and their true place in the world.” Rather than try and avoid the woolly mammoth in the drawing room, Bower comes right out and explores the Aletis myth in contrast to Joseph Campbell’s The Hero’s Journey.

The hero’s journey is cyclical, with a young man (although the hero in a hero’s journey may be female as well) being given the call to adventure, forced to go out into the world and prove themselves before they can return home, as an integrated balanced whole. The first few generations of feminist writers using the phrase “heroine’s journey” tended to focus on the female equivalent of the hero’s journey, which is unsurprising given that these were some of the first women stepping out into “the man’s world,” being forced to adopt masculine traits to succeed.

Branching off from this central tenet, Bower begins to explore the main causes and central themes for the heroine’s journey, taking in many literary examples along the way, most extensively in the chapter titled “Other Relationships At Home.” Seeing as for a great portion of Western Civilization, women weren’t allowed to leave the house, their worlds were comprised and greatly affected by the home, and the relationships that happen there.

Bower then describes the various phases of the heroine’s journey, and what transpires, each getting their own chapter; “Leaving,” “Into the Wild,” “The Woman of Power,” “The Time Of Learning,” “On Her Own Terms,” and “A New Life,” before wrapping up with a moving testament to the impact these heroines’ stories are having on the world and culture, “Transforming The World.” Each phase of the heroine’s journey is illustrated with a segment from a classic text, such as Vasilisa the Beautiful entering the dark woods in search of the witch Baba Yaga, to learn the secrets to her power.

Jane Eyre’s Sisters is a priceless addition to the library of those who love stories and reading into what they say about our collective unconscious. Bower gives fascinating insights into two powerful female archetypes, Inanna or Ishtar and Ereshkigal, who Inanna meets as part of her descent. Both are part of the underworld motif, common in stories with female protagonists. Bower theorizes that underworld stories may resonate with people who have endured abrupt trauma, and been thrust into the long dark night of the soul, as well as with people with optimal upbringings, such as the case of the “too good” mother. She also advocates compassion and empathy for Ereshkigal, the bitter queen of the Underworld, as an archetype for women who have been hurt or jaded by the patriarchy, who have turned against their own femininity and become misogynists themselves.

Bower also breaks away from reductive stereotypes of masculinity and femininity by delving further into what she calls “yang women” and “yin men,” which is to say aggressive and outspoken females and men who rely on traits other than brute force, such as intelligence or cunning. She also speaks on some of the causes of this conditioning, and the harm it can produce.

As occultists, Pagans, witches, and those interested in the unseen aspects of life, it is vital we break down these archetypes, and see the trees from the forest. Take, for instance, the word “mother” — obviously a very large and loaded category. There are billions of types of mothers out there — cruel ones, supportive ones, indifferent, perfectionist. To expect all women to act “maternal” is, logically, quite senseless. Which “maternal” do you want?

The problem is not with archetypes — they’re rather unavoidable. Stories are built of DNA, like any other living organism, and it would be difficult to have characters who don’t fulfil some role or function. The problem comes from thinking that’s all someone is — that a woman can’t be fierce, bloodthirsty, and determined one second, and tender and caring the next.

To be clear, Jane Eyre’s Sisters is predominantly by and about women, although some of the stories discussed are written by men. I do not mean or intend to read this in a masculine light, becoming yet another man taking over a feminist dialogue. I happened, however, to have been born with an X chromosome, and most of society still judges me, as it does most of us, based on our exteriors, so I’ve come face to face with many of these conditions all too frequently.

The part that hit closest to home for this reviewer was the breakdown between being and doing. The hero’s journey is defined by accomplishment. Is there any such thing as inherent masculinity, or must it all be done for the eyes of others? Even as a subcultural weirdo, I still feel this compulsion to always be doing something, “making something of myself,” never resting, always going. While I appreciate my hero’s journey, and my life has paralleled this trajectory in many ways, it also resonates with the Aletis model, fleeing from the expectations of 70 hour work weeks at meaningless jobs, from stoicism (although I admire and utilize the philosophy at times), from emotional disconnect. I fell away into uncertainty, and had many of the experiences Bower describes, like being lost in the wilderness, and having mentors teach me the ancient wisdom.

The other thing I appreciated greatly about Jane Eyre’s Sisters is the broad overview of many classic texts either written by or about women. Although this is a poor excuse, our society does not encourage men to seek out and empathize with women’s stories, and I have missed out on a lot of classic texts, which I’m starting to rectify. As somebody who’s interested in how everybody thinks, it’s essential to seek out as many points of view as possible, from all walks of life. Jane Eyre’s Sisters has a great bibliography, which serves as an excellent intro to both feminist literature, and great literature either by or about women.

As Bower points out numerous times in Jane Eyre’s Sisters, words have power. They become maps for reality. It is difficult to imagine a life if you have nothing to model it after. I’d like to think in the wake of books like this one, and the ongoing feminist conversation, that we will see more women’s stories about different kinds of female protagonists, and that nobody, regardless of what gender they identify (or don’t identify) as feels left out.

Angels for Beginners, by Richard Webster

Menstruation and magick: Reclaiming the power of the body