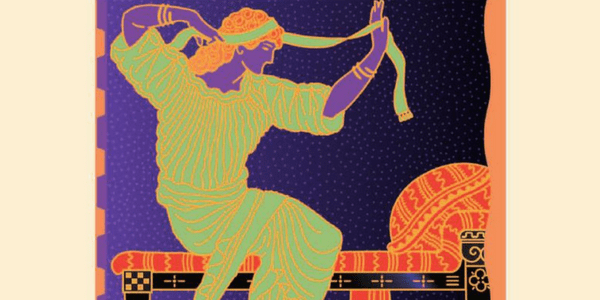 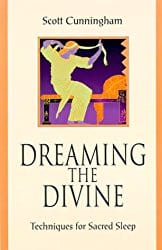 Dreaming the Divine: Techniques for Sacred Sleep by Scott Cunningham is a multilayered work that offers a thorough introduction to the practices associated with sacred sleep. What it is not is a manual on how to decipher your dreams.

Cunningham was an extremely prolific writer, his books are often recommended in a variety of occult situations, especially to people who are just beginning their journey. Despite that, I have never read a single one of his books so I went into this with no prior feelings on his work. As soon as I opened the book, I realized why he was so well liked. His writing style is easy to follow, upbeat and personable while still being academic and stuffed full of knowledge.

Before I get into the book itself, it might be pertinent to understand what sacred sleep is, as defined by Cunningham. Sacred sleep is a system of rituals and steps to prepare the body and spirit to receive communication from the gods. It is also a way to understand our dreams and read messages in the symbols we see.

Dreaming the Divine is divided into three parts. The first part, which is is the largest section, deals with the history of dreams in a variety of cultures. The book starts with the ancient Egyptians and flows through ancient Babylonians, Romans, and Indigenous people of North America. Though its scope covers quite a bit regarding certain cultures, it lacks any information for cultures from the Far East, South or Central America, much of Africa or even the Aboriginal people of Australia. This seems like a huge oversight as dreams and dreaming play a huge part in almost every culture around the world.

Despite what the text lacks in diversity, Cunningham provides ample footnotes and information on the source material for the cultures he does cover. If one were interested in finding out more about anything covered in the first section, it would be very easy to search out on your own.

The second part of the book deals with how to incorporate and perform your own sacred sleep ritual. This portion of the book takes the various practices that are discussed in the first part of the book and applies them to today’s Pagans, as the book puts it.

This section of the book reads as if it is the “meat” of the text, as it really outlines Cunningham’s ritual for engaging in sacred sleep. The ritual is well written out, with each step outlined in detail, including notes on any supplies that may be needed. It is a very thorough and in depth set of instructions on how to perform this sleep ritual.

Although the instructions were very clear and written out, it struck me that this entire section was only Cunningham’s sleep ritual. It is a hefty section of the book; however, it really is just one ritual, which was disappointing. Although source material from a variety of cultures are included in the opening — which could have led to multiple suggestions for rituals — Cunningham has taken parts of each and created one major ritual to follow.

The book encourages you to use this as a stepping stone to crafting your own ritual, but reading the text made me feel that the author strongly leaned toward the reader simply doing this ritual with very little deviation from what was written, save for those changes that would come from worshipping a specific deity.

The final section of the book dealt with how to keep a dream journal and how to begin sorting out your dreams for meaning. Again, this is not a dream interpretation book so you won’t find anything like, “Marching Ants: a sign you fear work related issues.”

What you will find is information on what symbols relate to certain deities. Instead of a more traditional book for symbols (with meanings based on psychology) Dreaming the Divine gives you instructions for creating your own dream interpretation book. This was perhaps the best part of the book for me because it spoke very strongly to individual practice. In fact, this was the one element of the book that I could see working into my own practice.

The remainder of the text is reference material, all of which is clearly laid out for the more curious practitioner to start their own research into the act of sacred sleep.

Overall this book is a strong read for people who are interested in working with dreaming in their practice. Although it has large blank spaces when it comes to diversity, it can be viewed as a starting place for learning. Even if you choose not to work Cunningham’s ritual, the information included in parts one and three of the text would likely prove useful to people curious about this practice.

I was disappointed by the lack of diversity and rituals in the book, but the strength of the writing and its clarity allows me to be a bit more forgiving about that. As a reference book, I think that Dreaming the Divine: Techniques for Sacred Sleep really shines, but it is by no means a definitive source for all that sacred sleep is and can be. I would recommend this book to people who are interested in sacred sleep; however, I would also recommend that they do not stop their study with this one text, and instead see it as a quick guide or stepping stone for further study.