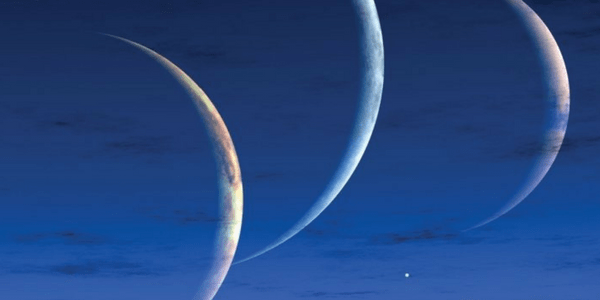 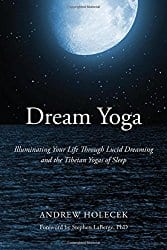 Dream yoga is one of the more subtle and fascinating elements of Tibetan Buddhism. Instead of going to sleep each night, to let the mind wander and either create dreams or to pass into a temporary unconscious oblivion, you can train yourself to wake up in your dreams and your sleep to continue your practice.

Dream Yoga by Andrew Holecek is not just about lucid dreaming — becoming aware that you’re dreaming within the dream and taking control of it — but it is about using the dream as a vehicle for spiritual understanding and growth, creating a time and place to meditate and understand the illusory nature of reality. Holecek writes, the “heart of this book is to show you that dreams can be used to remove suffering and achieve lasting happiness, which is one way to define enlightenment.”1 With dream yoga, you use your dreams to understand the nature of the self and reality, to explore how you perceive the world and learn more about it.

To say this book is only about dream yoga would be unfair on two accounts. First, the techniques and knowledge it draws from are broader than that.  Secondly, the scope of the book’s practice is not just about dreams. Holecek draws on Tibetan Buddhism, but also Western practices around lucid dreaming, psychology, and sleep research:

While lucid dreaming is more of a Western phenomenon, dream yoga, sleep yoga, and bardo yoga come mostly from Tibetan Buddhism. Our journey will unite both worlds, the best of the East and West.  ((p. 6))

I will admit this raised some warning flags; generally books claiming to unite east and west fail to do so, usually due to not understanding the east and giving preference to the west. I am very glad to say this was not the case with Holecek. Even though he started with western methods and psychology, it really worked well as a foundation for the Buddhist elements he was yet to introduce. It also worked well because while dream yoga is Buddhist it can be used by anyone. According to the Dalai Lama, “It is possible [to practice dream yoga] without a great deal of preparation.  Dream yoga could be practiced by non-Buddhists as well as Buddhists.”2

Holecek does a great job respectfully balancing Buddhist and modern Western thought. Traditionally, dream yoga was performed in several phases of the night, and Holecek draws on modern medicine to show how these phases mirror and make use of the REM cycle. Another example is a traditional exercise in Buddhism that involves finding a cave or canyon with an echo, and yelling at it, only to have it respond; Holecek points out that the same result is achieved with a recorded voice, which is far more accessible for most people.

Dream Yoga: Illuminating Your Life Through Lucid Dreaming and the Tibetan Yogas of Sleep also goes beyond dream yoga in the scope of practice. Dream yoga, in many ways, is a stepping stone to deeper practices of sleep yoga: remaining aware while asleep, but not dreaming; and bardo yoga, remaining aware in the process of dying and between lives. While bardo yoga is given only a small section, a lot of attention is devoted to sleep yoga, its importance and how to achieve it.

Despite my training and ordination in Vajrayana Buddhism, and as much as dream yoga interests me, I can say without reservation I suck at it.  I have next to no dream recall, which is the foundation of dream yoga, and can’t move beyond that. I’ve read and explored a variety of lucid dreaming books and dream yoga books to very little success.  My Rinpoche (a Buddhist lama of high standing), even told me that I shouldn’t worry about dream yoga in my practice, because it seems to be too difficult for me right now. While I would love to say this book has me up and meditating throughout the night, it does not. That said, working with the book I have developed more noticeable dream recall in the last few weeks, and I’m looking forward to hopefully having similar gains with the rest of dream yoga.

Whether or not you are Buddhist, if you’re interested in exploring your mind and your dreams, this is an excellent book to work with. A Buddhist will be able to take it farther, but even very Buddhist elements are explained in a way to make them accessible to non-Buddhists. It requires no more than a commitment to explore and understand. If you want to wake up to your dreams, and see beyond the illusions your mind is creating, then grab Holecek’s Dream Yoga as soon as you can.