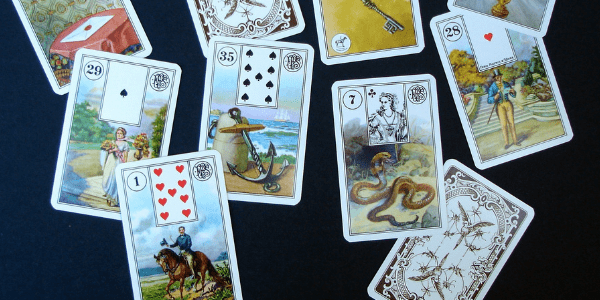 The mystery of Madame Anne Marie Lenormand and the Lenormand cards is a legend many cartomancers are familiar with. However, she remains a relatively obscure figure.

Separating fact from fiction can be tricky, as legends and mythologies tend to materialize around occult figures. We do know that Anne Marie Adelaide Lenormand was born 27 May 1772 in Alençon, Normandy. She was orphaned at the age of five and sent to a Benedictine convent school, where legend has it she already exhibited prophetic talents.

At the age of 14, she left Normandy for Paris, and as her reputation as a fortune teller and card reader grew, she offered advice to the Empress Josephine, Robespierre, and Tsar Alexander I. She was accurate enough in her fortune-telling that she was suspected of being a traitor or spy within the court and incarcerated more than once. She was also a prolific writer of esoteric subjects and published approximately 12 texts. Details of her life have been well gathered and researched by tarot expert Mary K. Greer.1

Occultism was rising in popularity during the 19th century, as was the visibility of women in society. In 1858, a mere 15 years after Lenormand’s passing, John P. Jewett wrote Remarkable Women of Different Nations and Ages and dedicated an entire chapter to her. Although Jewett discusses her alleged abilities, he also refers to her as “shrewd” and her clients as “unfortunates,” claiming that “…her own countrymen alone were not the dupes of her imposture.”2

To make this story even more complex, she apparently used many different cards, with a variety of symbols, flowers, mythological figures, animals, and numerological correspondences. These cards are thought to be Grimaud’s Grand Lenormand 54-card deck.

The Petit Lenormand, which is the 36 card symbol deck that I use and many others associate with Lenormand cards, are actually based on the Game of Hope, a parlour game created by German inventor J.K. Hechtel. Further, many researchers, including Greer, believe that the Petit Lenormand symbols were copied from coffee house cards found in Vienna in the 18th century.3 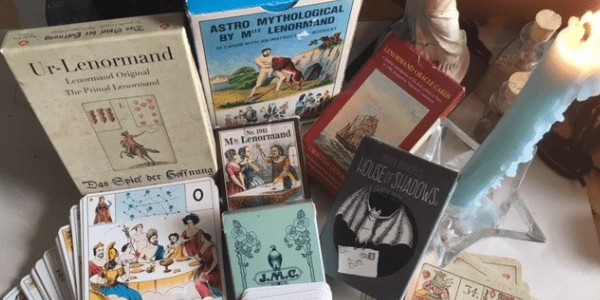 Reading with the Lenormand

Knowing this rather complex history has not swayed me in my love or use of the cards. I have been reading tarot and other oracle cards for more than 40 years, and I love many systems for different reasons. I have studied tarot and the ancient history of the cards, and use my intuitive abilities, along with the standard interpretations, to read, but Lenormand cards offer something different. They offer simple, to-the-point answers that are unequivocal to me.

I am a designer, and semiotics and symbolism have always been vital to me for visual communication. The universal language of a heart is fairly clear, whereas telling people who flip over the Lovers card that this card’s meaning is also about choice can be confusing.

This is not important for some readers, but I enjoy using the Lenormand in conjunction with tarot. With Lenormand, single-word symbols can become full sentences. For example, pulling the cards Sun, House, and Dog individually may read as “Joy, Home, and Loyal” which translates easily into “your home is filled with joy and loyalty.” It seems easier and quicker for my querents to understand Lenormand symbolism, which allows them to be more engaged in the process and subsequently feel empowered.

Related: Sortilége: A crow’s stash of divinatory odds and ends, by Monica Bodirsky

One key difference with Lenormand is the method of reading proximity. While this is done with tarot spreads to a certain extent, it is the primary methodology with Lenormand cards.

When using the grand tableau (literally, “big table”) spread, you shuffle and deal the entire deck of 36 cards. It’s daunting at first, but it literally gives you the big picture for a period of time that can span up to a year. Depending on the card symbols, which can reference finances, love, career, and health, you can see how they all work together in context. For me, proximity readings offer a holistic summary of a client’s situation and an unfolding narrative that is detailed and accurate. I use this system with other oracle cards, including tarot.

Other reasons to dip your toes into the Lenormand pond:

There are many Lenormand decks available and many spreads you can use. This style of reading provides an alternative to oracle cards, and is simple to use. Delve into the mysteries of Madame Lenormand’s fascinating cards soon and enjoy.

Related: Under the Roses Lenormand, reviewed by Psyche