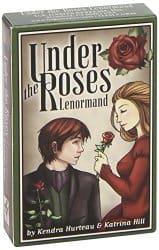 It’s only in the past few months that I’ve begun to play with Lenormand oracles, and it’s been a challenge to locate a design that I connect with, but I think I’ve finally found it with Under the Roses Lenormand. It’s illustrated with a subdued pallet, and the backgrounds are sepia toned, which allows the primary colours of the symbols to really pop. It has a kind of Victorian nostalgic feel that I really enjoy.

The Lenormand oracle is named after Marie Anne Le Normand, a 19th century French  celebrity fortune teller. Though she never used the cards herself, she did popularize cartomancy and fortune telling in general. This deck also takes its name from sub rosa, a Latin metaphor meaning “under the rose” that refers to buried secrets — an apt name for a divination deck.

It’s a Petite Lenormand, but an unusual set, as there are 39 cards, and Lenormand packs are typically consist of 36 cards. However, the accompanying booklet notes that the additional three cards are not intended to be used in readings, but are included to serve as alternates. There are two cards each for the Child (13, Jack of Spades), the Gentleman (28, Ace of Hearts), and the Lady (29, Ace of Spades), each featuring white and Black figures. As oracle sets are often dominated by white figures, it’s nice to see some representation of other ethnicities in the cards, and even outside these substitute cards, not all figures depicted in this pack are white.

The accompanying booklet provides keywords and a short phrase for each card, which are traditionally read analytically, rather than intuitively or metaphorically, as with most systems of tarot reading. It offers basic techniques, and later suggests more advanced techniques for those who are already well experienced with the Lenormand, as well as online resources for coming to a deeper understanding of the cards and how to use them.

Within the booklet are simple two card, three card, and five card spreads. It also introduces the Under the Roses Spread, and a nine card spread, before moving on to the Petite Tableau (an 18 card spread), and the Grand Tableau (a full 36 card spread) in several variations.

The cards are a lovely size for shuffling. Lenormand cards are generally smaller than tarot cards, which makes it easier to arrange a Grand Tableau, which uses the full deck. As the booklet recommends, I took out the three duplicate cards, and decided to remove the white people — it’s not as if we’re lacking for representation — and did a few simple three card readings. It gave me a chance to look closely at the cards, and appreciate the design and detail. Behind each card, all but obscured by the primary images, are keywords denoting each card’s meaning. Another handy aid for those, like me, who are still learning to read the Lenormand.

Under the Roses Lenormand is a charming and inviting deck, and has since become my go-to for Lenormand readings.