Few scant references to the blend exist before the 1800s, including countless lists of similar herbal preparations found in medical histories documenting the bubonic plague in 14th to 18th century Europe.

Our story begins in this world of many deaths, of mass burials, and of the people who survived: thieves and plague doctors. The recipe and the origin story of the Four Thieves blend varies from person to person though most accounts tend to point to Marseilles, France as the point of origin. Legend has it that after ingesting a vinegar thick with herbs to keep away the plague and other spirits, the four thieves of our story would dig up the bodies of plague victims buried earlier during their “day job” as gravediggers to empty them of any precious items.

The vinegar worked so well that after they were caught, local officials negotiated the thieves’ freedom on the condition that they share the recipe that kept the plague at bay. This recipe supposedly included one herb from each thief and my best guess is that this original mix probably included garlic, rosemary, lavender, or sage, the most common herbs found in the mix. Also known as Marseilles Vinegar, the blend was also found in doctor’s kits, specifically the plague doctors who filled their beak-like masks with the herbs of the four thieves to guard from spreading disease.2

The move towards magick

Today, the Four Thieves blend is used for magical purposes as much as health. In the southern United States, many traditional hoodoo workers make this blend to shake off unwanted energies, keep thieves away, or protect a person from harm. The late 18th century saw a wave of French immigrants fleeing their own revolutionary war, and with them came their salad and dressing traditions, and perhaps, the mythology surrounding the four thieves blend.3 In addition, peppercorns and pepper make their way in to the American flavour of this blend. For example, Luisah Teish uses peppercorns in her book, Jamabalya (1988) in a spell to guard against slander. The magical blend is a curious mix of culinary, medicinal, and mythical influences. 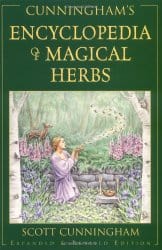 Looking at some of the herbs in these blends we can see why they are magically potent. Scott Cunningham‘s Encyclopedia of Magical Herbs (2000) credits cloves with protective qualities, driving away hostile forces, the ability to purify an area, and stopping gossip. Rosemary is also protective and purifying, and if placed above a doorway or window, it will deter thieves. Garlic protects in general and is anti-theft in addition. Rue will break hexes and protect the home. In England, lavender bonfires drove away the spirits of the plague.4 Clearly, these herbs protect against thievery and dishonesty.

It is common today to find this blend in the form of an essential oil concentrate or spray for use in surfaces and the body. Creams, oils, diffuser and lip balms are all popular ways to use Four Thieves oils. These are very versatile in that they smell better than the vinegar in general, and can be applied for magical or therapeutic purposes nearly unnoticed in daily life.

Lip balms are easiest to hide, but cast a quick protection spell by dabbing the oil in the shape of a pentagram on your body. You can also use it to anoint a car, doorway, or, loved one, Used therapeutically, it can replace “anti-bacterial” gels or sprays, and is great on road trips not only to protect and “hide” your vehicle, it can replace soaps for dishes, hands, and faces.

You can use the vinegar to protect homes or vehicles by drawing protective signs and symbols on doors, windows, etc. Experiment with the placement of these if the thieving continues. Your kitchen counters aren’t the only things that are easily cleansed with the vinegar, as you can also use it in ritual cleansing. Try anointing people or pets for protection; the vinegar or oil will work for this purpose. And, aromatherapy can be used in lieu of incense smoke to clear a space.

For all its benefits, Four Thieves is an easy blend to concoct in your own kitchen, whether you choose the vinegar or the oil. I normally make a batch of each so I have internal or external magical or medical applications. Four Thieves vinegar recipes vary, but if you’d like to honour the supposed four thieves, use only four herbs of your choice. In my opinion, garlic should be included for its long-standing health properties, as well as lavender honouring its origins in France, and rosemary and clove round out the antiseptic and antiviral properties we need for this to be a medicinal treatment. As well, this blend is very potent and tastes astringent and floral, with some bitterness, rounded out with the taste of vinegar. A savoury recipe (i.e. for salad dressings) uses garlic, thyme, rosemary and lemons. This honours some of the Italian herbs of protection and kitchen magick, and steeped in red wine vinegar, this is excellent with olive oil on salad, pastas, breads, and olives or cheese.

Choose herbs appropriate to your magical or medicinal goals or accessibility. Of course, if making the vinegar for magical purposes, use as many foul herbs as possible to amplify its potency as a ward against thieves, disease, and gossip. If making a kitchen blend, orient toward health and flavour. 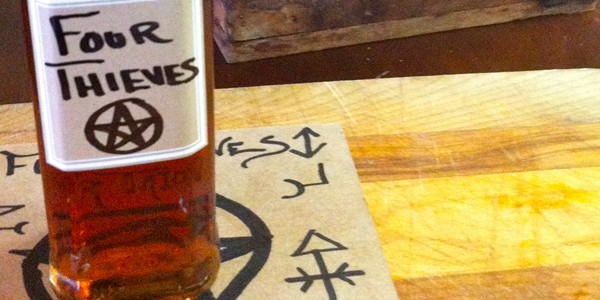 Making the vinegar is much easier than choosing which herbs go in your recipe. It is best to use fresh herbs, equal amounts of each, and tradition calls for wine or cider vinegar. Clean all jars and lids by boiling in hot water to sterilize. When filling jars, go all the way to the top. When you seal the lid, it will create an anaerobic environment free of moulds and bacteria. Essential oils by nature are anti-fungal and anti-bacterial (among other properties) aspects of the plant and will not mould when mixed with other essential oils in a blend.

I often set this blend up on the night after a full moon to harness the powers of the waning moon. This usually means I strain and bottle this blend on a new moon, under cover of darkness like any good thief. 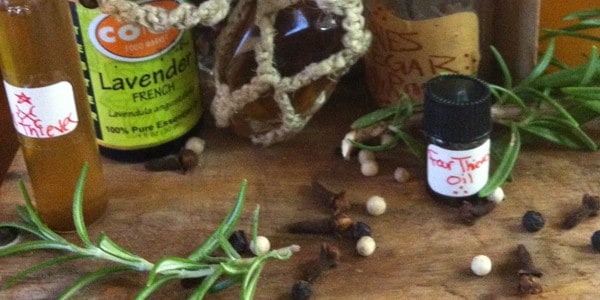 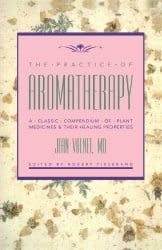 Making an essential oil blend5 is even easier than this. Garlic is left out of this version, since many folks use Four Thieves in diffusers and sprays to both cleanse and scent a person or space. Today, eucalyptus and cinnamon have become standards in blends geared toward heath and wellness. One of my favourite blends is to use lavender,clove, lemon, thyme and rosemary.

This oil can also be used in salve making as a topical antiseptic, or used in diffusers for clearing the air in a room. Instead of diluting with a carrier oil, the concentrated oil can also be put in spray bottle with water and vegetable glycerine to be used as a hand sanitizer, room or surface spray.

The rest is history

The muddled origins of the Four Thieves mixture lend it credibility for secrecy, protection, and any magical work related to thievery or getting out of a tight spot. While we might never uncover the actual history, the myth supplies all the information we need to understand either the health benefits or the magical properties. This is a potent blend to deter both thieves before the fact and to magically respond to theft in general. Since, so much lore surrounds Four Thieves, it is easy to create a blend that is uniquely your own, tailored to your needs and purposes. Create your own mythology around your own personal blend, and in keeping with the centuries old tradition, try not sharing your personal recipe, even with family or friends. The mystery adds a power all its own.