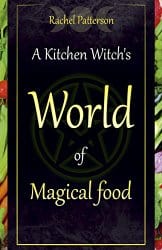 After reading Rachel Patterson’s newest book in her Kitchen Witch series, you just might be inspired to give your kitchen a magical makeover. Not only is she a veteran author of five books on magical food, she is High Priestess of the Kitchen Witch Coven and an elder at the online Kitchen Witch School of Natural Witchcraft. With touches of cheeky humour, she describes readying the kitchen and cooking equipment for magical work, seasonal and holiday recipes, magical food for intent, correspondences of various sorts, food for the moon cycle, and food spells. Think “Engagement Chicken” (Glamour magazine’s famous recipe for inducing a man to propose) taken to a whole new level!

And yes, the book does include magical recipes using meat. In the opening pages, Patterson explains how to choose and eat meat that has been raised humanely. “For those of us who choose to eat meat I wholeheartedly believe that we should honour the animal that gave its life,” she writes, adding every part of the animal should be used, including bones, skin and feathers. I applaud Patterson for making this point; it is a nuance often lost on those who believe eating meat is unethical and inhumane. Taken a little further, I can imagine powerful magical workings using meat around healing our inhumane factory farming system.

Patterson begins at the beginning, with readying the kitchen before cooking. Cleaning; blessing appliances, pots and pans; and setting up a kitchen altar are all part of the process. She suggests dedicating your kitchen space to a god or goddess, or in some way connecting it to the divine.

Next she discusses seasonal eating; that is, making the foods grown in your area the major part of your diet during a given season. Not only is the food less expensive, it’s of generally better quality than if imported from somewhere else when it’s out of season. Here Patterson includes the sabbats and their traditional foods, with one or two recipes for each and magical uses of their ingredients. For instance, she tells us traditional foods of Mabon include bread and cakes, and gives us a luscious recipe for gluten-free lemony drizzle cake. (Patterson is quite fond of cake; it’s a recurring theme throughout the book.)

Eating with the moon cycles is something that never occurred to me before I read this book. Patterson describes the foods that will support us best during each monthly cycle, and also during the seasonal moons, pointing out that we will eat different foods on a summer full moon than a winter full moon, for instance. She gives a recipe for each cycle; for full moon she recommends eating something hearty and extravagant, such as pulled pork, and for its opposite, new moon, she recommends light and healthy, or even fasting.

A chapter on food for magical intent is comprehensive, with recipes for each intent, food colour correspondences, and correspondences for everything from grounding to sex and love. For fertility she offers a baked egg custard recipe, for grounding a potato bread recipe, and for love — what else? — chocolate truffles.

Patterson includes a chapter on basic recipes for such things as scones, bread, and pizza, to which you can add ingredients for the type of magick you’re concocting. There’s some information here about composing herbal bags, poppets, charms and offerings from food as well. I tried a recipe from this section: apple cider vinegar flavoured with thyme. After letting it sit for a little longer in my cupboard than the prescribed time of one to three weeks, I tried it in red lettuce and chicken salad — delicious! It had a tangy bite and the thyme flavour came shining through.

This leads nicely into a chapter on food spells, with instructions on how to compose a honey jar to “sweeten someone up,” an apple spell for a happy home, and an oven blessing spell — handy in preventing burns!

There’s a giant chapter on magical correspondences for individual ingredients, listing magical properties, ruling planet, element and gender correspondences. In fact, the whole book is full of correspondences, one of its strengths. It is an outstanding encyclopedic reference (yet it could use a recipe index, something I believe every good cookbook should have). About halfway through this chapter I was dizzy with information and prayed hard for some correspondence charts.

And there they were, in the next chapter, with charts on planet and energy characteristics, intent by food, planet by food, element by food, and a chart of food and gender correspondences. This chapter is followed by one on measurement conversions of all types, and even gives a small handy chart listing the various names some ingredients have in different countries. Patterson admits she loves cooking and you can tell: only a foodie author would cover all the bases this way.

She writes that her heart is that of a kitchen witch. That is obvious. Anyone who has ever eaten a home-cooked meal filled with love can feel the “spell” the cook has cast — even if the cook is not a witch. For the practicing witch, A Kitchen Witch’s World of Magical Food is like a culinary grimoire, waiting for you to write your own spells in the margins.