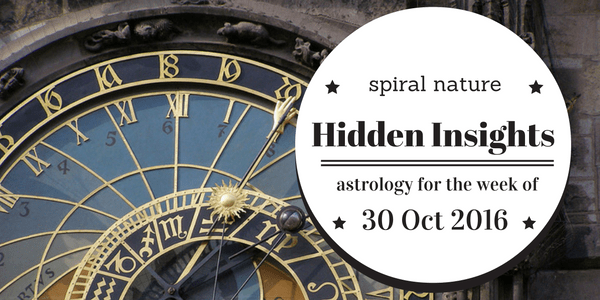 We start the week off with hidden insights in the new Moon in Scorpio. Every sign gets one new and one full Moon a year, and each one acts as an important marker if it’s in your sign. But we are all affected by the cycles of the Moon. The sign it’s in will indicate the attributes and energies that lunar cycle will carry.

And so the day before Samhain — a sacred day for those who move throughout the Great Wheel — the Moon begins anew under the seductive, mysterious sign of Scorpio. In last week’s column, we talked about Scorpio’s otherworldly connections. This is a time when the veils between the spirit world may part more easily. It’s a potent time for magick, shadow work, and personal transformation.

Scorpio is symbolized by the scorpion, but it is also connected to the snake and the phoenix, two creatures that embrace the power of reinvention. The snake sheds its skin, knowing that it must let go of the old in order to become new. And the phoenix always rises again, knowing that what may appear to be a dramatic ending is just another part of the cycle.

Death and rebirth are major themes for Scorpio, and so this new lunar cycle can bring some complexity with it. But remember that it doesn’t mean everyone is going to experience some kind of abrupt end or break up in their lives. Passion, charisma, psychic and occult knowledge, secrecy, solitude, and magnetism are all Scorpio traits.

Transformation isn’t something that we have to passively let happen to us; this new Moon brings the opportunity to be proactive and intentional about what this Scorpio energy might be able to shift and change for you.

When we begin to work with the astrological energies that are available to us, we are less likely to be caught off guard by any intensities they bring up.

So set an intention today, and focus on it throughout the week as the Moon waxes.

“It is worse to stay where one does not belong at all than to wander about lost for a while and looking for the psychic and soulful kinship one requires,” Clarissa Pinkola Estés wrote in her iconic book Women Who Run With the Wolves, and this is the type of advice I see you heeding in the coming weeks, Aries. While those around you might choose to wait until New Year’s to make a life-altering resolution, I see your trademark impatience acting to your advantage, pushing you towards glorious risks and eccentricities. No longer can you wait for your life to happen. There is something that you now need to rush ahead with.

“…Think magic. Think delight. Think fun. Do not think duty. Do not do what you should do — spiritual sit-ups like reading a dull but recommended critical text. Do what intrigues you, explore what interests you; think mystery, not mastery,” writes Julia Cameron in The Artist’s Way. This is the type of guidance I think you’ll thrive on this week, Taurus. You might feel a certain heaviness in the coming days where your usual spark feels weighed down by responsibility and obligation that think you “should” do, rather than what you actually “have” to do. It’s important to be conscientious, but don’t dim your own light in the process.

“Like those in the valley behind us, most people stand in sight of the spiritual mountains all their lives and never enter them, being content to listen to others who have been there and thus avoid the hardships,” writes Robert M. Pirsig in Zen and the Art of Motorcycle Maintenance. For you, Gemini, I see you standing knee-deep in Scorpio’s intensity this week, travelling through the deepest parts of your own psyche to see what paths you are ready to take next. There is a route you know you need to get on, and your inner compass is about to point the way.

“Everything is created twice, first in the mind and then in reality,” writes Robin S. Sharma in The Monk Who Sold His Ferrari. What are you creating right now, Cancer? There is something new taking shape in deep down in your heart, but it might be something so soft and fragile — so embryonic — that you could be quick to dismiss it as just another passing thought. Pay close attention to your dreams in the coming weeks, as well as to any synchronicities. I have a feeling the universe is going to be dropping some hints to help you see what you need to bring forward next.

“Don’t cry, I’m sorry to have deceived you so much, but that’s how life is,” wrote Vladimir Nabokov in Lolita. Do you agree, Leo? I wouldn’t suggest that you do. You do have a lion’s roar, but have you been using it to its full capacity? If not, I think you’re going to find that it’s time to borrow from Scorpio’s sting to help you weed out someone who is holding you back. You’ve got a big heart, but it can get you in trouble sometimes when you’re willing to put up with some of the negativity that comes your way. Change the dynamics of your relationships and you’ll change the momentum of your life.

“Don’t judge each day by the harvest you reap but by the seeds that you plant,” Robert Louis Stevenson said. You might want to carry this quote around with you in the coming days, Virgo. You do have a tendency to be harder on yourself than the average person, even if that’s not a trait you often show. I see that internal pressure building this week, but it’s not there to make you feel bad about yourself. Instead, I see that, if you use your energy wisely, you can have an intensely creative burst. For you, spring can arrive in October, but remember that every garden starts with just one seed.

“What you do makes a difference, and you have to decide what kind of difference you want to make,” Jane Goodall once said, and I think this is wise advice for you this week, Libra. Your words have weight this week, and people are going to be paying extra attention to what you have to say. So use your power for good and be the one who says something memorable, inspirational, and important. It doesn’t mean you have to bite your tongue, but do be mindful that whatever you express this week has the potential to reverberate out into the universe for some time to come.

“Everyone seems to have a clear idea of how other people should lead their lives, but none about his or her own,” Paulo Coelho writes in The Alchemist. Scorpio, you are always tuned into the heart of the matter, and I think this week you’ll be able to take some of your own best advice and put it to use. What are some of the brilliant ways you’ve advised others? Make a list of your Top 10 tips and take a look at whether it’s time you put a few into practice yourself.

“A reader lives a thousand lives before he dies,” writes George R.R. Martin in A Dance with Dragons. What kind of life are you ready to live this week, Sagittarius? I see a new possibility opening up for you in the realm of words. It might start with a great book, or an essay that seems to crack you open in a whole new way. Language is particularly potent magick for you these days, and information is going to be your gateway to the new beginnings that are waiting for you in the months ahead.

“I never made one of my discoveries through the process of rational thinking,” Albert Einstein said, and I think this is highly practical advice for you this week, Capricorn. Life has been full of surprises for you this year, but this week brings you the opportunity to be the one to initiate spontaneity. Your creativity is going to be asset for you in the coming days as you realize that it’s time to take control of your reality in a way you didn’t think was possible before. But this isn’t something you can tackle with old ideas or tried-and-true methods. You really do have to work with a blank canvas this time around, a little experimentation will go a long way right now.

“When we hope, we usually hope for the wrong thing,” Dean Koontz writes in Brother Odd. What’s your hope directing you to this week, Aquarius? Pay attention to it, because it’s showing you a new, better way forward. To me, this week feels like a bit of a second chance for you. You squandered some of your precious time and energy this year on something that couldn’t quite meet your expectations. But now, you’re beginning to see that you can salvage some of that energy. It’s not over yet, Aquarius.

“Each of us has his own way of emerging from the underworld,” Franz Kafka wrote in Letters to Felice. This week, Pisces, I think you’ll start getting some important insights about yourself that will show you your own unique pathways out of the underworld – though you might be quite willing to stay there a little longer. There are some important subconscious shifts taking place for you these days, ones that may at times feel unexpected, but not always unwelcome. You know what you need to be working on right now, and if ever there was a time to go deep, this would be it.