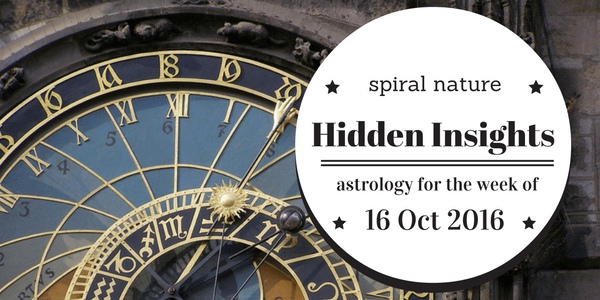 Alchemy is the word that keeps coming to mind for me this week. What hidden insights can these upcoming transformations give way to?

We start with a fiery full Moon in Aries conjunct Uranus, the planet of evolution and revolution. In astrology, Uranus is where the soul finds liberation. It brings us the opportunity to reshape reality. Connected to the third eye, Uranus also represents unseen worlds.

And what happens when the Moon is full? Our shadows are illuminated. Opposing the Sun — the bringer of light — the Moon finally helps us to see what’s been lingering in the dark. Full Moons can feel intense because they can bring up buried or repressed sentiment, or push us towards introspection.

Uranus is also in Aries right now, in retrograde. Its current backspin is underlining the need for intense reflection right now; Uranus’ revolutionary influence is going to be manifesting within right now. As the Moon and Uranus meet up this weekend, the Moon might wake up something inside of you that needs a dramatic change. You might realize that you need to commit to something in a greater way, or shake things up altogether.

With such a fiery Moon, we must be careful that it doesn’t lead us towards impulsivity or insensitivity — caution is not a typical Aries trait, so be careful of any missions you undertake at this time. Fire can quickly get out of control, so make sure you can contain it. This Moon isn’t about recklessness, but radical purpose.

Mars and Pluto are also conjunct. Mars is Aries’ ruler. It’s the planet of war, but its influence goes well beyond the themes of anger, aggression, and assertion that we typically associate with Mars.

The important thing to remember about Mars is that it’s a planet that helps you decide where you stand in this world. Its confident drive is what pushes you to solve things.

Pluto is the underworld, the subconscious. It represents our personal power, but forces us to access that power through transformation — cycles of death and rebirth. Pluto’s influence on us is slow — it takes its time — but its presence is powerful all the same.

What happens when Mars and Pluto meet up? What happens when a planet of confidence and willpower meets with the planet of change? There is a chemistry between these two that feels deliciously unpredictable to me, as though this week may bring a pivotal turning point that begins from within.

And so why does all of this have me thinking of alchemy? Because I think it’s a week where you have the chance to transform and transcend, particularly as you grapple with aspects of your life that perhaps have been feeling a little too basic for your needs.

Here’s a look at what’s coming up for your sign throughout the week ahead.

Purification through fire: That’s what this week means for you, Aries. At times, this world might not feel big enough to contain you. The multitudes that exist within you might start to feel so vast, so expansive, that you won’t know what to do with yourself. “The heart is an organ of fire,” Michael Ondaatje wrote, and that’s a thought I would like to suggest you use as a guide throughout the week. What’s your heart setting fire to? What’s burning out of control for you? Those flames may need to cleanse through destruction, or passion – it’s up to you to decide. Just remember that fire is your true nature, Aries. Don’t fight it.

Alchemical symbol for the week: Iron

Purification through compassion: What’s your definition of enlightenment, Taurus? This week, I think don’t think it’s going to come from unseen forces or mystical experiences. Instead, enlightenment is going to be found in the mundane, everyday happenings all around you – but you’ll need to be a driving force behind the beauty that occurs. This is a week for you to extend yourself through small miracles. Hand out pennies to strangers and ask them to make a wish. Compliment someone every day of the week. Offer an unsolicited helping hand to a friend who needs it.

Alchemical symbol for the week: Copper

Purification through language: Words are spells for you this week, Gemini, so choose them wisely. Your ideas may become manifest much faster than you think. Be purposeful with your thoughts and the actions they translate into. An exercise that might be interesting to try this week is to create a powerful thought — and perhaps some words of power — to keep you focused throughout the week. What do you want to make happen right now? The universe is waiting for an answer. Write it out as a clear, single sentence, and make it your new mantra.

Alchemical symbol for the week: Platinum

Purification through action: “Who am I?” I see this question coming up for you this week, Cancer, but not in an existential crisis kind of way. Instead, this question will be surfacing because you’ll be surprising yourself with the strength and assertion you’ll be expressing this week. Truth be told, I wouldn’t want to mess with you, and no one else should, either. Like I mentioned in this week’s overview, there are some pivotal shifts waiting to happen, and I think you’re going to be one of the signs that feels them the most.

Alchemical symbol for the week: Antimony

Purification through restraint: Leo, there are some unpredictable elements in our skies this week, and we’ll all have to work at using them wisely. Otherwise, if we get too caught up in it all, we’ll end up acting too fast, too soon. I know, I know. You’re already thinking, “No regrets!” But out of all the signs, I think you’ll be most prone to impulsivity this week. Those who know you love you for your eccentricity and unconventionality, but this week you might push those qualities a little too far. Be careful not to burn bridges right now. Use your powers creatively and constructively and you can really turn heads – for the right reasons.

Alchemical symbol for the week: Silver

Purification through water: There’s a strong theme of self-care running throughout the fall season for you, Virgo, and I think this week brings some key moments for deep healing. Would you be game for performing a small self-care ritual for yourself? Gather up six white candles, bergamot essential oil, and some camomile tea. Boil the water for the tea, and breathe in the steam as it steeps. With every breath, think of what you need right now – healing, calm, relief, peace, clarity. When you feel you’ve focused your intention enough, run a bath. Set the candles around the tub. In each corner, drop some essential oil, and then add the camomile tea to the bath, along with any soaps or suds you like. Soak at your leisure.

Alchemical symbol for the week: Arsenic

Purification through ascension: Your soul needs you this week, Libra. We’ve still got time before the Sun leaves your sign and brings us all into Scorpio season, but I think you’re going to be feeling the pull of Scorpio’s darker overtones a little early. Shadow work, meditation, channeling, or practicing any kind of divinatory art this week can help you to tune into some deeper messages that your soul is trying to send to you. There is something calling you home right now. Answer it.

Alchemical symbol for the week: Magnesium

Purification through evolution: Remember what I was saying about this week being one of radical purpose? I think you’re really going to be feeling that, Scorpio. Out of all the signs, this week feels the most unsettled for you, though that’s not mean to sound ominous. Don’t blindly lash out at whatever opposes you right now; instead, ask yourself how you can move beyond it. Are the challenges and uncertainties you’re facing at this time ones that you need, or can you walk away from them altogether? I think you’re going to realize that you are much freer than you think you are. Rise up.

Alchemical symbol for the week: Lead

Purification through creation: This week’s full Moon is igniting something within you that can become the basis for your future foundation. What will you build, Sagittarius? If you’re not sure, this past year has been dropping plenty of hints. Some of the constraints to your energy might start to feel like they’re lifting a little this week, and the added optimism that will bring can boost your creative core. Some seeds are being planted this week that can take shape once 2017 rolls around.

Alchemical symbol for the week: Gold

Purification through initiation: What rite of passage have you lived through this year, Capricorn? I think it’s time to recognize that you’ve come out on the other of something. What have you become as a result? You might not typically think of yourself as a shapeshifter, but your identity has taken on some new aspects in recent months. Why not fully initiate yourself into this new life that’s rising up around you? Recognize what you’ve passed through this year, and what you’re becoming as a result. If it helps, do something purposeful to mark this change. Take yourself out for a drink – alone – or a walk in the woods, moving through the world as the person you’ve become, not the one you used to be.

Alchemical symbol for the week: Phosphorus

Purification through truth: If anyone has permission to go rogue this week, it’s you, Aquarius. Though your rebellion may be against yourself right now, don’t fight what you’re feeling. This week’s full Moon can have a particularly potent effect on you that can drum up some important admissions about what’s working for you and what’s not. While I don’t see that these are going to feel particularly surprising (we often know what we need to do, don’t we?), I do think that you’ll feel much more urgency around addressing what needs to be said and done.

Alchemical symbol for the week: Zinc

Purification through knowledge: What wisdom are your harbouring, Pisces? It’s time to look at what kind of intellectual treasures you’ve amassed over time and put some of that knowledge to use. You know a lot more than you realize, and this week is going to give you a window of opportunity to start to delve into your own spiritual wisdom. What lessons can you start applying to your daily life? How might you one day share your own intuitive, magical teachings with others? It’s time to start committing to your philosophies so that you can inspire others to do the same.

Alchemical symbol for the week: Sulfur