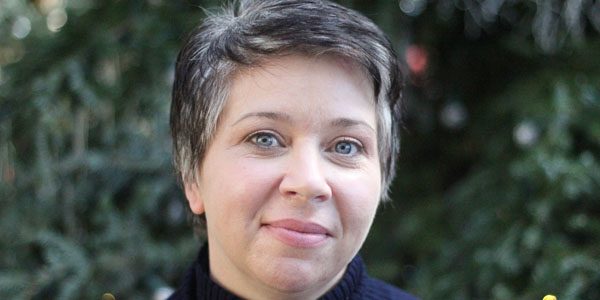 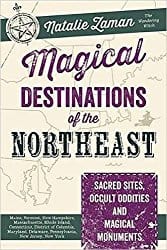 As soon as I cracked open Natalie Zaman‘s Magical Destinations of the Northeast, a dotted line appeared on the “praise” page — a mysterious entry into a book. Intrigued, I turned to the next page, and to my surprise, discovered a little flying witch in the lower left hand corner. She captured my attention, so I followed her flight. The flying (wandering) witch traverses across the entire guide, her position changing the more the pages are turned; by the end she’s travelled across the entirety of the book. A visual metaphor for Zaman’s travels? Most likely. This is one of many clever design elements which makes the book so aesthetically appealing, perhaps the most captivating (and charming) of all.

With more than 400 pages packed with pictures, information, and ritual, it is a magical, mystical travel guide. Zaman wrote the book to be utilized as a hands-on guidebook, a traveler’s guide. Not only does she provide magical destinations, but information on Native American heritage sites,1 spells, rituals, and the magick of each state’s flora, fauna, gems, and minerals.

If you’re a wandering Pagan, enjoy a good spiritual journey, or just want to know more about all of the occultnik things the American Northeast has to offer, then this is a great book for you!

Autumn‘s chill blew in along with steel-gray storm clouds, threatening rain — but holding off. I walked through the white wooden door, overhead bell jingling. Right away, Natalie Zaman’s smiling face and warm aura greeted me.

Magical Destinations of the Northeast grew out of Zaman’s “The Wandering Witch” column for Witches & Pagans magazine. which documents her travels to sacred sites and places of magick in the United States of America and the United Kingdom, as well as her own fun family travels.

Syndee Barwick: Congratulations! I’m so excited for you! I read the entire book, and all I can say is wow! What was the inspiration for the book?

Natalie Zaman: Thank you! I’m pretty excited, too. I’d been writing “Wandering Witch” for Witches & Pagans magazine for a few years, and I really loved writing about magical travel. Then in 2013, my family and I went on a cross-country trip. We drove from New Jersey to California, then down the California coast, and then back home though the southwest. I’d never seen the country like that before; it was really a magical journey.

One of our stops was Devil’s Tower in Wyoming. It wasn’t something I didn’t necessarily want to see, but was happy to stop — and I’m so glad we did. It’s a National Park and we were there at the end of June, but there was no one there. We walked around the mountain alone. It was so quiet! I’m a city girl, but there was no sound except the wind in the trees — no planes overhead, no cars on the road.

There were prayer bundles in the trees and the whole place smelled of incense and flowers; it looked like the area was burned off (a Native American practice used to encourage new plant growth). It was one of the most profound experiences I’ve ever had. I wondered why no one was there, and I thought, “I wish I could tell people about this place, and other places…” and the idea for what would become Magical Destinations was born.

I’m so glad that idea took root and grew! But the idea is just so big, how were you able to tame it? How did it gel? What part came first?

I wanted to do something that showcased the whole country, so I think the plan came first. I knew I wanted to talk about sacred sites, but I also wanted to be a venue for local practitioners to have a voice, because whatever research I could do, or whatever I could capture of a place, there’s nothing like the voice of someone who’s from there or who’s lived there. Then I remembered this extra credit project I did in grammar school where I made this kind of mini encyclopedia that listed all the states and their capitals and symbols. I thought it would be cool to explore the magical properties of some of the state emblems.

It adds even more layers to an already rich book. Why did you decide to focus on the Northeast?

When my agent and I proposed the project, it was going to be one book with all 50 states. There would be two sites for each state (one natural, one made by humans), the esoteric properties of the state symbols, and what would become “Stop by for a Spell” with local practitioners contributing a spell or ritual that was “of that state.”

Llewellyn was interested, but they wanted to expand the idea, to do more sites to give a better picture of what each state had to offer. We worked with the sales force to divide the country up by region. They decided to do the American Northeast first. If I get to do the whole series (crossables crossed!), the next book will be the West, followed by the South and then rounded out with the Midwest.

Once they read about the Northeast, they’ll want the entire country’s magick mapped!  How did you choose the places to visit and to include? There are just so many places (and will there be a volume 2 of the Northeast, because hey, we live in the Northeast)? 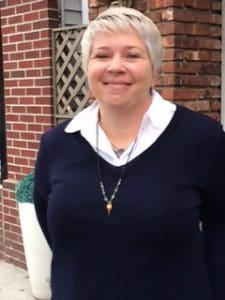 I started with what I knew, and then did Google searches using all sorts of words to try and describe the kind of places I was looking for example: spiritual New Jersey; occult New Jersey, witchy New Jersey, unusual New Jersey, odd New Jersey, etc.2

When my agent pitched the project, we called it, “Weird NJ meets the spiritual traveler.” I wanted each place or event I included to have some “magical” aspect to it — and I tried to keep my mind as open as possible about this, because magick can mean many things to many people.

Every state has lots of weird and eerie places — that doesn’t necessarily make them magical. It also isn’t a book about haunted places, even though I’ve included some haunted places. After I turned in the first draft of the manuscript, we honed the content, adding sections dedicated to magical monuments, and bewitching tidbits to include cemeteries, personalities, folklore, and history. There were sites I had to cut to make room for more variety — that was hard, but it had to be done because I had a limit to how big the book could be (the bigger the book, the pricier it would be).

I’m not sure what the future holds for Magical Destinations of the Northeast. Right now I’m hoping the book does well enough so that I can finish the series. If the whole thing does well then maybe I can do an expansion — crossables crossed!

I think I’ve been to about 85% of the sites in the book. Some were familiar to me, but many were new. There just wasn’t enough time to actually go to them all, especially as many were added after each edit round. The street view and earth view of Google Maps were really helpful for this. You can see the Westford Knight on Google Maps (type in “The Westford Knight” and switch to street view). I also talked to lots and lots of people.

From start to finish, I think the whole thing took me about two years. We made the trip in the summer of 2013, and by the following year I’d written the proposal with the help of my agent. I believe we sold it by May of 2014. I got right to work and didn’t stop adding and fixing and adjusting until it went to print in August of this year, 2016. That includes all the research and traveling. It was a busy time!

What did you discover about each state’s magical destinations that surprised you the most? What preconceived notions did you have about different states and spots that were “blown?”

I think what was surprising was the variety of places that exist in every state, but the one that really blew me away was Connecticut. Hopefully Connecticut-ers will forgive me for this, but until I worked on Magical Destinations, I hadn’t really explored it at all. In fact, it was, for many years, the state I passed through to get to Massachusetts, which is terrible because Connecticut is an amazing state that’s full of treasures.

The most meaningful discovery for me was the gallery of Pamela Colman Smith artwork in Gillette Castle State Park.  It’s just sitting there, quietly, waiting to be seen. Connecticut also has a vast and rich Native American history. I loved visiting the Beinecke Library (go see it!) and watching the sunrise over Lantern Hill with Morris dancers at the equinox. So much variety!

Ha! I’m originally from Connecticut, and yes, it can be easily overlooked. So many of the places you visited (and documented) are familiar to me, and some not. Even people from Connecticut haven’t explored Connecticut.

I also think that’s true of any state or area in which we live. We just take it for granted or are just too busy with our daily lives to take a break and search out these cool places.  That’s why I love this book. There are so many new and surprising stories, as well as spots I never knew existed. The book is a great guidebook, a fascinating wealth of information!

Thanks! That’s my overall goal. I really hope my work connects people to places, as well as other resources to dig deeper if they want to keep exploring.

Before we wrap up, can you tell everyone what appearances you’re making in conjunction with the launch of Magical Destinations of the Northeast?

Of course! My appearances are updated on my website under Let’s Meet Up.