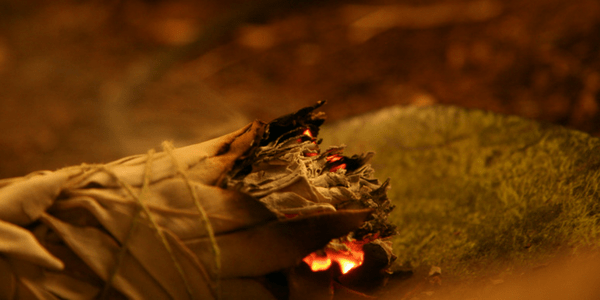 I came across a very interesting article from Shaman’s Drum which was reprinted for Vision Quest Bookstore. I will attempt to convey the gist of it, along with my views, as a student of the Ways of the Teneh, about it.

Smudging is a way of using the smoke from burning herbs as a way to cleanse the body, an object, or a given area of negative influences. I myself use smudging to cleanse crystals before using them in jewellery projects I may do, and for protecting my home from some recent bad vibe-producing events. (Landlord troubles!) I imagine that the skillful use of the proper herbs could help in warding and banishing ceremonies as well, if used properly and with reverence.

The three most used plant material for smudging are sage of all types, cedar, and sweetgrass.

There are two major genii and several varieties of each genus of sage that are used for smudging. Salvia, or the herb sage used for cooking, comes in two major varieties: S. Officinalis, commonly known as garden sage, and S. Apiana, commonly known as white sage. Salvia varieties have long been acknowledged as healing herbs, reflected in the fact that its genus name comes from the Latin root word salvare, which is the verb “to heal” or “to save.”

Artemisia is the genus commonly considered Sagebrush, and is more common in the wilds out here in California. There are two major varieties to the Artemisia genus: A. Californica, or common sagebrush, and A. Vulgaris, or mugwort. There are many other varieties of both Salvia and Artemisia, and all are effective in smudging.

Sage is burned in smudging ceremonies to drive out evil spirits, negative thoughts and feelings, and to keep Gan’n (negative entities) away from areas where ceremonies take place. In the Plains Sweatlodge, the floor of the structure is strewn with sage leaves for the participants to rub on their bodies during the sweat. Sage is also used in keeping sacred objects like pipes or peyote wands safe from negative influence. In the Sioux nation, the Sacred Pipe is kept in a bundle with sage boughs. I would think special crystals could be so protected this way as well.

Cedar is burnt while praying to the Great Spirit (Usen’, the Source — also known to Plains Nations as Wakan Tanka) in meditation, and also to bless a house before moving in as is the tradition in the Northwest and Western Canada.

It works both as a purifier and as a way to attract good energy in your direction. It is usually available in herb stores in chipped form, which must be sprinkled over a charcoal in a brazier. I like a piece of charcoaled mesquite for this purpose, rather than the commercial charcoal cake. 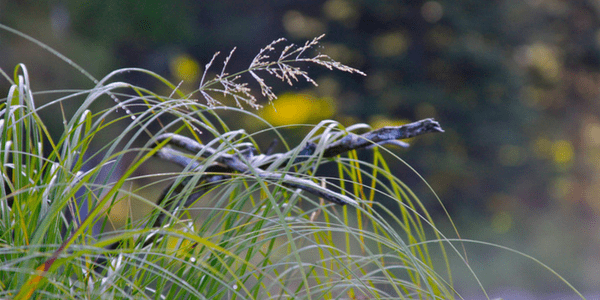 Very important to the Sioux and Cherokee nations, its botanical name is Hierochloe oderata. In these tribes, the sweetgrass is braided like hair braids. It could be burnt by lighting the end of it, or (more economically) by shaving little bits of it onto charcoal in a brazier. Again, use charcoaled mesquite (I believe it comes packaged for barbecue use under the brand name Red Arrow) to burn it, not pressed charcoal tablets.

Sweetgrass is burnt after smudging with sage, to welcome in good influences after the bad had been driven out. Sweetgrass is very rare today, and traditional Plains people have been attempting to protect the last of it.

Myself, I believe that cedar, which is not endangered, can safely be used this way. Also pinon pine needles (used more frequently by the Southwest Teneh, like the Navajo and Apache as well as the Pueblo people and the Zuni) and Copal (used by the Yaqui and in ancient times by the Azteca and the Maya) have similar effect. The three mentioned here are readily available either through gathering yourself or, in the case of copal resin, from any good herb shop.

Burn clippings of the herb in a brazier… not a shell as some new age shamanic circles do… it is an insult to White Painted Woman (The Goddess) to do this, especially with the abalone shell which is especially sacred to Her. If the herb is bundled in a wand, you can also light the end of the wand that isn’t woody and use that. I like the latter way.

Direct the smoke with your hands or with a peyote (feather) wand over the person or thing you wish to smudge. If you can see auras, look for discoloured places in the aura and direct the healing smoke towards those places on the patient’s body.

For cleansing a house, first offer cedar smoke to the four directions outside the house. Then, take a sage bough and go throughout the inside of the house, making sure the smoke penetrates every nook and cranny of the house. It might help also, if you have a power animal, to visualize your animal doing these things, to also dance your animal, and if you have a power song, to sing that too. Then finally, run through the house with a white candle that is well protected, to “light up” the house. Careful not to burn it down when you do it!

Smudging should be done with care, with reverence, and in an attitude of love. Show your respect and honour to the plants that Usen’ has given us for our healing, and they will return the favor by keeping us well and free from disease and negative energy.

Aloe vera plants, though not to be burnt, are good for the cleansing angle as well. Keep one or more potted aloe veras in the house (modern varieties are too tender to plant in anything but full shade outside) in organic (wood or ceramic, never plastic or metal) pots. To honour the plant when you transplant it, sprinkle the roots with corn meal and smudge it with cedar once it is transplanted. The spirit of aloe vera is a good protective spirit, and if you burn yourself, can also be used to heal your skin. Be sure to ask the plant’s permission before cutting part of the leaf off for the healing juice. If you don’t, the protective power of the plant will cease, and you will be left with but an inert houseplant… and perhaps some bad karma to boot. Hi-dicho, it is finished… Enjoy!